80s pop legend Alison Moyet became involved in a row with city councillors this week over plans to change the meals on wheels service in Brighton and Hove. 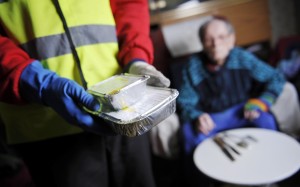 Ms Moyet, who lives in Brighton, had been told by a Twitter follower that the council was planning to withdraw the service from April, prompting her to tweet a stern message to Brighton and Hove.

As we know, for some old people #MealsOnWheels is the only comfort & contact they get. They paid their dues. Looking at you Brighton & Hove

But council leader Warren Morgan later told her that although the service is due to get a redesign, hot meal deliveries would continue to whoever currently gets them and still wants them.

However, until details go before the council’s health and wellbeing board in early March, it is not clear whether meals will be more expensive under the new service or not.

In a press release sent out shortly after Ms Moyet’s tweet, the board’s chair Cllr Daniel Yates said: “There are now only around 80 clients that the council funds who receive this service. People have been voting with their feet because these days they have a lot more options such as shared meals and lunch clubs, ready meals from supermarkets and internet ordering.

“We have to adapt the service to address the preferences of the 21st century as it is clear to us that the service needs to be delivered in a different way in future.

“Through research we have carried out into the local market we know there are a number of other local providers interested in providing the service.

“These providers are able and willing to meet the food quality and nutrition standards we require, and are also committed to carrying out the basic well-being checks that we regard as a vital part of the community meals service.

“We know that with a menu of Community Meals providers we can offer a broader range of choices for residents that meet their needs 365 days a year.

“We are working with these providers and the city’s Food Partnership on a new community meal ‘menu’ that will have a range of suppliers offering a wider range of meal choices.

“Shared meals are a big success story in the city, with around half a million served every year. We are also working to raise awareness of these among our clients as shared meals can help reduce loneliness and isolation and provide opportunities for advice and support, as well as offering a nutritious meal.”

The council says it is working closely with its current supplier RVS to ensure a smooth transition to the new-style service at the beginning of April.