A light fall of snow dusted parts of Brighton and Hove late this evening (Sunday 14 February).

The Met Office issued a severe weather warning and said: “Please be aware of the potential for difficult travelling conditions.”

The train operator Southern also warned commuters to check whether services were running before setting off in the morning.

Southern said: “Due to the forecast poor weather conditions of snow and ice forecast overnight and into Monday morning passengers should check their journey before they travel. Passengers should take extra care when on and around the station. 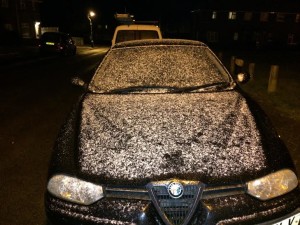 “Southern and Network Rail are running de-icer and ghost trains overnight to help prevent the build-up of snow and ice on the conductor rail.”

The Met Office said: “Showers of sleet and snow are likely at times during Sunday and overnight into Monday.”

The official forecaster said that showers “will generally be a mix of sleet and hail near coasts”, adding: “Accumulations of 0cm to 2cm of snow are likely in places at low levels but locally 2cm to 5cm over hills and where showers become aligned in bands in the north easterly flow.

“Ice will be an additional hazard overnight, particularly after showers.

“Please be aware of the potential for difficult travelling conditions.

“The colder air mass already established across Scotland and the north of England will continue south to affect most other parts by Sunday evening.

“Not everywhere will see the snow showers but some may become aligned in bands from time to time.

“Ice will also be a hazard on untreated surfaces, particularly between showers overnight, with those areas just inland from the coasts of eastern and south east England at particular risk as the showers will fall as a wintry mix.”

The northerly winds will chill the air in and around Brighton and Hove as the clouds lift and the gusts pick up overnight. But it will be a mostly clear day on Monday (15 February) and Tuesday (16 February).

The wind will switch back to the prevailing south westerly direction on Tuesday, bringing some cloud and a modest rise in temperatures, followed by rain again on Wednesday and Thursday.

About half an inch is expected to fall in just over 24 hours. Parts of Patcham remain on flood alert.