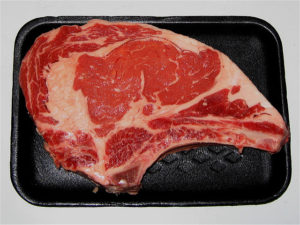 A convenience store in one of Brighton’s most desirable areas has been hit by a string of steak thefts in the past few weeks.

After regularly having its stock of steaks cleared out by shoplifters, the Fiveways Co-Op store has now put up a sign informing customers that if they want to buy the premium beef product, they need to ask a member of staff.

The store, in Preston Drove, says that the problems have been ongoing for the past three or four weeks, but are not believed to be the work of one thief as more than one person has been caught.

Duty manager Sam Bignell said: “It’s been quite a significant problem, probably for the last three or four weeks now. Some days they will wipe us clean and get ten or 12 steaks, and other days there might only be one or two on the shelf.

“Shoplifting has always been a problem, but it’s getting progressively worse. It’s various people. I caught one the other day, and someone else has been arrested over an incident on May 27.

“I put it down to the store being small and busy, with staff having to be on the tills, and the lack of a guard. Schoolchildren are also a problem.

“At the moment, putting up a sign is all we can do.”

The  difference between Fiveways’ reputation as a posh area and the shoplifting spree amused some customers. Jo Drage said: “I popped into Fiveways Co Op and there’s a sign on the fridge saying if you want steak you have to request it, as there have been so many thefts recently they’ve been removed from display!

“At Fiveways? I’m shocked! All those yummy mummies and hipster daddies are not what they seem.”