A new tourist information sign is to be replaced after it was spotted it was still giving directions to the Brighton Wheel. 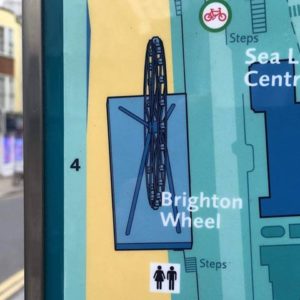 The sign in St James’s Street was put up in March, just two months before the wheel was due to be dismantled after a lease extension was refused because it was deemed competition for the i360, due to open this summer.

The mistake was spotted by a resident, and a picture posted on Facebook, prompting an exasperated response from council leader Warren Morgan.

Cllr Morgan said: “The signs were commissioned by the Green administration. Has taken years for them to go up and they are out of date already. Is it any wonder the council was on track to spend over £8m more than it had coming in during the past financial year?

“The sign will be changed and I’ve asked for an explanation as to why it happened. The decision on the wheel was made before I took over and I’ve been clear my preference would have been for it to stay.”

One seafront trader, Ken Frost, said: “Many tourists keep asking where the wheel is. When told that it has gone they all ask why did the council do something so stupid?”

A council spokesperson said: “In March an error resulted in a wayfinding sign being installed which included an icon of the Brighton Wheel, an attraction due to be dismantled a couple of months later. This sign will soon be corrected for the cost of £150 and the base map, from which the city’s signs are generated, has been updated.

“The council’s sustainable travel transition year fund will cover the costs for updating this sign. This fund is a one year grant from the Department for Transport to cover various schemes including wayfinding signs.

“£1billion of work is planned or underway to transform our seafront. Due to the number of innovative projects being proposed, regular updates will be needed to signs guiding visitors to attractions. In the future, we will be looking to seek the costs for changing seafront signage from developers.”

The i360 says it is still due to open this summer, although its opening date appears to have been pushed back. Test flights were due to start in March, but the first small movements only began this month.