Pair jailed for 25 years for grooming and abusing teenage girls

A court heard from the teenage victims of two Hove sex attackers about how being groomed and abused had turned their lives upside down. 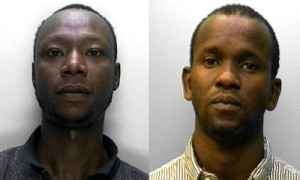 Osmon Koroma and Max N’Gasa were sentenced to a total of 25 years in prison after being convicted of a string of sexual offences including rape, sexual assault against 12 young girls.

Before they were sentenced, victim impact statements were given to the judge. Extracts released by Sussex Police today paint a harrowing picture of how they have been scarred by their experiences.

One said: “I was 13 when I was a victim. I realise I was young at the time but I was a loud outgoing confident person who was happy to socialise in large groups and I would have a large group of friends.

“When it happened to me I started to question why it happened and did I do something to deserve it? It made me change completely and I became a completely different person because of it.

“I was scared to go out in large groups. At the time I had a large group of male friends. However, I no longer trusted them and didn’t know what they would do to me so I simply stopped hanging around with them.

“My self esteem is really low now. I am self harming which I use as a release.”

Another said: “I don’t want it to happen to anyone else. When I think about my family it has been added stress for them not just back when it all happened but because of the investigation and police too.

“No parent wants to know anything like that happening to their daughter, especially at that age.

“I think about those times it happened, I feel sick. Not sick in my stomach but in my head. I feel angry. Not just at them but at myself, for putting myself in that situation.

“I’m angry that my mum warned me to stay away and I still kept going there. Back then I thought, why not. I didn’t think I was doing anything wrong. I had never taken drugs before I met Ozzy and Maxi.”

A third said she had lost three stone in weight and still didn’t want to eat. Another said she had learnt not to trust people. And one simply said: “I feel worthless.”

Koroma, a labourer, 31, was jailed for 14 years for eight offences against five girls. They were one rape, two sexual assaults and five offences of sexual activity with a child.

N’Gasa, a gardener, 25, was jailed for 11 years for 10 offences against seven girls – two offences of rape and eight offences of sexual activity with a child.

N’Gasa had been found not guilty of one sexual assault and one offence of attempting to carry out sexual activity with a child.

Both men were living in Littlehampton when they abused the girls and lived in Hove at bail addresses only for the seven months before they were charged. They have been in custody since last October.

Koroma and N’Gasa were arrested on Thursday 12 March last year and were charged in October. They were brought to justice after an intelligence-led child sexual exploitation investigation by detectives from the Sussex Police Safeguarding Investigation Unit (SIU), working with partners including West Sussex County Council Children’s Services.

The investigation focused on reports that local teenage girls, known to the suspects, were being sexually exploited.

After the men were jailed at Lewes Crown Court today (Tuesday 7 June), Detective Chief Inspector Miles Ockwell said: “We are glad to know that justice has now been done for the girls.

“As Judge Jeremy Gold said in passing the sentences, it was clear that Koroma’s flat acted as a magnet for the girls, whose physical maturity outstripped their emotional maturity.

“He observed that Koroma and Ngasa were warned by the police in July 2012 about their behaviour but chose to ignore the warning.

“When the investigation re-commenced in 2014 the full extent of their behaviour became apparent.

“Judge Gold commended all the girls without exception for giving evidence, especially in view of being called liars or told they were mistaken while giving evidence.

“When referring to the victim personal statements, he stated that Koroma and Ngasa’s actions have had a profound and lasting effect on the girls.

“Young girls were sexually abused by one or other of these defendants and sometimes by both.

“The evidence centred around a flat above a parade of shops in Wick Parade, Littlehampton. Osman Koroma lived there during those years and Max N’Gasa was his friend and a frequent visitor there.

“Both men befriended young schoolgirls who would frequent the shopping parade, groomed them and ultimately exploited them by requesting sexual acts in return for purchasing cigarettes and alcohol on their behalf.

“Some of the victims knew each other, but others did not, as this offending went on with numerous children over four years.

“Such was the level of grooming that took place, many of the girls considered that they were in relationships with the pair, despite the obvious significant age gap between them.

“Both men, when arrested and interviewed, made complete denials saying that they had never met and did not know the victims and they have maintained this position throughout the trial.

“In doing so, they have made their victims have to relive their ordeals all over again by having to tell their stories in court.

“I want to pay tribute to all of the girls who had the courage to stand up in court and tell their stories. In doing so, they have undoubtedly saved other children who may have been targeted by this pair.

“This is a significant case in that it serves to send a message to those who might seek to sexually exploit children within our communities that we, Sussex Police will work with the public and our partners to pursue offenders and bring them to justice as we have done here.

“It also serves as a message to the public that child sexual exploitation does occur in Sussex and it is important that we all understand the tell-tale signs that might suggest that a child is at risk being exploited.”

An NSPCC spokesperson said: “These depraved individuals duped 12 young, vulnerable girls into believing they were in a committed relationship.

“The truth was, the girls had been systematically groomed and sexually exploited over four years. The custodial sentences rightly send the message that child sexual exploitation must stop.

He added: “Recent developments in Sussex Police include the introduction of fully integrated Safeguarding Investigation Units, responsible for safeguarding and investigation in relation to all vulnerable people, especially children.

“We also now have police officers and staff working in integrated teams assessing all such reports, and a Complex Abuse Unit which takes on cases of this type. But we will continue to examine, with our partners, ways in which our work can be even more effective.

“There is a lot of material available on the internet and I would encourage people to visit our website at http://www.sussex.police.uk/advice/protect-yourself-and-others/child-protection/child-sexual-exploitation-cse/

“Anyone who has any other concerns on learning of this case can always contact us via 101@sussex.pnn.police.uk or call 101, quoting Operation Staple. and arrange to talk in confidence to experienced detectives.

“Sources of counselling and support for anyone who is affected by news of this case or any similar cases is always available through the Saturn Centre (the Sussex Sexual Assault Referral Clinic) on 01293 600469 (9am to 5pm with a 24 hours answerphone) or on their out of hours helpline 0800 033 7797.”