The A259 coast road has been closed tonight after a police car driven by a PCSO crashed into a parade of shops. 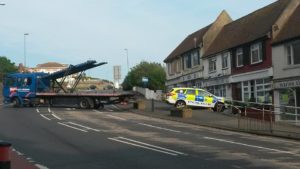 The squad car was travelling westbound along the A259 when the crash happened at about 5.45pm.

A police spokeswoman said: “A police car has been involved in an accident in Rottingdean.

“Neither the PCSO driving or any other person has been injured.

“A police supervisor is on the scene and investigating the circumstances.”

Although it appears the car careered towards shops, including Coastway Vets, it was stopped when it hit the railings.

By 6.45pm, traffic going through Rottingdean was at a standstill as a recovery truck retrieved the police car.