Man airlifted after slipping on rocks off Saltdean beach 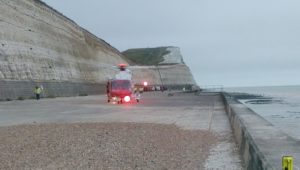 A young man was airlifted from the rocks off Saltdean beach after slipping and badly breaking his ankle yesterday evening.

The Newhaven Coastguard was called at 7.19pm to rocks near Saltdean Lido after the man slipped, seriously injuring his ankle and also banging his head.

It was deemed too dangerous to stretcher the 20-year-old casualty and so the Coastguard Rescue Helicopter was used to winch him from the rocks and land him on the promenade where an ambulance was waiting.

Video courtesy of The Saltdean Zone

The Newhaven Coastguard said: “Paramedics were with the casualty when we arrived. The casualty had sustained a serious ankle injury and also banged their head during a slip.

“The casualty was located a considerable distance from the eastern end of the promenade. Walking the casualty out on a stretcher was considered and our flank team from Shoreham were paged to assist.

“Coastguard Rescue helicopter 163 was tasked and once on scene winched the casualty from the rocks and landed on the promenade where the casualty was handed into the care of to a waiting land ambulance.”

A spokeswoman for South East Coast Ambulance Service said: “We were called at approximately 6.45pm yesterday evening to reports a 20-year-old man had fallen on the rocks near the Lido at Saltdean.

“We dispatched an ambulance car and an ambulance crew to the scene. Coastguard was also involved in the rescue and air ambulance was alerted. The man suffered an open leg and ankle fracture and was taken to the Royal Sussex County Hospital for emergency treatment to his leg.”