To Peter James, he is the “Sheriff of Brighton” and provided real-life inspiration for some of the stories in his best-selling Roy Grace crime novels.

Now Graham Bartlett, Brighton and Hove’s former police commander, has written a book of his own, telling it how it really is, policing Roy Grace’s Brighton.

And in a reversal of roles, he turned to Mr James as he researched the best way to write a book and find an agent and publisher.

The book – Death Comes Knocking – went on sale on Thursday (14 July) with a launch event in the Old Police Cells Museum in Brighton Town Hall.

It was organised with City Books – run by Paul and Inge Sweetman – of Western Road, Hove. 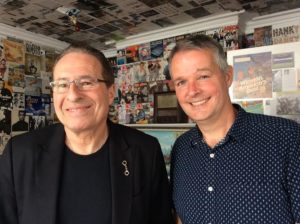 Mr James said: “A lot of my fans over the years have said, you do so much research for your books. It would be great if you wrote some non-fiction and gave us the background.

“I think he genuinely liked the fact that I portrayed the police in a fair way and showed the public what policing is really like and not what you see in a lot of television and fiction.”

Given all that, when Mr Bartlett wanted to write about the reality of policing, Mr James was more than happy to collaborate.

Mr Bartlett served in the force for 30 years and held every rank from PC to Chief Superintendent in Brighton and Hove during that time. He appears as Graham Barrington in the Roy Grace novels. 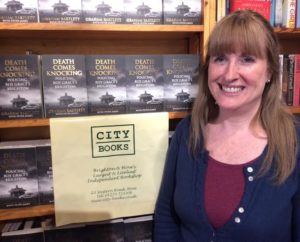 “In terms of writing style, he’s been a real eye-opener. His experience and expertise are absolutely incredible. He makes it look very easy.

“I know so many people who used to say, I never used to read until I read a Peter James book.

“He’s so passionate about his craft and helping other people enter that world. He’s got an infrastructure around him – agents, publishers – and that’s where I feel he’s like my Simon Cowell on the X-Factor. I’m really grateful for the help he’s given me getting a book on the shelf.

“It’s not only to show the link between fiction and non-fiction but also to get under the skin of what it’s really like to be in the police.

“It deals with some of the sadder parts of the policing as well as the lighter side of it.

“For me it’s been an opportunity to show from a personal perspective what it’s been like to police at every rank a cosmopolitan city like Brighton and Hove.”

Mr James said that Tesco had become the first supermarket to order copies and that, if pre-orders are any indication, there could well be demand for a sequel. He added: “We’ve already got plans.”

This evening Mr Bartlett is promoting the book at an event in Worthing Library at 7pm. He and Mr James will be at the Ropetackle, in Shoreham, on Wednesday 27 July at 7pm and at Mr Bartlett is due at Steyning Bookshop the next evening.