A Brighton man has pleaded guilty to a transphobic public order offence, after targeting his victim on two separate occasions. 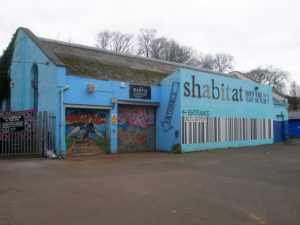 Shabitat, where one of the verbal attacks happened. Picture by Simon Carey from www.geograph.org.uk

Matthew Sullivan, 35, of Ladysmith Road, appeared before Brighton Magistrates on July 6 charged with using threatening, abusive or insulting words or behaviour to cause harassment, alarm or distress.

He was ordered to undertake 55 hours of unpaid work as well as paying a total of £210, which includes which includes costs and the Victim Surcharge, which helps fund victim support services. His sentence was increased due to the transgender factor in his offending..

Sullivan, was arrested following two incidents where he had verbally abused his victim, Sian at businesses in Lewes Road, Brighton, on 19 February this year and November 25 last year.

She was shopping in Sainsburys on the first occasion, and Shabitat on the second occasion, when Sullivan who is a stranger to her, subjected her to the abuse.

These incidents are not the first in which Sian, who is in her thirties and lives Brighton, has experienced transphobic hostility from strangers in the city.

She said, “I started to notice I wasn’t confident going out. I started to question my life. Would I ever be accepted?

“The hardest thing was getting over my mistrust of the police and actually contacting them over the matter.

“The abuse had all got too much. I just wanted it all to stop so I could walk down the street without fear of being abused, for just living my life. I was surprised by how seriously the matter was taken, not just by the police, but by the courts.

“I was taken seriously throughout and now feel more confident in reporting matters to the police; I also feel the courts will hand down appropriate sentences. It was difficult, but I was given support throughout to see the process through to the end.

“I can now walk down the street, free from fear, and get on with my life.”

PC Sarah Laker, of Brighton and Hove’s LGBT Police team, said: “We are delighted that Sullivan has been convicted of these offences against Sian and that the court imposed an increased sentence because of the transphobic nature of the offences.

“We gave additional support to Sian as the investigation was progressing to reassure her that we take transphobic hate very seriously and to help colleagues understand the transgender aspect of the crime. The support of the LGBT team also included accompanying Sian to court on the day of the trial.”

“Sian was provided with screens at court so that she would not have to see the defendant when giving her evidence at the trial. However, on the day itself, Sullivan pleaded guilty so neither Sian nor the witnesses were required to give evidence.

“It can take bravery to come forward and make a report to the police, and even more so the need for patience with the investigation and it’s progression through to court. We hope her positive experience will encourage others to come forward.

“The police will always be compassionate and professional when dealing with victims. Not all victims want their case to go to court, some may prefer a restorative outcome. We will always take the victims’ wishes into consideration.

“Our hope is that this case will encourage other victims of hate crime to report such behaviour to police by calling 101 or 999 in an emergency. For those wishing to make a report online, use the form available on our website.”