Mr Toumazi will leave the County Ground in Hove at the end of the year, having joined Sussex County Cricket Club in January 2013. He took over as chief executive from Dave Brooks.

He carried out a fundamental strategic review of the club’s professional cricket structure, including the organisation of the academy.

But the county side failed to win promotion back to the top flight of the county championship after being relegated last season. 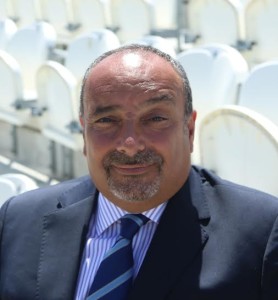 Mr Toumazi also chaired the Employer Skills Task Force set up a year ago by Brighton and Hove City Council. The task force reported earlier this year, challenging local businesses to create a thousand apprenticeships in a thousand days.

After a career in the financial services sector – he worked for Salomon Brothers, now part of Citigroup, and Goldman Sachs – Mr Toumazi held senior commercial posts at Surrey and Hampshire county cricket clubs.

Mr Toumazi said: “It has been a difficult decision to make but I do believe that it is right for me to move on and hand over the reins to a successor.

“The role of CEO of such a great club has been a privilege and an honour. I have enjoyed my time at Sussex and leave behind an excellent team that is set for the future.

“Our professional cricket is poised for exciting times ahead under the new management team, our academy is bearing fruit with the young players coming through the programme and I am sure that trophies are not too far away.

“I take away many fond memories and lasting friendships. A special thank you to our members and partners who have been an absolute delight to interact with and who are always ready to support. I have no doubt that the future is bright for Good Old Sussex by the Sea.”

Sussex chairman Jim May added: “Zac Toumazi has been a very professional and well respected chief executive who has brought great energy to the role and has been a great ambassador for Sussex.

“Aside from overseeing the ground-breaking formation of Sussex Cricket, Zac has accomplished much including the restructure of our pro-cricket department and has helped drive our commercial business.

“He will be rightly remembered as a man with strong values whose interpersonal skills have helped strengthen our relationships with a wide range of stakeholders. Zac has been an excellent chief executive who leaves Sussex with our very best wishes, and, in very good shape for his successor.”