Ping pong champion Harry Fairchild has reopened Brighton Table Tennis Club after the completion of the first stage of a £500,000 refurbishment.

The UK Down Syndrome table tennis champion officially reopened the club at the Fitzherbert Centre, in Kemp Town.

The ribbon cutting marked the end of the first stage of a major transformation programme costing £400,000 to renovate the outside of the building.

It is owed by the Parish of St John the Baptist, in the Roman Catholic Diocese of Arundel and Brighton. The parish is led by Canon David Foley.

Now, with the help of a Table Tennis England grant of £100,000, the club is about to start work on renovating the inside of the building.

Mr Fairchild, the world’s first qualified coach with Down Syndrome, is one of the more than 300 people who play at the club each week. 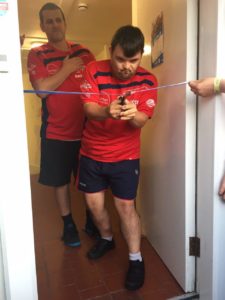 It is open seven days a week to players of all ages and abilities and runs special sessions for people with learning difficulties, looked after children, under 16s, and over 60s. Two women-only sessions are held each week.

Founder and trustee Harry McCarney said: “The building has been transformed since July 2015 when we moved in.

“Having a secure base of our own has been central to the BTTC’s rapid development in the past year.

“We are now recognised as one of the leading table tennis clubs in England and an important community asset in Brighton and Hove that is bringing significant sums of money into the city to support sport.

“We thank Canon Foley and the Parish of St John the Baptist, in the Roman Catholic Diocese of Arundel and Brighton, for granting the club a long lease on the Fitzherbert Centre and for investing funds into the outside of the building.

“We are also grateful to Table Tennis England for the grant which will make the inside refurbishment possible.”

It also won the first national Community Integration Award for the way it brings together young people from the city and from around the world – from Aleppo to Vietnam – through table tennis. 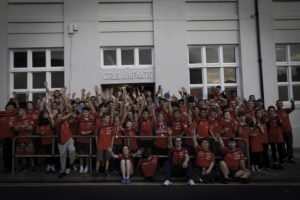 It has forged links with Brighton Housing Trust to provide table tennis and coaching for homeless men and women at the BHT’s First Base centre.

The club runs regular coaching sessions in five secondary schools and eight primaries – and more than 260 students play across three campuses each week at City College where the club provides coaches for six weekly sessions.

More than 40 people play at the 50+ sessions at the King Alfred Leisure Centre each week. In addition, table tennis is played on the 30 outdoor tables scattered across Brighton and Hove.

“The club’s aim is to provide as many opportunities as possible for as many people as possible to come together in our city across a table tennis net.”