Trains from Brighton and Hove seemed “eerily quiet” this morning as thousands of commuters decided to work at home rather than try and struggle in on the strike-hit Brighton mainline. 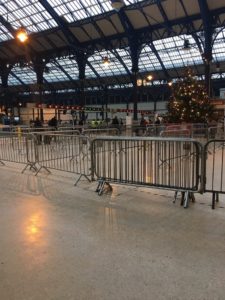 A protest is being called by angry passengers at London Victoria on Thursday at 5.30pm as the government, unions and train operator GTR continue to row with each other.

But in the meantime, most people are doing what they can to avoid travelling on trains altogether, with all Southern services cancelled, Gatwick Express only running to London, leaving only Thameslink trains to take people from Brighton to London.

Others have chartered coaches to make the trip, or have arranged to stay in London or just taken the time off work altogether.

Commuter Kate Lodge said: “The 0800 Brighton to Bedford train was eerily quiet this morning until it reached East Croydon and then it was rammed as per usual.”

And Tessa Cobley said: “People I’ve spoken to have had good journeys – trains that are on the timetables/journey apps are running and are mostly quiet. One friend did Preston Park to East Croydon and changed and found that spookily quiet but fine.”

However, it’s possible that tomorrow will be a different story as people see the pictures of quiet trains and decide to attempt the journey. And those which have managed to get in this morning are apprehensive about the journey home.

Another commuter, Paul Zara, said: I have been travelling regularly between Brighton and London since 1990. Commuting for around 15 years and since then travelling up regularly for business. And never, ever have things been this bad.

“The stress of arriving at Brighton Station any time, not necessarily a strike day, to find bewildered passengers staring at a board of delayed and cancelled trains, is getting overwhelming.

“I, like many others, allow an extra hour for the journey if I have a important meeting. Even then I often only just make it, or arrive late flustered and embarrassed. Or I’m way too early and sit in a coffee shop killing time.

“The real cost of this dispute is impossible to measure. We’ve recently been told about lost jobs and broken relationships. It’s affecting us all. I’m exhausted and I know plenty of others who are too.

“And the hugest frustration in that nobody seems to want to sort it out. The government say they can do nothing (obviously not true – they control the franchise). Southern say they will talk but are pressing on with making the changes to staffing. The unions say they will talk but repeat their ‘facts’ about safety without any clear evidence to back them up.

“Frankly we don’t care any more who opens and shuts the bloody doors. We don’t care about getting money back for late running trains.

“We just want to get a train that’s reasonably on time and a seat would be nice. It’s not too much to ask really, is it?

“So unions, train companies and government – give us the only Christmas present we really want – an end to this crazy dispute.”

Congrats to #southernrailuk for helping Brighton Station achieve their dream of a carbon neutral service. Take note, rest of the world!

A spokesman for GTR said: “As we have no Southern services running today, that means 300,000 Southern passengers will be affected one way or another.

“The vast majority have heeded the advice not to travel, and those who have attempted to travel have either found alternative modes of transport or used Thameslink and Gatwick Express services.

“Although we have no official figures, we are in contact with our people on the ground who tell us that yes, stations have been quiet today – again this shows that people have got the message not to travel today.

“Having said all of that, we do have extra people at our traditionally busiest stations and should the need arise, crowd control measures will be put in place.

“So far, we’ve not had to instigate any of this although there was a large number of people using Great Western services from Brighton this morning and a queuing system was put in place briefly.” 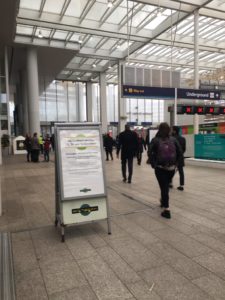 A quiet London Bridge this morning. Picture by Paul Zara

Emily Yates of the Association of British Commuters, which is organising Thursday’s protest, said: “The British public should know that Southern commuters have experienced a year-long nightmare with the collapse of Southern Rail.

“We have desperately called for government action and have been repeatedly ignored; even while many of us have lost our jobs, or relocated our homes because of it.

“Our thousands-strong network of commuters has been at the centre of this catastrophe throughout; and with the complete lack of government action on the matter, many have put all their efforts into investigating the true story behind the crisis.

“What is rotten in Southern Rail started long before the current industrial action; which now takes place on top of a broken infrastructure, chronic understaffing and a company whose relations with the public have irretrievably broken.

“Its relationship with the Department for Transport is that of a subcontractor, not a typical franchise; therefore, it is firmly within their remit to step in, and their urgent responsibility.”

Hove MP Peter Kyle said that he felt both furious and heartbroken at the deepening deterioration of the Southern rail service.

He said: “Two or three times since I became your MP I’ve thought our rail service has hit rock bottom, and then it gets worse. Last week in the Commons I told the rail minister that month after month I have heard ministers make pledges, promises, and announce new schemes and yet every single month the service gets worse and worse. I am totally despairing.

“Today thousands of people are stranded, unable to get to work, to shop for Christmas, or to see the people they love. I feel two things. Firstly I am boiling with fury at every organisation responsible for our rail service who chooses – it is a choice – to wage war against another part of the service rather than take steps towards solving this problem. Both sides in this dispute are obstinate and government continue to sit passively in the shadows, too cowardly to step up to the challenge of being an active partner in solving this dispute.

“My anger towards all of these parties know no bounds, not least because they have made me powerless to advocate for you, the passengers who turn to me at times like these, and I hate the powerlessness that has accompanied this nightmare.

“Secondly I feel heartbroken for passengers affected. Each week I read many hundreds of messages and speak directly to dozens of people affected. I’ve spoken to people who have lost their jobs or given up their jobs, and who’s businesses has suffered. I’ve heard from people who are on medication due to the distress of travelling on overcrowded and late running trains, and I’ve spoken to a man who was traumatised by the sight of another passenger having a breakdown by a platform edge. I’ve lost count of the number of people who’ve told me of the heartbreak of missing out on family time. And then there’s the anger, raw and unmitigated, of people being treated in utterly inhumane ways by an uncaring, unapologetic, and inaccessible rail network.

“People rightly ask me, ‘what are you doing’. It’s a good question. In the last fortnight I’ve written to the prime minister, spoken in the Commons, met the rail minister twice, and chaired a meeting of the group I set up with Sir Nicholas Soams that includes every MP in the Southern commuter area. I’ve also been in constant touch with the Albion regarding the dangerous situation that occurred there a short while ago.

“I’ve met several times with Chris Gibb who’s been appointed by government to complete an independent review of the Southern region to deliver improvements in the short and medium term. His report is handed to government in January and I’ve already read his initial findings which are extremely detailed and I believe, if government act on them, will have a big impact on the infrastructure of our service.

“This is one area where media pressure is having an impact too, so I’ve been out not eh airwaves as much as I can to tell the broader public just how bad things are. From the papers, where I’ve been in the Times, Guardian, and Telegraph in the last week, to TV where I’ve been on almost every station, to the radio and social media….I’m doing everything I can humanly do to put pressure on government to do something to end our misery.

“I’m at work today because I have a London-based kind and generous friend who also happens to have a sofa-bed. I\m well aware that I can do this because I have such a friend but I also don’t have a family so it’s not the end of the world if I don’t make it home at night. But for others it’s very different and it’s those people whoa re suffering most at this time.

“If you can think of anything I could do that I am not then please let me know and if it has a hope of making a difference then I’ll do it without hesitation.

“I know many of the people who are reading this are genuinely suffering because of this situation. Please believe me when I say how sorry I am that you have to endure this, I am doing everything I can and I won’t give up.”