Jessie Reeves’s carol will be now be played throughout the Christmas period on Radio 3.

She beat hundreds of amateur musicians from across the country to be crowned the winner of the competition live on air yesterday morning (Thursday 22 December).

The classical music station challenged amateur composers to compose music for a modern version of the medieval English poem Alleluia! A new work is come on hand.

Miss Reeves, 24, who began studying on the university’s one-year PGCE in secondary music this September, has already had her piece played several times on Radio 3 since making the shortlist. She won the competition thanks to a public vote.

The Sussex student, who is currently on placement at Coloma Convent Girls School in Croydon, said: “I’m delighted to have won. I really wanted to create a song that sticks in people’s minds and is really Christmassy.

“I quite like music that’s a bit slushy and twee – and it very much suits Christmas. People like twee at Christmas.” 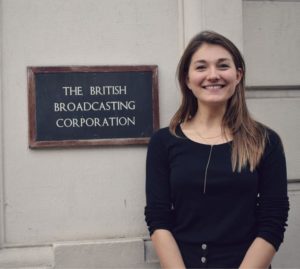 Sussex University vice-chancellor Adam Tickell said: “This is a tremendous achievement and such a beautiful carol.

“Jessie’s creativity and love of singing shine through in her original setting of these medieval words.

“I’d like to pass on my congratulations on behalf of everyone at the University of Sussex – thank you Jessie for getting us all in the festive spirit.

“We’re so proud of you. Your school pupils are lucky to be taught by a teacher of such musical ability.”

“We cover approaches to composition in the course but only in terms of teaching in the classroom – Jessie’s done this on her own.

“Everyone at the University of Sussex has been behind her. It’s such a memorable carol.”

Miss Reeves was originally inspired to write carols by an annual school competition which she won many times. She has written a new one every year since she was 11.

But her real passion is singing – and his year she joined the London-based choir, the Cantus Ensemble, as an alto.

One of the judges who shortlisted the hundreds of applications down to the final six for the competition, David Hill, chief conductor of the BBC Singers, said on Radio 3: “We’ve got a very worthy winner. Jessie’s produced something that’s a wonderful melody.”