A scheme to build four blocks of flats on a hilltop site in Hove, next to the A27 Brighton bypass, have won the backing of planning officials.

But a final decision on the £19 million scheme is due to be made by councillors at a meeting next week.

Thornton Properties, run by local developer Mike Holland, has applied to build 69 flats in four blocks at the top of King George VI Avenue – known as Snakey Hill – in Hove.

The scheme includes 28 affordable homes – or just over the 40 per cent required under local planning policies. And just over half of these would be for rent.

The existing ranch-style Court Farm House would be demolished along with the outbuildings where various vehicles are currently kept.

Mr Holland wants to put up two three-storey blocks and two four-storey blocks, containing one, two and three-bedroom flats. There would be 107 parking spaces for cars and 132 spaces for bikes. Most of the cars would be parked at basement level. 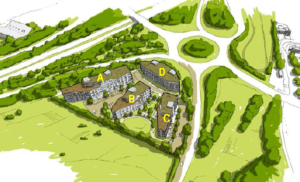 In 2012 Mr Holland submitted plans to build five houses and a three-storey nursing home on the site. Brighton and Hove City Council turned down the scheme but lost on appeal and was ordered to pay Mr Holland’s costs.

Planning consultant Simon Bareham, of Lewis and Co, has written to the council’s new head of planning Liz Hobden to make the case for the latest scheme.

Mr Bareham said: “The council’s housing supply problems are severe. The appeal proposals provide for (69 homes) in a well-designed scheme on a deliverable housing site.

In an assessment of the economic regeneration benefits of the scheme, a former senior local council officer Scott Marshall said
• 38 construction jobs would be created by the scheme
• It would support 57 jobs in the national economy
• 14 extra jobs in the local economy would be created by the scheme
• The council would receive £125,000 in new council tax receipts
• The council would receive £127,000 new homes bonus receipts
• The scheme would add £1.1 million in value to the local economy each year
• The benefits locally would top £10 million in the local economy over ten years

The council can also expect to receive a sum of about £420,000 from the developer, known in planning circles as a “section 106” contribution. Much of the money will be earmarked for schools and transport spending. 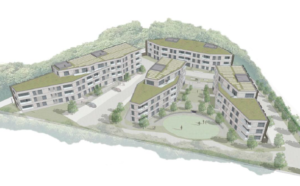 The site covers almost two and a half acres and overlooks Toad’s Hole Valley where hundreds of new homes are planned for much of the 116-acre space. Mr Holland only owns the hilltop site.

The council has been sent seven letters of objection to the scheme saying that
• The area is already congested with traffic, the roads are insufficient and the roundabout is notorious for delays. King George VI Avenue is already saturated and a new junction to cope with the extra vehicles would add to the problems and lead to more air pollution. At times the traffic would be dangerously fast for pedestrians.
• The site is not suitable for a high-density development despite the need for new housing and the shortage of suitable land in Brighton and Hove. The proposal is massively disproportionate in size and scale for the Court Farm House site.
• The site is high on a hill at the edge of the South Downs National Park. The scheme “is a complete modern monstrosity”. Buildings several storeys high would detrimentally affect the outstanding views from Hove towards the Downs and also from the Downs towards the sea. Detached houses would be better.

Councillor Vanessa Brown also wrote to oppose the plans. She said: “As a councillor for Hove Park Ward which adjoins this site I wish to object to this application because of the problems with traffic accessing and leaving it.

“My residents live directly opposite the site and so will be more affected by these plans than the residents in Hangleton and Knoll Ward. 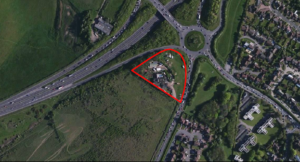 “King George VI Avenue is a very heavily used fast road directly off the roundabout at the junction of Dyke Road Avenue and the A27. It is the main road into Hove.

“This proposed entrance to (the flats) is just a short distance from the roundabout.

“The report states that a pedestrian refuge would be placed in King George VI Avenue for pedestrians to cross.

“This would be incredibly dangerous. The cars are supposed to travel at 40mph at that point but most travel much faster down this steep slope.”

A report to the council’s Planning Committee supports the scheme. The decision is due to made by the committee at Hove Town Hall on Wednesday (11 January). The meeting starts at 2pm and is open to the public.