A suspected gas leak at the Tesco Express store and Esso petrol station in Dyke Road led to it being closed this morning while engineers worked to make repairs. 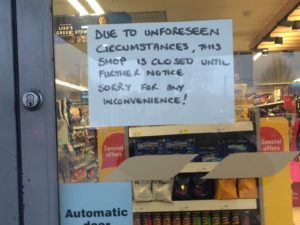 A member of the public called SGN, previously Southern Gas Networks, at 1.30am this morning, leading to the evacuation of both the convenience store and the petrol station.

Tesco says the store reopened this morning and that the issue is with the local highway.

Claire Buchanan, SGN spokeswoman, said: “We were called out to a report of a smell of gas at the Tesco Express store in Dyke Road, Brighton, around 1.30am this morning, attending in our role as the national gas emergency service for the south of England.

“A member of staff had done the right thing and called the National Gas Emergency number 0800 111999. As a safety precaution, the store was evacuated, including the petrol station.

“We are currently working outside the premises to make our repair as quickly as possible.”

A Tesco spokesman said: “The store was closed for a short while this morning but is now reopened. The issue is not to do with the store but the local highway and I understand their contractors are on site.”