An aid charity is coming to Brighton and Hove to collect old computers to help schools and clinics in Africa.

Computers 4 Africa is coming to the Sackville Trading Estate, in Hove, tomorrow (Thursday 23 February) and on Friday with an appeal for unwanted IT equipment.

All data is securely wiped before the computers are sent to Africa, with more than 340,000 children now using equipment supplied by Computers 4 Africa.

“Our ambition is to empower and equip all people – regardless of age, gender, ability or disability – by supplying IT equipment for training and humanitarian projects across the globe.”

The charity will be at the old Focus DIY premises on the Sackville Trading Estate from 10am to 4pm tomorrow and on Friday.

In a case study, Computers 4 Africa shared the story of a Kenyan nurse called Joyce Mbwaga who works in two villages. 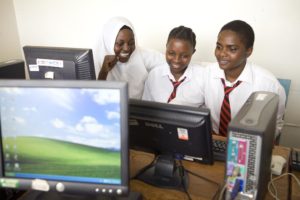 She was given a laptop and uses it every day to store medical data and records including details of patients with measles. Although treatable, measles can be fatal in poor areas where vaccines are not readily available.

By using the laptop, she was able to determine the origin and extent of the outbreak and the direction in which it was spreading.

As a result she stopped the measles outbreak in its tracks, saving lives and restoring the health of those in the two villages in her care.

A few months later, a similar situation arose with typhoid. Knowledge and data stored on her computer saved lives.

The award-winning charity – a Microsoft registered refurbisher – asked for equipment in working condition and less than eight years old.

Sharon Roberts said that reusing old machines had environmental benefits and added: “Your old IT will transform lives forever.”