A Brighton family was able to spend Christmas together thanks to their children raising the alarm when their dad collapsed at home in cardiac arrest. 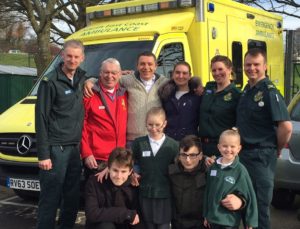 Sisters Lilly-May Williams, nine, and Miya-Rose Williams, six, were instructed to find their dad’s Rob Williams’ phone by older brother Grant Briant, 14, when Rob, 48, collapsed at the family’s then home in Eastbourne.

They trio have been praised for their swift actions on the morning of 10 November last year and received commendation certificates when the family and ambulance team were reunited at Carden Primary School in Brighton, where the girls are pupils.

The siblings worked together and contacted their mum Debbie who in turn dialled 999 as she rushed home from a shopping trip with a friend in a taxi.
Debbie remained calm as she explained the situation and was soon home where she and her friend followed advice over the phone and commenced CPR.

The team remained at scene for approximately two hours carrying out a complex resuscitation before Rob was stable enough to be taken to Eastbourne District General Hospital where he received further life-saving treatment.

Critical Care Paramedic Alan Cowley said: “I’m delighted that Rob has gone on to make such a good recovery and the family got to spend Christmas together.

Lilly-May, Miya-Rose and Grant all stayed remarkably calm and worked together to arrange the help Rob desperately needed. Debbie and Rob should be very proud of them all.

Debbie and her friend also did a great job in providing early CPR which is vital. Rob’s recovery is thanks to a chain of survival that included excellent call taking and dispatching, early by-stander CPR and advanced life support, including several enhanced interventions we were able to provide as CCPs, and of course expert care in hospital.”

Debbie said: “The girls are so young so they could have just frozen but they stayed calm and worked with Grant really well to let me know what was going on.

“We’re very proud and so grateful to everyone for what they did to help Rob. We were able to have a good Christmas and Rob is generally on the mend. It’s lovely that we’ve been able to meet with everyone and that the children’s actions have been recognised in this way.”

Rob added: “Without the dedication, professionalism and sheer determination to save my life I wouldn’t be here. The work of paramedics, doctors and everyone involved in giving life back, when all seems lost, is what makes all medical professionals the backbone of life and survival. They give people the chance to live again.”