A group of travellers have hopped from one private car park to another over the last few days, and are now camped on the Homebase car park on Old Shoreham Road. 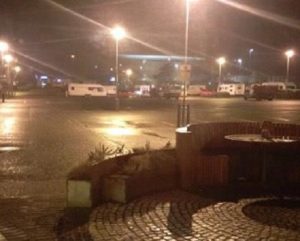 The camp first pitched up in the B & Q car park on Lewes Road in Brighton last week. On Friday evening, it moved to the Goldstone Retail Park in Hove and last night, it moved again to the nearby Homebase car park. Another camp has set up at Shoreham Harbour.

Although it is not unheard of for travellers to camp on private car parks, it is unusual and it’s possible that it could happen more often once the city council’s public space protection order (PSPO) preventing people from camping on many parks and open spaces starts being enforced next month.

Meanwhile, businesses say the camp is causing them disruption and are eager to see it moved on.

Sunny Khan, manager of Burger King at Goldstone, said that groups of children from the caravans were regularly coming into the restaurant and causing trouble by throwing food, drinks and napkins around.

He said: “They are coming in and throwing their drinks and customer’s drinks and tearing up the napkins. They’re using the toilets every hour and they’ve blocked them and they’re also running around the drive-in area which is dangerous.

“We called the police on Sunday and asked them to come but the police said they were too busy.”

A police spokeswoman said: “Police received a call from staff at Burger King restaurant in the Goldstone Retail Park, Newtown Road, Hove, on Sunday (12 March) at 5.45pm reporting that a group of six young children were throwing food and refusing to leave.

“The member of staff who called was told that the call had been graded for a response but unfortunately it was not be immediate as all the police units were committed to other jobs. He was advised to tell the children to leave the restaurant this time. They were removed by restaurant security staff.”

A council spokeswoman said: “An unauthorised encampment arrived in the city over the weekend and was initially located In the Goldstone Retail Park car park which is privately owned land.

“As it is private rather than public land the landowners are able to take action under common law and evicted the trespassers yesterday evening. They have now moved along the road to the Homebase car park which again is private land.

“As this is privately owned land the council does not have a role in bringing the unauthorised encampment to an end but we do provide advice to private landowners as required.

“We expect that Homebase will take the same approach and move to evict these trespassers very quickly but we have not heard from them as yet what their plans are.

“We are due to start enforcing the PSPOs in April.”

The PSPOs cover anti-social activities in the areas including people living in vehicles and tents, driving on the grass, defecating, lighting fires and fly-tipping.

Where they apply, the PSPOs impose prohibitions on:

On request by an authorised officer, police officer or PCSO, anyone challenged needs to:

Breaching a Public Space Protection Order is a criminal offence.