A Hove church has been celebrating the work of a charity aimed at tackling poverty today (Sunday 2 April).

Christians Against Poverty (CAP) is an ecumenical charity dedicated to tackling the root causes of poverty across the UK. They have a vision of a fairer society with a narrower gap between rich and poor.

Holland Road Baptist Church in Hove, celebrated the work of CAP Brighton and Hove today which is national “church action on poverty” day.

CAP helps 21,500 every year with debt by untangling the complex web of poverty, unemployment, debt and addiction which traps many people in Brighton and Hove and across the country.

While one in four people in wider society have a mental health problem, half of CAP’s clients say that mental ill-health has contributed to their hardship and 38 per cent have considered committing suicide as a way out.

Carol Topping and her husband got into trouble when her husband’s business failed and they started relying on benefits. They claimed council tax, housing benefit and income support without telling the council about their empty (uninhabitable) second home. The council classifies any property as an asset but because it was not rented out and was not providing them with any income, Mr and Mrs Topping did not realise that they needed to declare it. 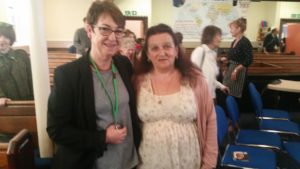 Mrs Topping, who now goes to Holland Road Baptist Church, said: “Two and a half years ago suddenly we had a debt of £68,000 plonked on us and were told to go to court. The debt is paid off now. My husband sold the property but it was hard. We had a barrister in the end and CAP was there.

“CAP was brilliant. It was just having someone there who didn’t judge you. It’s just so nice for people to look at you and see you as you.”

The Crown Prosecution Service referred the couple to the county court because the debt was such a large sum of money. Both the judge and barrister agreed that Mr and Mrs Topping had not intended to defraud the benefits system so the couple were awarded a six-month suspended sentence which will be spent in two years if they do not offend again.

For more information about Christians Against Poverty, click here.