A third Labour councillor pitches to be Brighton Kemptown candidate

A third Labour councillor has put himself forward to be the party’s candidate in Brighton Kemptown at the general election on Thursday 8 June.

Councillor Tom Bewick said today (Friday 21 April): “I believe I am the best candidate to take on Simon Kirby, providing a credible Labour message about the need to halt the decline of our local public services and invest in our communities.”

Councillor Bewick, who represents Westbourne Ward on Brighton and Hove City Council, said: “In May 2015, I was the only Labour member of the city council to win a traditionally Tory seat in Hove, demonstrating my moderate appeal to residents beyond tribal politics.”

He faces a challenge in Kemptown from two fellow members of the council – Dan Yates and Lloyd Russell-Moyle – among others.

Councillor Bewick said: “The Tories want to make this election about Brexit. I will campaign hard to expose their failed economic and social policies that led to Brexit in the first place – stagnating incomes, the crisis in our National Health Service, generation rent and young people unable to get on the housing ladder (and) our local schools that are so strapped for cash they are regularly seeking handouts from parents to pay for necessities.

“And on Brexit, while it is the case that the city voted overwhelmingly for Remain last June, the same cannot be said about large parts of the constituency.

“I spent a lot of time in the east of Brighton, Peacehaven, Rottingdean and Telscombe last summer. A clear majority were for Leave. I also campaigned for a Leave vote.

“But my record on this subject shows that my stance on leaving the EU is in the finest traditions of the Labour Party.

“I’ve argued for the return of our law-making powers so we can invest in our young people and our economy without the hindrance of Brussels bureaucrats telling us what we can and can’t do.

“As a businessman and entrepreneur who works internationally, I see a brighter future for the country being able to strike its own trade deals.

“I’ve argued consistently for the rights of EU nationals and I believe even after Brexit the country should adopt a pragmatic, managed migration policy based on what our local economies need.

“The Tories want to use Brexit to reduce workers’ rights, slash environmental standards and privatise our public services.

“I believe that strong Labour representation in Parliament is the only way to secure the best deal in these negotiations with the EU, including tariff-free access to the single market.

“If I was elected to Parliament, I would be fighting for a more progressive vision of Brexit every step of the way.

“The fact is we are leaving the EU. My focus will be on making the best of it.

“First and foremost, I want to represent the people of Brighton Kemptown and Peacehaven as a hard-working constituency MP. 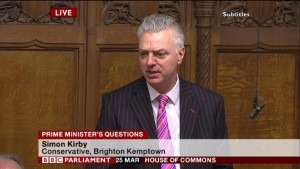 “The brutal truth is that Simon Kirby, as a minister in the government, has failed to bring any real focus or attention to the needs of local people.

“Instead of rolling his sleeves up, for example, over the pressing need to restore Madeira Arches, he went AWOL, allowing this important matter to descend into media cat-calling only after a failed bid.

“As a former lead member for children’s services, I wrote to him on several occasions about local and council issues and never even received the courtesy of a response.

“So if I’m the Labour Party candidate for this constituency, I will be explaining to the voters why they deserve a different kind of local representation from what has been delivered by Mr Kirby.

“It will be about standing up for and dealing with the daily concerns of ordinary people.

“It will be about working co-operatively with all political parties and community groups to get the investment we need in business regeneration and local public services.

“Above all, it will be about using my political and business background to improve the life chances and opportunities of every single person in the constituency.”