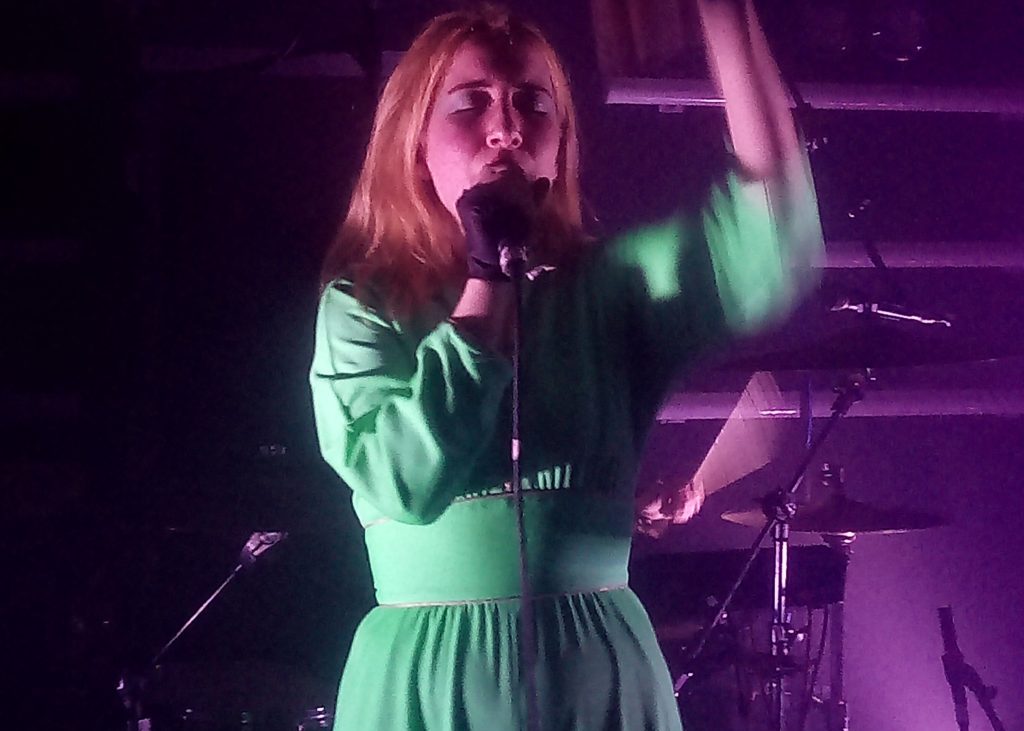 To be brutally honest, I have been aware of the Toronto based electronic music project known as Austra for a few years now and it wasn’t until their third and new album entitled Future Politics, which interestingly was solely produced by a team of women, that I have become totally hooked. I just didn’t quite warm to their 2011 Feel It Break and 2013 Olympia albums.

Then something just totally clicked with me with the sound and striking artwork (with photos taken at Mexican modernist architect Luis Barragan San Cristobal Stables residence) of the 2017 platter. I bought the album straight away and played it seven times in a row! I really don’t do that kind of thing, and yet somehow I had.

The face of Austra is a girl named Katie Stelmanis. The name Austra refers to Katie’s middle name and is intriguingly also apparently the name of the goddess of light in Latvian mythology.

I had thought that prior to seeing her perform at Patterns that she was in fact a solo artist, but live and on record she is joined on drums by her friend Maya Postepski, who I have to thank for producing and co-writing the awesome TR/ST debut album with fellow Canadian Robert Alfons, although it was eclipsed by the 2014 Joyland album. Complimenting the line-up is Ryan Wonsiak on keyboards and Dorian Wolf on bass.

Katie’s voice is so ethereal and hypnotic, that I suspect that she must be classically trained. If you haven’t heard her voice before, then just think of Florence Welch from Florence & The Machine and you won’t be far wrong. It’s rather captivating live as she shuts her eyes a majority of the time whilst singing as though the sounds are directly emanating from the heart, if you catch my drift. You know like Bjork or Elizabeth Fraser of the Cocteau Twins.

Tonight, Austra skilfully performed no less than 17 enchanting synth-pop songs, with the first eight of eleven tracks on the current Future Politics album, with the opening four compositions mirroring the start of the album, namely We Were Alive, Future Politics, Utopia, and I’m A Monster. The remaining quartet being Angel In Your Eye, Freepower, Gaia and in my opinion the evenings second best track I Love You More Than You Love Yourself.

We heard the title track from the 2014 Habitat EP and then Lose It (the best track of the night – it’s very catchy), Beat And The Pulse, The Choke, and The Villain from the debut Feel It Break disc and from the Olympia album we were treated to renditions of Forgive Me, Painful Like, Home, and the finale was Hurt Me Now.

This was definitely one of those gigs where it turned out much better than I thought it was going to be. Right, I have seen the error of my ways and so I’m off to buy the other CD’s now. Ciao!