The boss of a Brighton HIV charity has thanked the thousands of supporters who rallied to “Save the Sussex Beacon”.

Chief executive Simon Dowe said: “I feel like we’ve taken a real step forward in our campaign to save the charity.

“It’s overwhelming,” he said but he added: “There is still a lot of work to do.”

The campaign to save the Sussex Beacon is still going strong, Mr Dowe said, with things looking more positive for the charity after a huge groundswell of community support.

Funding cuts had put services at risk but local support, grants from non-statutory funding bodies and a restructure have put the charity in a better financial position.

While there is still a way to go in the campaign to save the charity, the majority of staff have been told that their jobs are no longer at risk of redundancy.

And the charity is currently able to continue offering services to people living with HIV across Sussex.

Local support for the campaign has been incredible, he said. with over 10,600 people signing a petition to “Save the Sussex Beacon”. MPs, local people and colleagues in the health and HIV sectors have also given their backing. 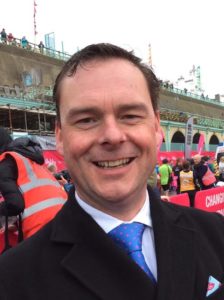 In addition, the Sussex Beacon is in talks with national HIV charity, Terrence Higgins Trust (THT), about working together and sharing resources in future.

The talks are at an early stage and are exploring the possibility of THT providing back office resources, such as finance and IT functions.

Mr Dowe said: “I feel like we’ve taken a real step forward in our campaign to save the charity.

“There is still a lot of work to do over the coming months to make the Sussex Beacon more sustainable and less reliant on statutory funding.

“But I’m delighted we have the opportunity to continue supporting local people living with HIV right now.

“I can’t thank everyone enough for their support during this really difficult time, from service users and volunteers, to fundraisers and local MPs.

“Finally, the staff have been incredible, both dedicated and professional despite their jobs being at risk.

“We’ve all been moved by the support we’ve had and it’s made us more determined than ever to secure a future for the Sussex Beacon.”

Services were under threat as changes to local NHS commissioning arrangements led to a reduction in statutory funding.

Charity management and trustees will continue to make every effort to put the organisation in a stronger financial position.

The Sussex Beacon provides specialist support and care for people living with HIV through both inpatient and outpatient services.

It helps hundreds of people living with HIV in Sussex each year and was rated outstanding by the Care Quality Commission in September.