A former acting head of Hove Park School has been confirmed as the head teacher of Peacehaven Community School.

Austen Hindman has overseen improved results since taking over as the acting head at Peacehaven which had fallen below the government’s baseline target for GCSE results.

As a result of the poor performance Swale Academies Trust was asked to provide support to the school.

Last week the trust became the school’s sponsor as it undergoes conversion to an academy.

“He has a very strong staff who are all committed to giving students the best possible experience of education.

“In under a year, the new leadership have increased the number of students achieving good passes in English and maths by 16 per cent.

“All students have benefited, with overall progress putting the school in the top 25 per cent of schools nationally.”

Swale was asked to support improvement in the school after the 2015 GCSE results which saw the school drop below the government’s baseline target.

At the same time, an interim executive board was appointed to take over the governance of the school. The interim board will stay in place until the conversion to an academy is complete. 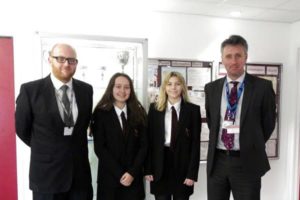