They enjoyed bright and dry weather for most of the day as they raised money for a variety of good causes walking the boundary of Brighton and Hove.

Mayor Pete West led the way – although he literally brought up the rear on the last leg as the final walkers made their way to Emmaus in Portslade.

One of the walkers, Emmaus chef Nikki Walthall, said as she completed the 18-mile walk: “My blisters have got sisters – but it was absolutely amazing.”

Emmaus boss Joel Lewis said: “It’s been great seeing everyone arriving including some familiar faces and some new faces. It’s got a great feel.” 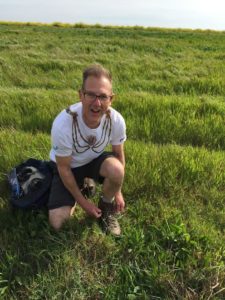 The event raised money for the mayor’s 27 charities, almost all of which were represented on the walk.

They mayor said beforehand: “Supporters and friends of my chosen charities will join in creating a new walking route. It will take in some of the highlights of our lovely local downland.

“Starting in Saltdean, there are six clear stages, including one with disabled access. You can join or leave at different points.

“The full route is just over 27 kilometres (18 miles) – one kilometre for every mayor’s charity.”

The walk took place a week after the Mayor’s charity bike ride round the biosphere with about a hundred supporters. 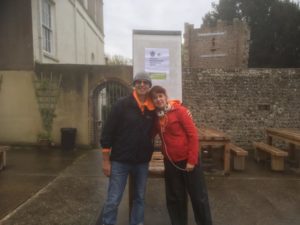 Despite one or two wrong turns – and feedback about signposting – a steady stream of fundraisers praised the event as they were fed and watered by volunteers at Emmaus at the finish.

One said: “It’s been a wonderful day and we’ve all raised money for various good causes close to our hearts.”

Brighton TV presenter chosen to run for Parliament for Labour