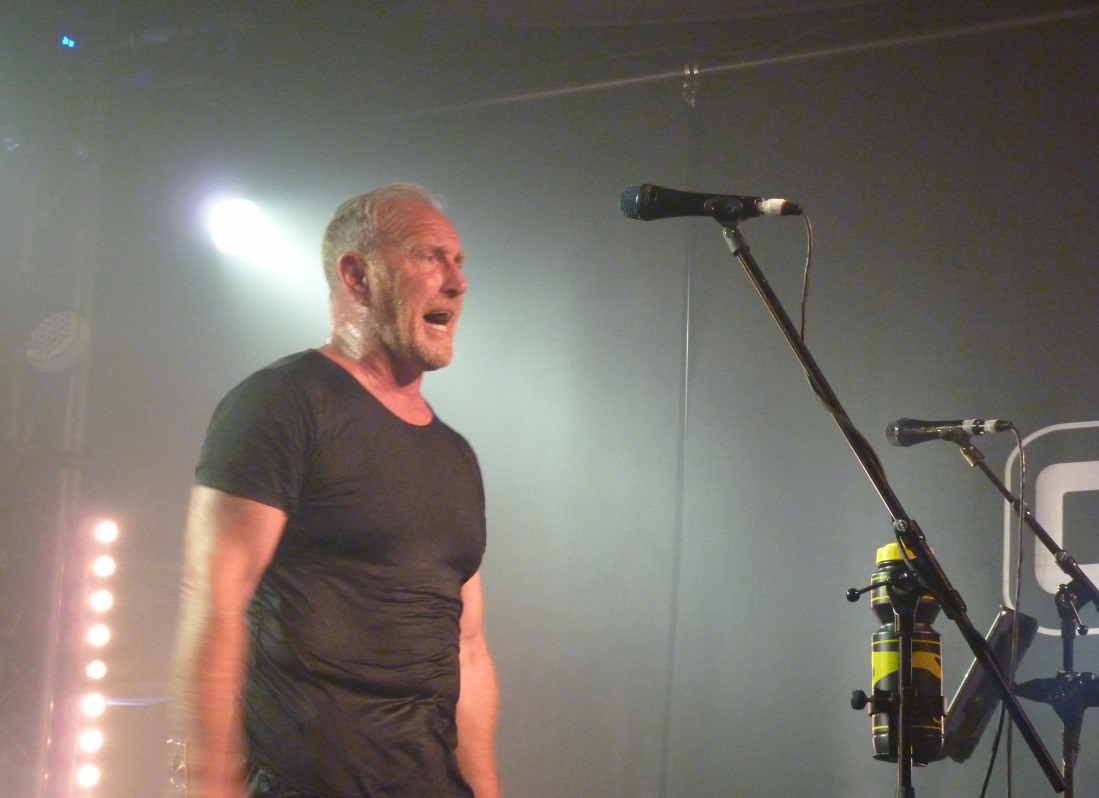 Richard Jobson, singer of The Skids at Brighton’s Concorde 2

The Skids who originally formed in their home town of Dunfermline in Scotland by Richard Jobson, Stuart Adamson, Bill Simpson and Tom Kellichan, are embarking on a 30 date 40th Anniversary Tour and the sixteenth venue is at the Concorde 2 on Brighton seafront.

They did play Brighton back in their hey-day and both visits were to the Top Rank Suite (which opened on 10th November 1965 and was located at the bottom of West Street), those dates being 31st October 1979 and 15th October 1980. I can remember seeing them there, but alas I cannot remember if it was one or both gigs.

The Top Rank was a mainstay for decent bands back in the day. It seemed that I was always there at least once a week. Whether it was to see the legendary riot Buzzcocks gig or The Clash, The Ramones, The Damned, Public Image Limited, Bauhaus, Simple Minds, Depeche Mode, Classix Nouveau, The Sisters of Mercy, Pigbag, Ultravox, Killing Joke, The Cure, The Undertones, Theatre of Hate, The Pretenders (who were incidentally supported by UB40) or some band called U2, who you might have heard of. It was a fantastic venue and sadly missed by tons of people. The only gripe I guess was that they used to quite often tear the tickets in half and so leaving you with just half a souvenir. 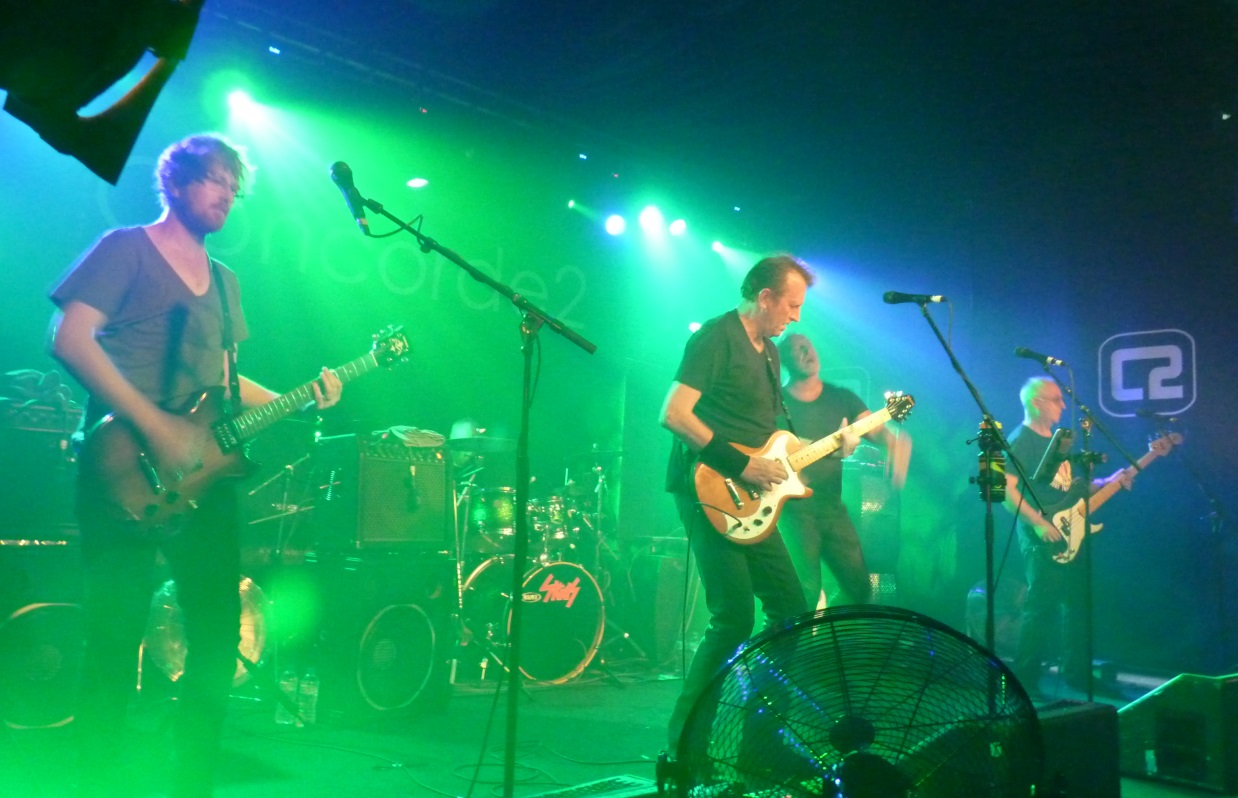 The Skids weren’t your archetypal 1-2-3-4 punk band, they were different. I can recall people at the time saying that all singer Richard Jobson ever writes songs about is war and their second album Days In Europa had a front cover reminiscent of the Berlin Olympics in 1936. The album had keyboards on it too, courtesy of Bill Nelson (formally of Be-Bop Deluxe) and even the drummer was the Blitz Club boy Rusty Egan who had a synth background with Visage. I’ve met Rusty – nice chap!

So on to tonight’s gig and I have to say that what a lovely lady Jordan is – the punk one not the other one. I met her for the first time this evening and decided to talk music with her and her friend instead of watching the support band. She was really early days punk and today was sporting purple hair – go girl! There you go Jordan, no mention of The Beatles, Kiddies or Call – oh blast I just did.

Tonight’s concert was luckily the old Skids material that the mainly mature audience had paid to see, but alas tonight’s line-up would not feature the band’s original guitarist Stuart Adamson as he sadly passed away in 2001 when he was only 43 years old. After The Skids, Adamson went on to have even bigger success with Big Country. Tonight’s crowd gave a round of applause for Stuart, which was a nice touch. 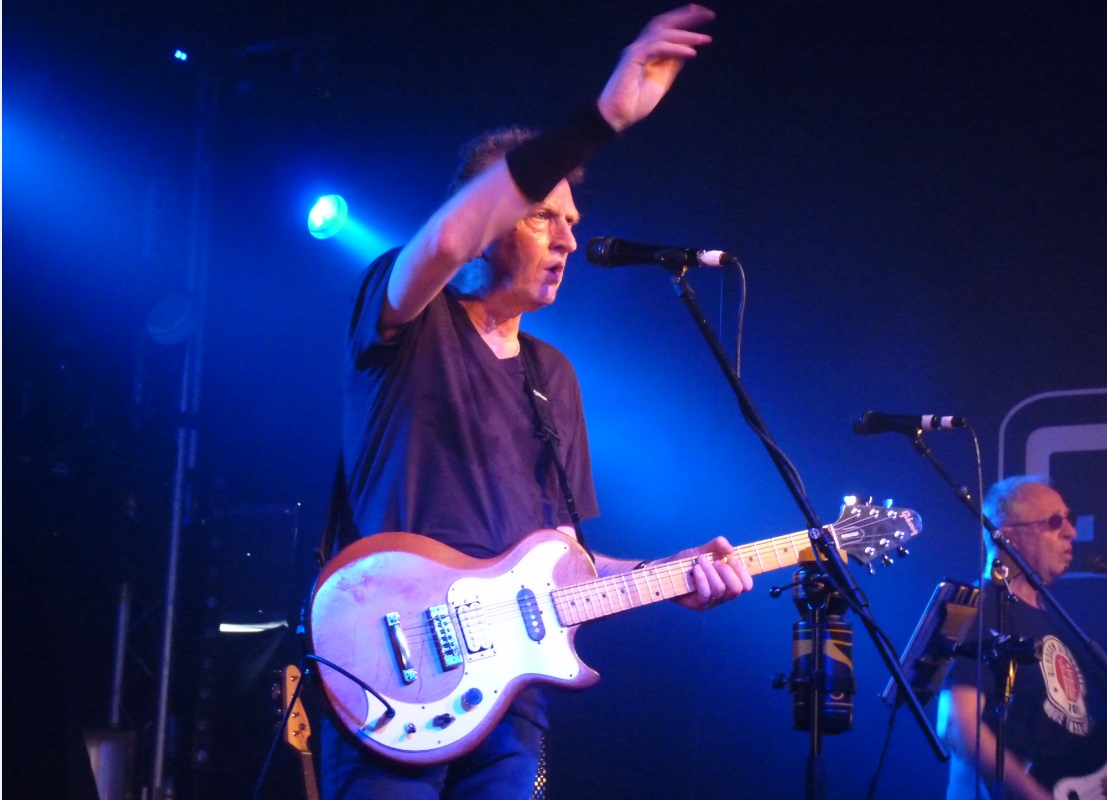 Bruce Watson (formally of Big County and now in The Skids)

There weren’t any keyboards that I could see or hear tonight, just five chaps – original members Richard Jobson and Bill Simpson being accompanied by Mike Baillie, Bruce Watson (who incidentally was in Big Country) and Jamie Watson – who were playing 18 rock songs.

They came on to their old intro song I can recall hearing back in the day and started with the opening track from the aforementioned Days In Europa album, namely Animation. Then one of the highlights of the set was up next and that was Of One Skin from their debut album, Scared To Dance. Melancholy Soldiers from the same album followed and then three tracks from the Days In Europa, the strangely titled Thanatos, then Dulce et Decorum Est (Pro Patria Mori) and finally the decent Working For The Yankee Dollar. I still sing this last track sometimes in my head, so I guess it had stood the test of time. The first ever Skids release I bought was up next and that was the 12” red vinyl single The Saints Are Coming. This went down rather well I thought. Scared To Dance, Charles and The Olympian were all given an outing. Then another highlight Out Of Town followed by the Gaelic sounding Hurry On Boys. A Woman In Winter and Circus Games came and went and then I really enjoyed Masquerade and the legendary Into The Valley. The final two songs were Charade and the comedy TV Stars (which I recall was written off of the back of people saying Jobson is always writing about war). 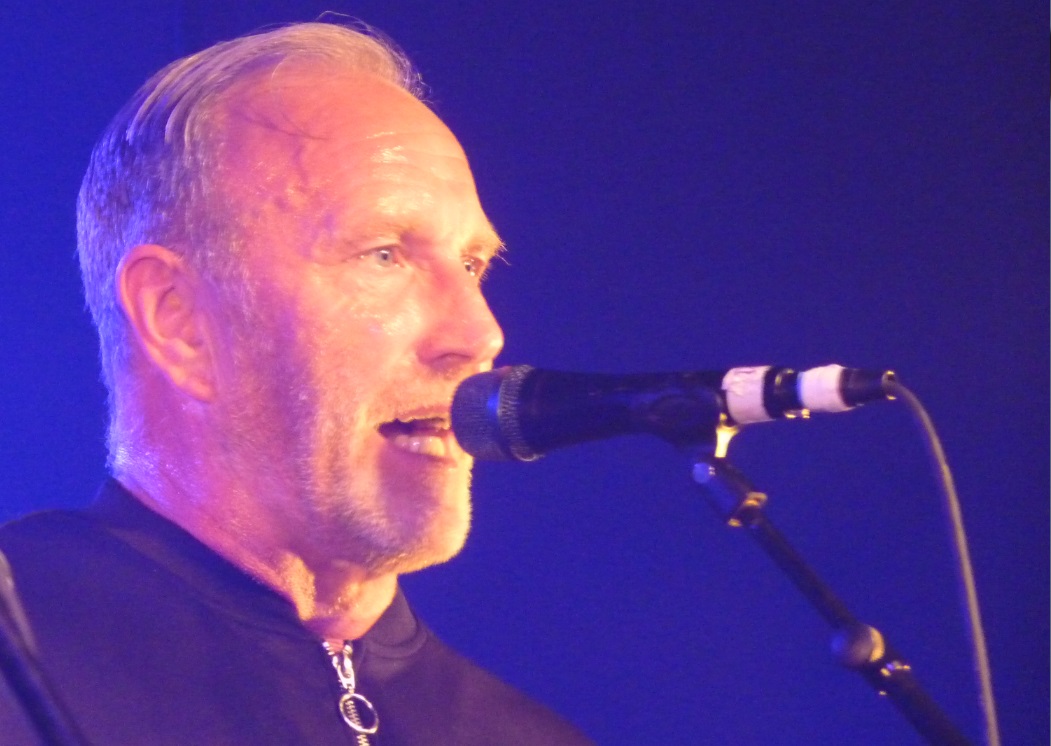 Richard Jobson at the Concorde 2

Talking of singer Jobson (who was awarded an honorary Doctor of Arts degree from Edinburgh Napier University four years ago), he surely must work out by kick-boxing or something as he looked very fit for 56 years old.

I think that tonight they played all the songs I wanted to hear, but it would have been quite interesting if they had also performed their Mull of Kintyre-esque 1981 single Iona too.

The gig was sadly all over by 9.50pm and on leaving the venue, the sky was pink and it was still 21 degrees – hottest day of the year I suspect.

The Skids will be releasing their first new album in 35 years titled Burning Cities and you can find out all about it on the bands Pledge page here: www.pledgemusic.com/projects/the-skids-burning-cities. 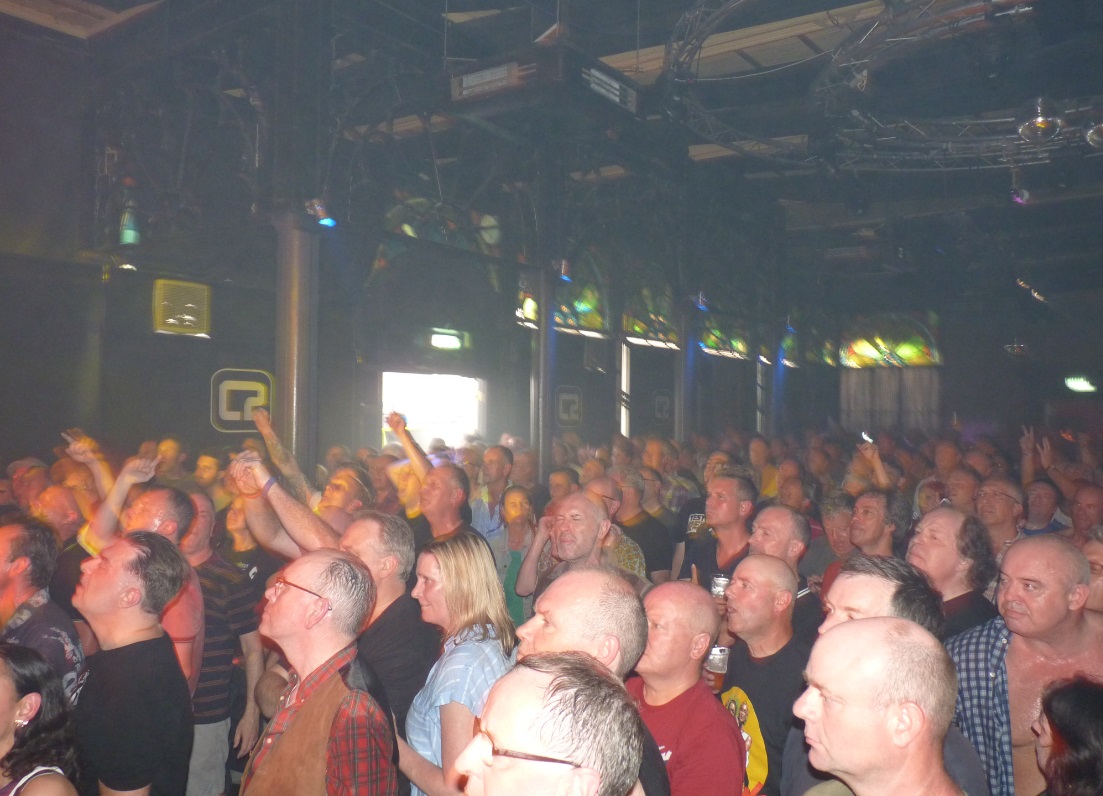 Tonight’s setlist reads: Animation, Of One Skin, Melancholy Soldiers, Thanatos (which is the Greek word for death), Dulce et Decorum Est (Pro Patria Mori) (which roughly translates as – It is a sweet and glorious thing (to die for one’s country)), Working For The Yankee Dollar, The Saints Are Coming, Scared To Dance, Charles, The Olympian, Out Of Town, Hurry On Boys, A Woman In Winter, Circus Games, Masquerade, Into The Valley, Charade, TV Stars.

For more information about The Skids go to: www.theskids.com 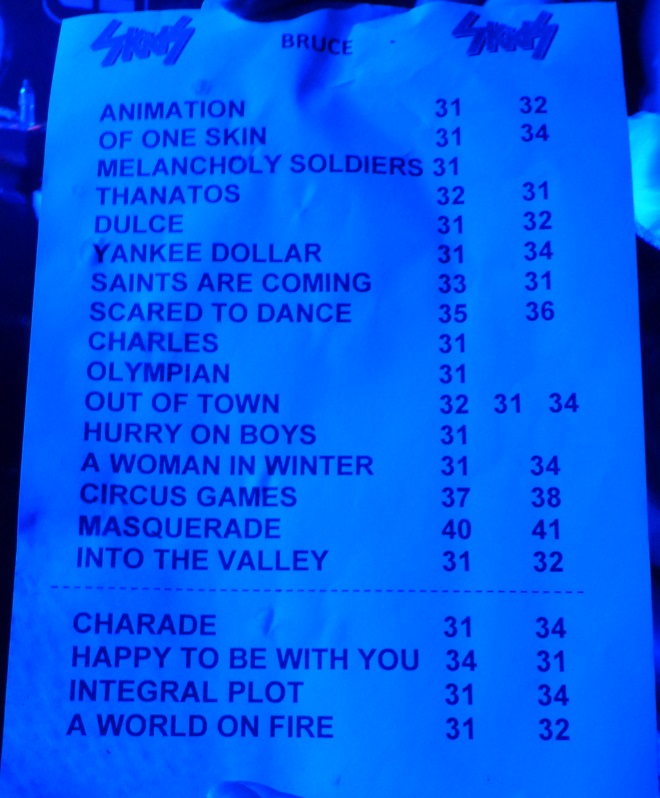 The proposed setlist for the gig – not sure what the numbers mean though? 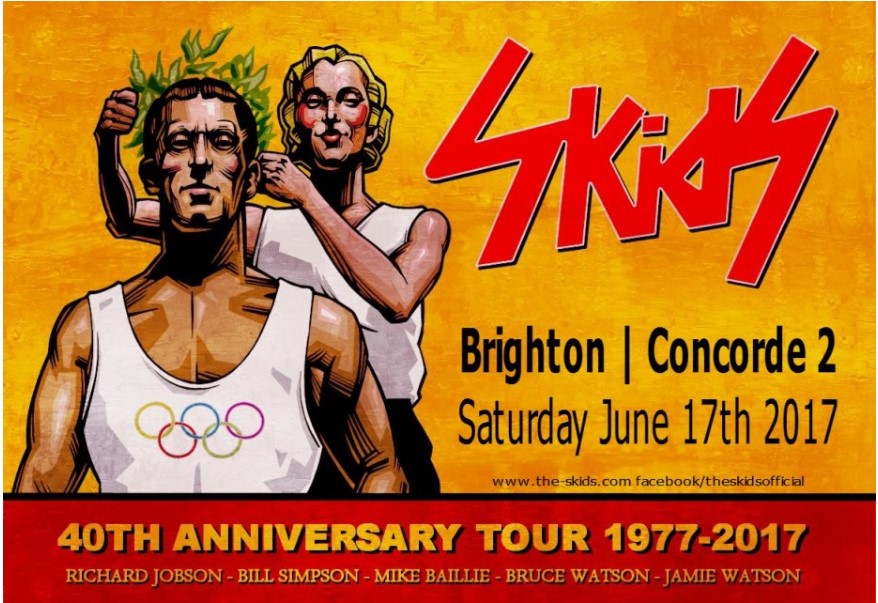