Children and young people are being offered easier and faster access to mental health help by a new NHS service.

The Brighton and Hove Community Wellbeing Service started earlier this month and was mentioned as councillors were given an update today (Monday 19 June) on recent changes and future developments.

A report to members of Brighton and Hove City Council said: “A period of huge change and improvement is about to begin.”

People will be able to refer themselves to the new Brighton and Hove Wellbeing Service or go through their family doctor – the more conventional route.

They may also be referred by their school. All secondary schools in the area now have a primary mental health worker and the scheme is being extended to primary schools.

A pilot scheme in a few schools – funded by the government – worked well. Children with problems were being helped earlier instead of having problems which worsened.

As well as being good for the children affected, it also proved more cost-effective and is consistent with recent reductions in children getting into trouble with the law.

The Brighton and Hove Wellbeing Service said that it “offers a range of support if you are experiencing emotional difficulties such as feeling anxious, low, or depressed”.

When the new service started, the Brighton and Hove Clinical Commissioning Group (CCG) said: “Children, young people, their families and professionals have told us that it has not always been easy to find out about children’s and young people’s mental health services or to access them when they need to and be seen and treated quickly.”

The new set up is aimed to tackle those problems. Councillor Caroline Penn, the lead member for mental health services, said after the meeting today: “Many parents have raised with me concerns about waiting times, access to services and the high threshold for services. 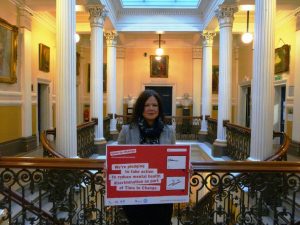 “The change of approach will hopefully make it easier for parents to access services through the all-age community service.

“We look forward to an update on progress next year.”

She also said: “I’m enormously proud that this is the first report of this type into children’s mental health coming to committee.”

Officials said that young people in Brighton and Hove were being encouraged to seek mental health help as soon as they need it with services becoming more user-friendly.

The report to councillors also noted: “Nationally, there is a great deal of focus on children’s mental health services, recognising this is an area where improvements need to be made.”

At Hove Town Hall this afternoon, the report presented to councillors said: “Improving the mental health and wellbeing of children and young people in Brighton and Hove is a Clinical Commissioning Group (CCG) and Brighton and Hove City Council priority.

“While there are fantastic services in pockets across the city, they are sometimes working in isolation and in a fragmented way, not necessarily together as a whole system.”

The changes aim to simplify the system, achieve better outcomes for those who need help, including by making sure they are seen and treated more quickly.

One long-serving councillor, retired school teacher Les Hamilton, praised the improved awareness in schools and said that there must have been children during his teaching career who had had mental health problems without his being aware of it.

The South Portslade councillor said: “Looking back, it makes me feel quite guilty.”

The changes taking place now could help today’s generation of teachers reach retirement without being able to say the same.