Labour leader Jeremy Corbyn emerged from a union conference in Brighton to a sea of cheering supporters this morning (Friday 23 June).

And to the crowd’s delight he gave an impromptu speech outside the Brighton Centre in which he said he was proud of his party’s election performance in Brighton Kemptown and Hove. 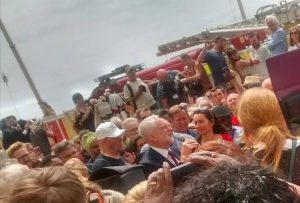 Jeremy Corbyn is mobbed in Brighton

Some of the 250-strong throng had been waiting on the seafront for up to two hours hoping to glimpse the opposition leader.

Mr Corbyn had just finished speaking to the Unison annual conference where he said that Labour would scrap the public sector pay cap.

He spoke on the day that a YouGov poll for The Times newspaper suggested that for the first time more voters think that he would make a better prime minister than Theresa May.

Outside the Brighton Centre he said: “In this election we offered hope. I’m proud of the votes we gained and the constituencies we gained.”

He thanked Labour activists and praised the “brilliant Lloyd Russell-Moyle” who won Brighton Kemptown from the Conservatives at the general election. And he was delighted with the way that Peter Kyle had turned a marginal Hove seat into one with a majority of almost 19,000.

Mr Corbyn said to his seafront supporters: “It’s time to call time on austerity and the cuts on public services.

And he thanked his “friends in Unison working in the public services” while issuing a plea for unity in the face of “so many awful events recently”.

He said that in the face of the terrorist attacks in Manchester, London Bridge and his own constituency of Islington North “the only answer is bringing communities together and having properly funded public services to make sure we are all protected”.

He said: “When we come together as people in society and in communities there is nothing we can’t do.

“What humans intrinsically are is collective … Humans naturally help. Can’t we translate that a bit further and have a collective approach to the way we govern our country?” 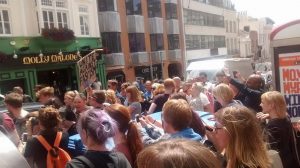 To cheers, Mr Corbyn said: “I want to live in a society that genuinely cares for all.”

He spoke about the Grenfell Tower fire, saying: “None – absolutely none – of those people should have died. There should have been a safety system in place.

“Surely this might just be a turning point in our public consciousness about the degree of inequality in our society.” 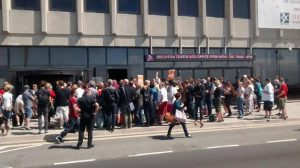 On housing, Mr Corbyn reiterated his belief that government policy needs to change: “I don’t want to live in food bank Britain, in homeless Britain. I want to live in a Britain where we are proud to house everyone.

“I want to see change in government policy where we start to put money into housing rather than take it out.

“Yes, the future does belong to you, but I want that future (to be one in which) you achieve more than us and have better standards than us so that every generation does better than the last. 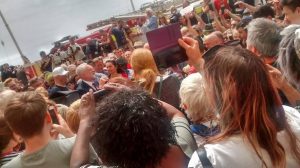 And he criticised work capability assessment tests by the Department for Work and Pensions, saying: “Most people deemed fit for work are not – and sadly some have even been driven to suicide. I want to live in a society that genuinely cares for all.”

Mr Corbyn ended his speech calling for “hope not fear, unity not division” and saying: “I am very happy to face another election tomorrow.”

The Labour leader left the Brighton Centre by car but his supporters crowded into the traffic in West Street to cheer and eventually wave him on his way.