Sixty homes approved for farmland on edge of Brighton

A scheme to build 60 homes on farmland on the edge of Brighton has been given outline planning permission this afternoon (Wednesday 13 September).

The proposal involves the demolition of existing farm buildings on nine acres of land at Coombe Farm, in Westfield Avenue North, Saltdean.

Forty per cent of the homes – or 24 of them – will be classed as affordable. And the applicants, Mike and David Carr, have been asked to make a financial contribution to the council totalling more than £500,000.

The developer contribution will be go towards local schools, a children’s play area, public transport and improvements for pedestrians.

She said: “My understanding from the bus company is that they will not be sending buses into the site meaning residents will have a long walk to access buses and children needing to travel outside the area for school.”

She flagged up traffic congestion on the A259 coast road “and the impact of pollution levels in Rottingdean High Street” as well as wildlife concerns, relating to bats and badgers.

Councillor Mears said: “We also have the serious issue of a doctors’ surgery closing in the surrounding areas and pressure for residents from Woodingdean, Rottingdean and Saltdean to be able to register at available doctors’ surgeries now.

“The surrounding infrastructure is unable to cope.”

She said: “We understand that both roads and communal areas are to be unadopted. Such roads in East Saltdean have fallen into disrepair. How would the council prevent similar dilapidation?

“Pressure upon local schools and GP places is critical. 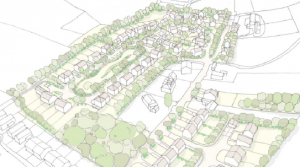 “Lack of local infrastructure will cause a significant increase in daily traffic, exacerbating the chronic congestion on the coast road and illegal nitrogen dioxide levels in Rottingdean High Street which already break EU regulations daily.”

Planning consultant Paul Burgess, of Lewis and Co, spoke for the applicants and said: “The land is no longer required for farming and it is not in the national park.”

The housing density at 16 buildings per hectare would be lower than the surrounding area – and tall and ugly agricultural buildings would be replaced with two-storey family homes.

And he reminded councillors that 40 per cent of the homes would be affordable, with almost half of those for rent, in line with council policy.

He highlighted the financial contribution to be made by the developer and added: “The scheme before you today will make a vital contribution towards the housing requirements of Saltdean and the wider city.”

Councillor Michael Inkpin-Leissner said that there were already buildings and concrete on the land and added that it was suitable for housing.

Councillor Adrian Morris said: “It’s on the urban fringe but it is a brownfield site.”

Councillor Joe Miller said that he had concerns about the impact on neighbouring greenfield sites.

Councillor Leo Littman spoke about local roads being congested and the balance to be struck between the need for housing and the pressure on the local infrastructure.

Councillor Lynda Hyde said that she had “serious concerns” about the extra traffic, the pressure on local schools and on GP places.

Councillor Dan Yates said: “I remember this site when it was a working farm … It’s (now) being used for a wide variety of different things.

“It’s a sensible proposal which seems to address the majority of the issues.”

He had concerns about the proposed roads being unadopted, given the track record with other unadopted roads in the area.

The outline plans were approved by nine votes to two.