When Brighton charity chief Ben Glazebrook set out to raise funds for Impact Initiatives, he didn’t truly appreciate the scale of what lay ahead.

Mr Glazebrook, 42, who runs the Young People’s Centre – an Impact Initiatives project – in Ship Street, Brighton, said: “The ride ended up being a bit more of a challenge than planned.” 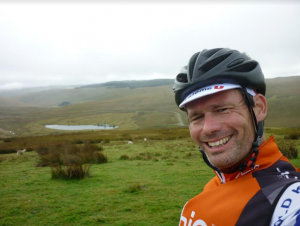 He took part in a 390-mile coast to coast cycling challenge to celebrate Impact’s 39th anniversary.

The eight-day ride involved pedalling from St Justinians, near St Davids, in Wales, to Lowestoft, Suffolk, the most easterly point of the British Isles.

Mr Glazebrook said: “The weather ensured that we were really tested on more than one occasion.”

He faced torrential downpours, flooded roads and thunderstorms along the way – and some other ups and downs.

He said: “We climbed so many hills that it was the equivalent of going up Ditchling Beacon 37 times.

“There are no flat roads in Wales! Thankfully, cycling in Brighton has been perfect practice.”

The money that he raises with his “Funding Cycle” to mark “39 years of Impact” will help support the charity’s various projects in Brighton and Hove.

They include WASP, the Whitehawk After School Club and Summer Play Scheme, the Hop 50+ providing activities and social opportunities for people aged over 50, Stopover for young women who are homeless or at risk of homelessness and need a safe place to live, the Young People’s Centre, and the Larches Café, a community space and café in Coldean.