Sussex Police and a Brighton environmental group have objected to a £300 million scheme to build hundreds of homes and student housing at Preston Barracks.

Sussex police and crime commissioner Katy Bourne said that the force wanted a financial contribution from the developer totalling £217,000.

This would pay for facilities at John Street police station to enable extra officers to handle the extra work likely to result from more than 2,000 extra people living in the area.

The money would include police vehicles and start up costs – including new radios, IT equipment and body-worn cameras.

The developers, Cathedral and Brighton University, are already being asked for financial contributions totalling almost £2.5 million.

Brighton and Hove Friends of the Earth said that it broadly welcomed the regeneration of the Preston Barracks site but had concerns about parking and extra traffic.

The scheme proposes 800 parking spaces, an increase of 179 on current capacity, which would add to the existing problems in Lewes Road and around the Vogue Gyratory, the campaign group said.

Chris Todd, from Brighton and Hove Friends of the Earth, said in a letter to planners that the group was “objecting to the 28 per cent rise in car parking which will increase traffic, congestion and air pollution”.

Mr Todd said: “The development risks delaying compliance of nearby roads with the legal limits for nitrogen dioxide and could therefore be illegal.

“It will also slow down buses, making them less reliable, leading to increased costs and potentially higher fares.

“However, were councillors to demand a reduction in car parking on site, they could actually reduce congestion and pollution in the city.

“BHFOE is also objecting to the lack of improvements for disabled users to Moulsecoomb Station where one (westbound) platform is only accessible via steep flights of stairs.” 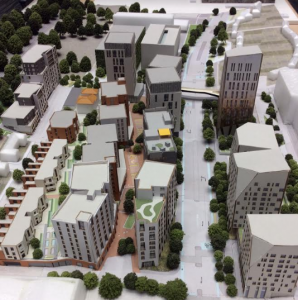 Mr Todd added: “We know the impacts that congestion and air pollution have on people and we know the solutions.

“Yet all too often when it comes to the crunch, there is special pleading and the situation is allowed to get worse. This is what we see at Preston Barracks.

“The increase in traffic and congestion arising from the development is directly attributable to the 28 per cent increase in car parking on the site.

“This is going to expose residents to higher levels of pollution for longer. This is not acceptable.

“Nitrogen dioxide levels should have been below the legal limits nearly eight years ago.

“In that time thousands of people have suffered and will continue to suffer if these proposals go ahead unamended.

“Reducing the car parking on site would save the developers money which could then be used to make Moulsecoomb Station fully accessible.

“We can’t understand how the developers have got away with not improving this important gateway to the site.”

The planning application – to build more than 300 homes, more than 1,300 student flats and new university buildings – is being discussed by the council’s Planning Committee at Hove Town Hall this afternoon (Wednesday 27 September).

Councillors are being advised to agree the plans, including a new bridge over Lewes Road, subject to conditions.