The restoration of a windmill in Hove has won a heritage award.

The award, a commemorative plaque, was attached to the grade II* listed structure, at a ceremony last week.

Brighton and Hove City Council said: “A restoration project which has seen West Blatchington Windmill repaired and returned to its former glory has received a prestigious Heritage Award.

“The windmill has been awarded the 2017 Public and Community Award from the Sussex Heritage Trust.

“The announcement follows a £100,000 restoration – a joint project by Brighton and Hove City Council’s Property and Design Team, Fowler Building Contractors, Baqus Construction and Property Consultancy and CTP (Consulting Engineers), in consultation with the Friends of West Blatchington Windmill which contributed half of the funding.”

Long-serving chairman of the Friends, Peter Hill, said: “Thanks to the exemplary quality of workmanship we now have a mill which, excluding a repeat of the hurricane of 1987, will survive the vagrancies of our weather for many years to come.” 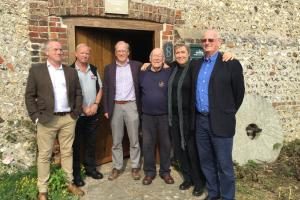 The judges said: “The mill is a fantastic heritage asset, a museum both of its own history and of windmills in general.

“The Friends of West Blatchington Windmill are to be commended for their effort, energy and enthusiasm in its preservation, without which it would almost certainly have been lost.

“It is hoped that Brighton and Hove City Council will lend its support in maintaining the grounds around the mill.”

Mr Hill said: “They spent an hour and a half with us and left in raptures on what they had seen.”

Peter Hill and the Friends also received a special commendation for the work that they have done to preserve the Windmill.

“Weatherboarding and flint walling were also repaired and the mill and barn repainted in a traditional colour to replicate the original tarring.

“Existing materials were reused where possible and work was carefully programmed to minimise disruption and ensure safe access for the general public attending classes in the attached barn.” 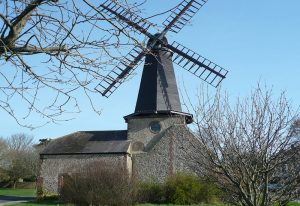 Councillor Gill Mitchell, who chairs the council’s Environment, Transport and Sustainability Committee, said: “West Blatchington Mill is a unique example of a traditional smock windmill so I am delighted that we have been able to work with the Friends group on this stunning restoration project and ensure this important city asset is preserved and enjoyed by generations of residents.”

The mill, which was painted by John Constable in a watercolour in 1825, is open to the public on Sundays and bank holiday afternoons from May to September, with school parties and other groups shown round at other times by appointment.

Constable’s painting is on view as part of an exhibition of his work at Brighton Museum until Sunday (8 October).

Another windmill is up for sale. Patcham Mill, sometimes referred to as Westdene Windmill or Waterhall Windmill, is on the market for £1.38 million. Now a three-bedroom home, the mill, in Mill Road, Brighton, was built in 1885. It was last sold for £975,000 in January 2014.

The Sussex Heritage Trust also named the i360 as an award winner in recognition of the way that it incorporated the Victorian-style toll booths in its design. The originals, designed by the West Pier architect Eugenius Birch, graced the entrance to the pier. It was not possible to restore them as planned so replicas were made and placed where the originals stood.

And the new Trinity Medical Centre and Pharmacy, in Goldstone Villas, Hove, picked up an award for the way the grade II building – formerly the Holy Trinity Church – was adapted. The architects were Deacon and Richardson, the developer was Medical Centre Developments and the work was carried out by Westridge Construction. Otter Project Management and structural engineers Ings Engineering were also credited.