It seems quite inconceivable that it has been 21 years since eclectic trip-hop duo Lamb released their debut eponymous album to much acclaim. To celebrate the anniversary of it’s release, they embarked on their ‘Twenty One’ tour taking in dates right across Europe and arrived in Brighton this evening on their first UK date. Tonight they lined up with a three piece supporting band playing drums, double bass and viola to accompany the electronic and vocal wizardry.

Lamb are music producer Andy Barlow and singer-songwriter Lou Rhodes. As Andy explained in the break between sets, they met when Andy answered the phone at the Manchester recording studio at which he worked on the day he had been dismissed and took a chance call from Lou. They got talking and arranged to meet to discuss musical ideas although Andy admits to an ulterior motive once they had met – he fancied her! They never did get it on personally but musically they are the perfect match. Lou Rhodes of Lamb at the Concorde 2

There is quite clearly great musical chemistry between them and their contrasting ideas and styles dovetail perfectly to form a wonderful fusion of trip-hop, drum & bass, electronica and dub, working in tandem with Lou’s incredible voice to produce stunning outcomes.

This evening, the set was divided into 2 parts. The first was a performance of their self-titled first album in it’s entirety and in the correct running order. This included several tracks never performed live before.

They opened with a quite thumping version of ‘Lusty’ with deep drum & bass running through it contrasted with Lou’s dreamy vocals. The bar for the evening had clearly been set very high.

There was a six-minute plus version of their beautiful classic ‘Gorecki’ which as Lou explained would have been the encore, but they wanted to stay true to the album running order. This track, which has graced hundreds of ‘chill out’ albums sounds as stunning today as when it was first released. After an engaging anecdote on the band’s formation from Andy, the second part of the set ensued and was filled with highlights from the rest of their career.

This section opened with the stunning ‘Angelica’, sampling Debussy’s ‘Claire De Lune’ – who’d have thought electro beats could combine so beautifully with a classic masterpiece?

Other highlights of part two included crowd-pleasing ‘Little Things’ which had everyone dancing energetically with its dub infused beats contrasted against Lou’s brilliant vocal. Sensuous 2014 single ‘We Fall in Love’ has a galactic feel which builds through it’s duration and was a personal favourite from the night. ‘Ear Parcel’ (featuring Davey again) showcased a rip-roaring jazz trumpet-steeped electro-beat. Their current single release ‘Illumina’ had the crowd dancing to it’s dub electronica overtones. Lou Rhodes – fashion was very much the order of the day

The encore was reserved for the in-demand ‘Gabriel’, a swirling, dreamy track, centred around a Lou’s wonderfully distinctive vocal.

Without doubt this was one of the very best gigs I’ve attended this year. Andy, a Brighton resident delighted in performing in his home town, his infectious enthusiasm rubbing off on the audience. It’s great to see a band who enjoy themselves so much impart that vibe to the crowd.

Everyone came forward and took a bow at the end in a fitting finale to a brilliant set. They may not have enjoyed as much commercial success over those 21 years as they’d hoped, but their music has more than stood the test of time and endures to this day. 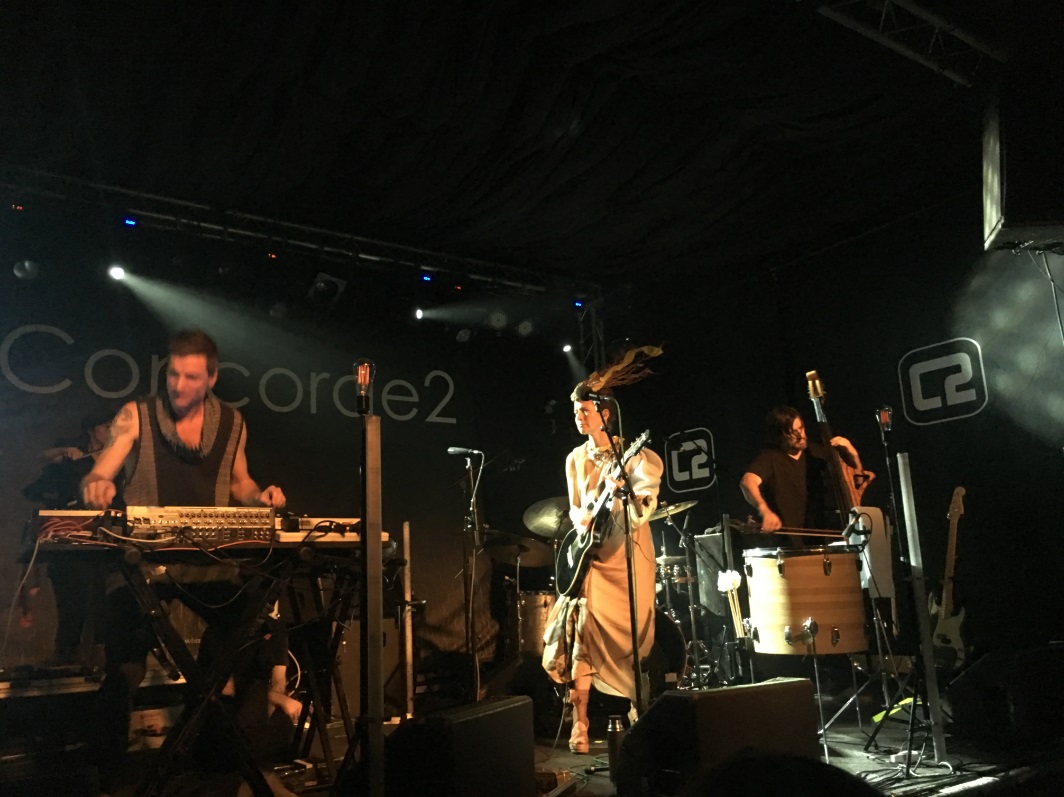 I for one hope they come back to Brighton again very soon.