Decision delayed on scheme to build four council houses in Brighton for £1.2m

A decision has been delayed on a scheme to build four council houses in the Hollingbury area of Brighton for £1.2 million.

The cost was criticised by members of Brighton and Hove City Council when they debated the proposal this evening (Wednesday 15 November).

In a meeting at Hove Town Hall the council’s Housing and New Homes Committee bought more time after trying to establish why the homes should be so expensive. 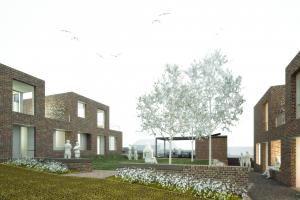 The plans will come back to the next meeting of the committee on Wednesday 17 January.

Before the meeting the council’s Labour leader Councillor Warren Morgan said: “Our new homes have more space than private developments, are built to keep fuel bills to a minimum and to accommodate people with disabilities or older people with long-term needs.

“This saves money for the tenants and the taxpayer.”

Private developers build at scale on easier sites, he said, which is cheaper.

Councillor Morgan added: “We will build decent homes for people on lower incomes.”

The financial details of the scheme were due to be discussed privately but former Conservative council leader Mary Mears said that it was tenants’ money and should be discussed openly.

The committee was told that similar schemes previously already had a contractor in place so there was no commercial sensitivity.

But this time the council would be inviting bids for the work and had concerns that sharing financial details might reduce its chances of obtaining best value from the process.

The Conservatives and Greens voted to debate the cost of the scheme in open session, with Councillor Steve Bell, a Conservative, highlighting possible cost savings.

Councillor Bell said that the site should be called Rothschild’s Crescent rather than Rotherfield Crescent.

He said: “To say I was shocked … to see what we are expected to vote on today is beyond an understatement.

“This is not about winning awards and this seems to be all that this Labour administration appears to be interested in.

“This should be about providing the best homes we can for residents on the housing waiting list.

“This design if it was to be for the private sector should be applauded but it is not. It is to be for affordable, living or social rents.

“It seems that no lessons have been learned and the message from this side of the committee to the Labour administration is being ignored at the expense of council taxpayers and tenants’ rents.

“This Labour administration seems to forget how to budget and just wants to continually spend taxpayers’ money for their own pats on the back and feel-good factor at the expenses of the lowly paid and vulnerable in this city.

“We will be told no doubt that value engineering has been used on this development.

“If this is the case, why are we using bonded gravel road and path surfaces which not only have an uplift of about 30 per cent over traditional tarmac but can only be repaired by a specialist at a higher expense?

“Why have we got brick walls? Because of the wind, in Woodingdean, which is the most exposed ward in the city, we have to replace either walls or closeboard fencing with chainlink fencing.

“Flat roofs? These only have a life span of 25 years so will need to be replaced 2.5 times within the 60-year cycle we have before us.

“Large glass panes? So because of solar gain these are going to be solar coated for protection against solar gain, again another vast increase in costs and maintenance and replacement and also totally unnecessary.

“Without being able to see the full specification it is very difficult to support this agenda item.

“We see that there is a communal BBQ and seating area which will be paid for out of HRA (Housing Revenue Account) so does this mean that this facility can be used by all tenants in our city who contribute to the HRA? Also this to be built out of brick.

“I hope this Labour administration is really proud of their efforts to pull the wool over the eyes of the residents.

“From the Conservatives on this committee, we will not let you do this to our city or residents.”