Anger over an influx of cars parking in and around Bear Road following the introduction of controlled parking in Hanover has resulted in slashed tyres – days after police wrote to residents asking them not to egg windscreens and leave abusive notes. 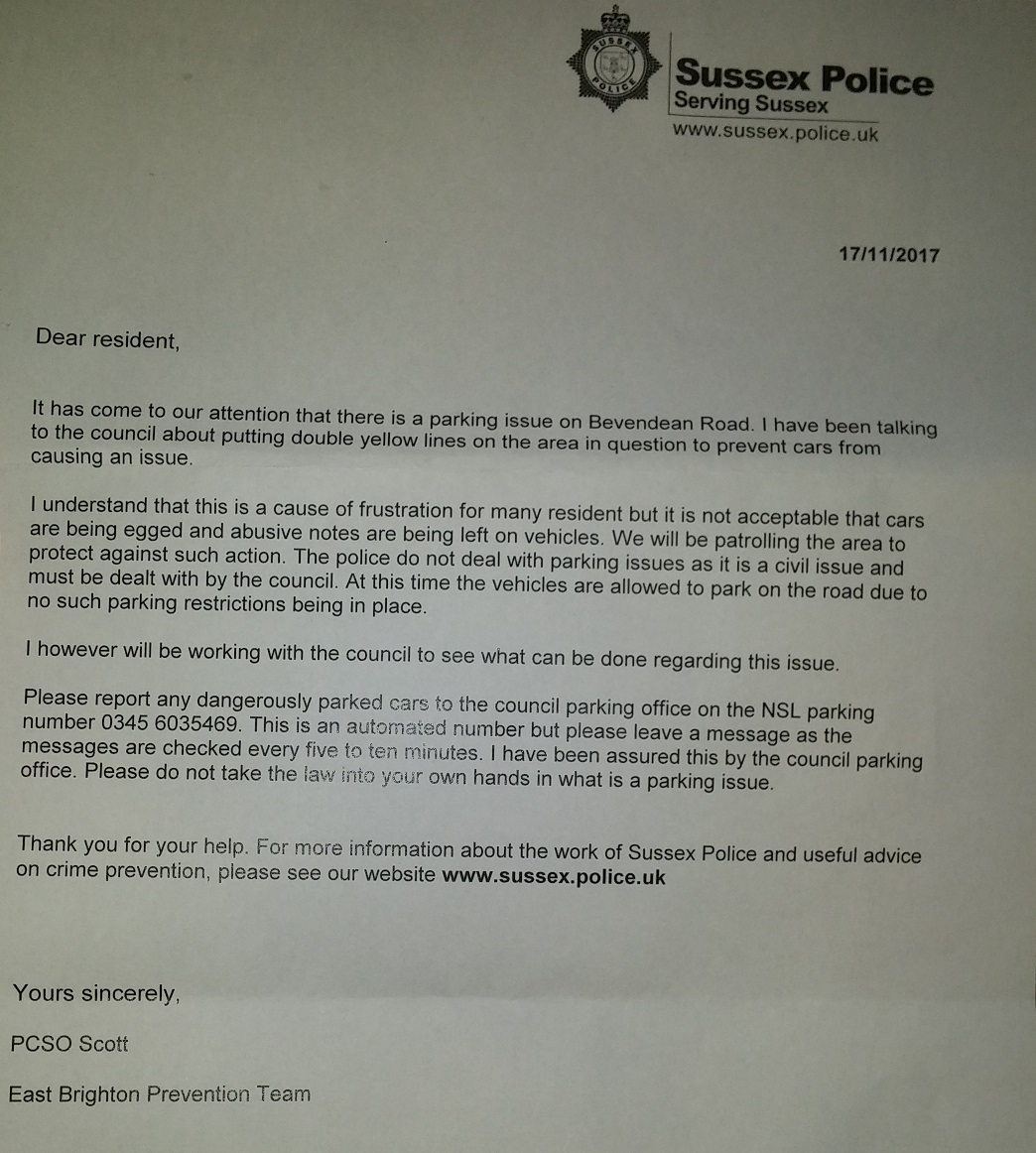 Residents have become increasingly frustrated at parking in the area, particularly in Bevendean Road, after cars and vans which used to park in Hanover and Elm Grove are now parking further out from the city centre.

As well as camper vans left on a long term basis, commuters have been spotted parking their cars in the area and taking bikes out of the boot to cycle to work.

The police letter, sent by PCSO Scott of the East Brighton Prevention Team on November 17, said: “I understand [bad parking] is a cause of frustration for many residents, but it is not acceptable that cars are being egged and abusive notes are being left on vehicles.

“We will be patrolling the area to protect against such action. The police do not deal with parking issues as it is a civil issue and must be dealt with by the council

“At this time, the vehicles are allowed to park on the road due to no such parking restrictions being in place.

“I however will be working with the council to see what can be done regarding this issue.

“Please do not take the law into your own hands in what is a parking issue.”

However, this did not stop people slashing the tyres of cars parked there overnight between Thursday and Friday last week.

Resident Maggie O’Callaghan said: “The cars on Bevendean road have only been parked there since CPZ introduction elsewhere.

“The road is two cars width, so parked cars on it obstruct cars turning on to it from Bear Road if someone is coming along Bevendean Road on the other side of the road.

“And cars parked at the top of the T junction between Coombe Road and Bevendean Road are now preventing cars from turning right onto Bevendean road unless no other traffic is coming – which you can’t see as multiple cars turn off from Bear Road onto Bevendean Road every two minutes.

“The cars that were parked so thoughtlessly have had notes put on them to ask drivers to move. The cars remained where they were. They were then egged. Still not moved. Now it seems they have been slashed.”

Meanwhile, more than 300 people have signed a petition started by Rebecca Barkaway on behalf of the Coombe Road Area Local Action Team calling for a consultation on controlled parking in response to residents’ “distress” at the influx of camper vans and caravans “dumped” outside their houses.

It says: “We the undersigned petition Brighton and Hove Council to undertake a Controlled Parking Zone consultation in the Coombe Road Area in order to implement parking restrictions that are resident-led and long-term resident-friendly.

“The consultation should include the areas bordering Bear Road and Southall Avenue up to The Avenue, Lewes Road and Bevendean Road.

“The consultation should recognise the different needs of residents who live at the bottom of the hill and those at the top of the hill and also the existing pressures of high number of HMOs in the area and that it is a densely populated community.

“Residents are interested in a combination of permit holders only bays in roads such as Riley Road and Dewe Road and light touch two-hour restrictions further up the hill.

“Residents are distressed at the influx of long-term large vehicles such as camper vans and caravans that are ‘dumped’ outside their houses.”