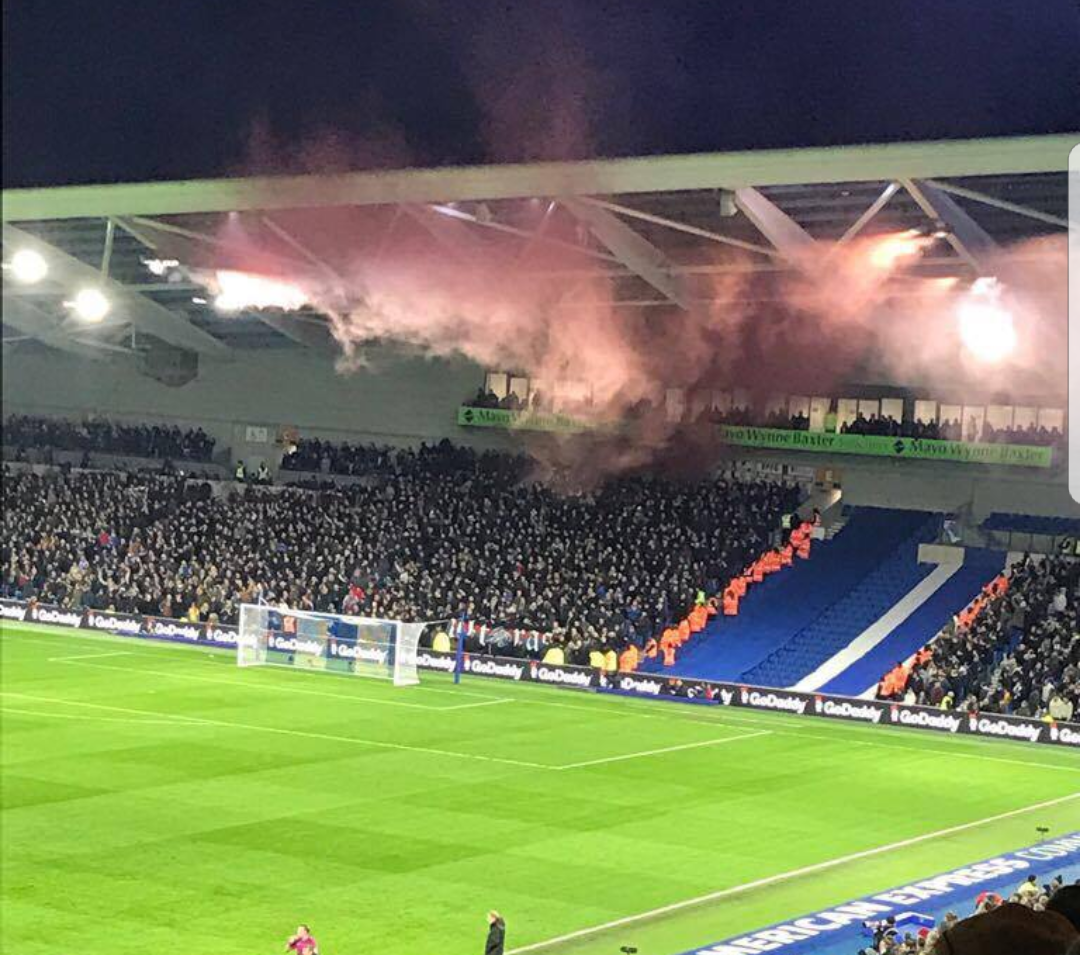 Others suffered minor injuries, according to Albion.

A number of people tried to force entry to the away supporters’ area – some without tickets – shortly after kick off at the American Express Community Stadium.

The club shut the gates. Some genuine ticket holders were among those who were turned away and escorted back to Brigton Station and on to a London-bound train.

Inside the ground flares and firecrackers appeared to be being set off by fans of the south London club.

Sussex Police football liaison officer PC Darren Balkham said on Twitter: “Many incidents tonight with what has been a the most challenging match I have known the day will which will be thoroughly reviewed with the clubs. Give us time to analyse, listen and get accounts from today.” (sic)

Brighton and Hove Albion issued a statement “after crowd disorder outside of the stadium during tonight’s match against Crystal Palace”.

The club said: “The vast majority of supporters who came to the match were a credit to both clubs – but sadly a minority came intent on causing disorder which left several stewards with minor injuries and one steward from each club hospitalised.

“A number of Crystal Palace fans travelled to the stadium without tickets, arriving after kick-off, some with the aim of forcing entry into the away end at 7.48pm – three minutes after the match kicked off.

“The club made the decision to close the turnstiles at 7.51pm – six minutes into the game – and with the support of Sussex Police we made the further decision to let no further supporters into the ground in the interest of public safety.

“A group of approximately 150 fans – some with tickets – were then escorted back to Falmer Station, and on to Brighton Station before being placed on a train back to London.”

“The disorder was caused by a minority of individuals who attempted to gain entry to the stadium without tickets.

“Thanks to the swift action of the club’s stewarding team, supported by Sussex Police, we avoided further, major disorder – and while some genuine fans were left extremely disappointed and unable to get into the stadium, the correct decisions were made.

“I’d like to thank the majority of fans of both clubs for their good behaviour and patience in complying with the instructions of our stewards and police.”

The club added: “Brighton and Hove Albion will be sharing CCTV images with Sussex Police, the Metropolitan Police and Crystal Palace to identify the individuals involved in the disorder.

“Genuine supporters, with tickets, who were unable to gain access to the stadium should contact Crystal Palace’s ticket office for further information regarding a refund.

“As this matter is now a Police investigation, the club will not be making any further comment at this stage.”

Football policing to be reviewed after ‘most challenging match’