A boundary-warping new show comes to the Dome for one night only this Friday.

From its opening scene on a deserted Hebridean beach surrounded by brooding cliffs, it takes the audience on a journey of car crashes, dreamscapes and soaring flight, with narration by BAFTA-nominated Oliver Dimsdale, live game playing by Thomas McMullan and, new for this performance, Robin Rimbaud (aka Scanner) leading on electronics to create a “beautiful and thought-provoking piece of work” (The Telegraph).

Laura Ducceschi, the producer of Dear Esther Live, said: “It’s been a huge realisation to me in understanding just how immersive this gaming technology can make an audiovisual project. 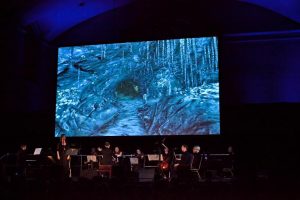 “From a sensory perspective it’s less about observing it to feeling that you are inside it.”

Jessica Curry, co-founder of The Chinese Room and composer of Dear Esther’s score, said: “One of the most exciting things about this tour is that no audience is going to get the same experience. The play through can change every night.”