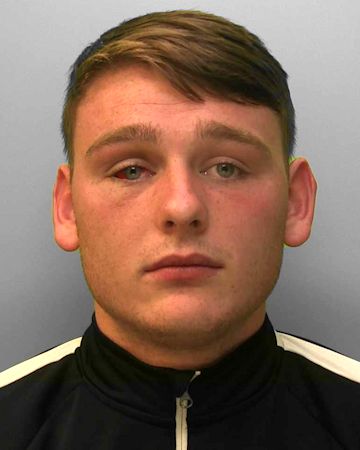 A wanted man who escaped from police while still in handcuffs has been jailed.

Shortly after 12.30pm on Friday 6 April, officers on patrol in Worthing approached Jesse Burbridge, who was sought in connection with an assault in Brighton.

The 22-year-old assaulted one of the officers and ran off, damaging a van and a fence in the process, however he was found hiding in a nearby shed shortly afterwards and was subsequently arrested.

He complained of arm pain and was taken to Worthing Hospital, where it was revealed he had a fractured arm. This was caused by his escape.

But despite this, he ran off again, while still handcuffed and before receiving treatment for his injury.

Police carried out an extensive search of the area, which included a dog unit and the National Police Air Service helicopter, but there was no trace of him.

He was last seen scaling a wall to the gasworks in Lyndhurst Road.

Officers searched several addresses linked to Burbridge over the following weeks, and he was eventually arrested in Lark Hill, Hangleton, on Saturday 9 June – again he had attempted to run off from police, but he was located hiding in a garden.

Burbridge, of Barnet Way, Hove, was charged with escaping from lawful custody, criminal damage and two counts of assault with intent to resist arrest.

He appeared at Lewes Crown Court on Monday (9 July), where he pleaded guilty to all four offences and was sentenced to a total of two years in jail.

During sentencing, the judge made reference to Burbridge’s appalling history of criminality.

Detective Inspector Simon Morgan said: “In interview, Burbridge claimed the reason he ran away from police on 6 April was because of issues relating to his daughter. However, he added that he would have done anything he could that day to evade capture.

“He knew he was wanted by police as we made numerous attempts to trace him, including a number of appeals on social media.

“Burbridge was clearly determined to avoid us, but we were determined to catch him and eventually, more than two months after he went on the run, he was arrested.”