Pressure is growing on major event organisers in Brighton and Hove to avoid single-use plastics and to cut down on litter.

They may even have to show how they will meet the growing demands to be greener if they are to gain permission to host events.

Councillors and campaigners hope to sway those running some of the biggest events, including the Brighton Marathon.

But Pride appears to have anticipated the trend for a sustainable approach, having recently set out its aim to switch to more environmentally-friendly supplies.

The current drive appears to stem from a push for Brighton and Hove City Council to sign up to the “Plastic Free Pledge” which it did last year.

The move followed a motion proposed by Conservative councillor Steve Bell to ban the purchase of single-use plastics in all council buildings and agencies. It won cross-party support.

Green councillor Phélim Mac Cafferty also won the backing of all parties when he called on the council to go further and press event organisers harder to reduce plastic use.

He said that the council should strengthen its sustainable event “commitment form” at a meeting of the council’s Policy, Resources and Growth Committee.

Councillor Mac Cafferty said:  “We have to think really hard in a way other cities do not have to because we are by the sea. We have to go that little bit further.”

He asked council officers to look at the possibility of organisers having to commit to avoid using single-use plastics before being given permission by the council to hold events.

So far this year key events across the city, including Pride, have committed to a drastic reduction in plastic use.

The Great Escape music festival used reusable and compostable alternatives to plastic and segregated its waste.

Cups at the event were made from starch. These take about 12 weeks to break down in landfill compared with up to 400 years for conventional plastic. 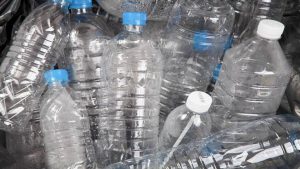 The Great Escape also banned plastic straws from all its bars and employed litter pickers during the event.

The Spiegeltent at the Brighton Fringe worked with the Brighton and Hove Sustainable Business Partnership to create a single-use plastics policy.

Plastic wine glasses were reused and no bottled water was sold on site.

Councillor Bell raised the issue of plastics at the Brighton Marathon when the matter came up most recently.

He said: “When the Brighton Marathon happened this year there was a lot of negative publicity about the use of single-use plastics.

“It’s something we need to address next year.”

In response, Nick Hibberd, the council’s executive director of economy, environment and culture, said: “Regarding the marathon, yes. Those conversations are taking place.

“For a big event such as the Brighton Marathon the pressure doesn’t just come from us at the council but also from the participants.

“They want to get involved with events with strong sustainability programmes.

“What we do want to ensure is that it doesn’t create a different waste stream with difficulties with recycling.

“We want to be quite clear with our policy and we want to work with event organisers rather than being dictatorial.”