Flasher with knife suspected of following three women in Brighton

A man is suspected of following three women in Brighton, telling one of them that he had a knife. 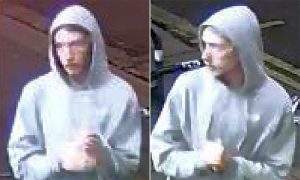 Sussex Police today issued security camera images of the man and asked for help identifying him.

The force said: “Detectives investigating reports of three women being followed within an hour in Brighton have released this CCTV image of a man they need to speak to.

“The first offence occurred at about 11.05pm on Thursday (9 August) in London Road when a 19-year-old woman noticed a man was following her.

“She challenged him and he mumbled something in reply. He then stated that he had a knife, although the victim did not see it.

“The victim ran into McDonald’s restaurant for help and the suspect ran off by St Peter’s Church.

“The second offence occurred around 10 minutes later when the 48-year-old victim was walking northwards in Richmond Parade.

“A man walking towards her mumbled something to her and then stood extremely close to her.

“When she backed away she saw he was indecently exposing himself. He then ran off.

”The third offence happened at around 12.05am on Friday (10 August) in Western Road as a 25-year-old woman was walking westwards past the Primark store.

“She noticed a man walking close behind her. She crossed the road to avoid him but he followed her.

“He then swore and threatened to stab her.

“She shouted for help and another man approached to assist her, which caused the suspect to run off.

“The suspect is white, aged between 18 and 25, slim with blond wavy messy hair.

“He was wearing a grey hooded top with a pocket on the front and a large logo on the back, black jeans and black trainers with white soles.”

Detective Constable Vicky Bailey said: “We are carrying out extensive inquiries to urgently trace this man but are appealing for the public’s help.

“We have not received any further similar reports of this happening but this was a frightening ordeal for the victims.

“We also need to trace witnesses to the incidents in Richmond Parade and Western Road as their presence led to the man fleeing the scene.

“If anyone has information which could help our investigation, please contact us.”

Sussex Police urged anyone with information to phone the force on 101 or to contact officers online, quoting serial 1392 of 09/08.