Dozens of people have written to support plans to add a second floor to a bungalow in The Park in Rottingdean.

But an official report to Brighton and Hove City Council Planning Committee recommends refusing the application.

Thirty-nine letters of support have been sent to the council, with only two letters of objection, which came from the neighbours living on either side.

They said that the remodelled building would be too bulky and close to the boundary.

One neighbour said: “The height and proximity of the side elevation against my boundary, together with the increased overlooking arising from full-height windows to the rear elevation, would be harmful to my property.”

Rottingdean Parish Council has also opposed the plans, saying that the building would be out of step with the area.

It would be too high, was poorly designed and would lead to the loss of amenity for neighbours, the parish council said.

But three other neighbours were among those to write letters of support, as were eight people living near by in Rottingdean.

A further 28 supporting comments come from people living in other parts of Brighton and Hove and the rest of Sussex, as well as four from other parts of the country.

The proposed design has an “art deco” feel, which is described as out of keeping by planning officers and direct neighbours but in keeping with the wider area by supporters.

She said: “I believe the proposed development is suitable for the site in terms of size and is in keeping with the surrounding area.

“If you stand on the green in The Park you can clearly see the mix of different properties, from family houses to bungalows with roof extensions.” 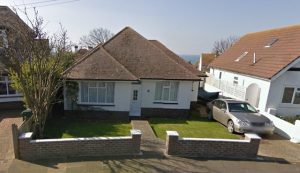 A previous application with a balcony was refused in April for being too bulky, out of keeping with the street and overbearing to neighbours.

A report on the latest proposal, by planning officer Sven Rufus, said that the new application was similar to the one refused earlier this year.

His report said that the proposed scheme was too close to neighbours and out of character with the street.

The council’s Planning Committee is due to discuss the plans at Hove Town Hall next Wednesday (7 November). The meeting starts at 2pm and is open to the public.