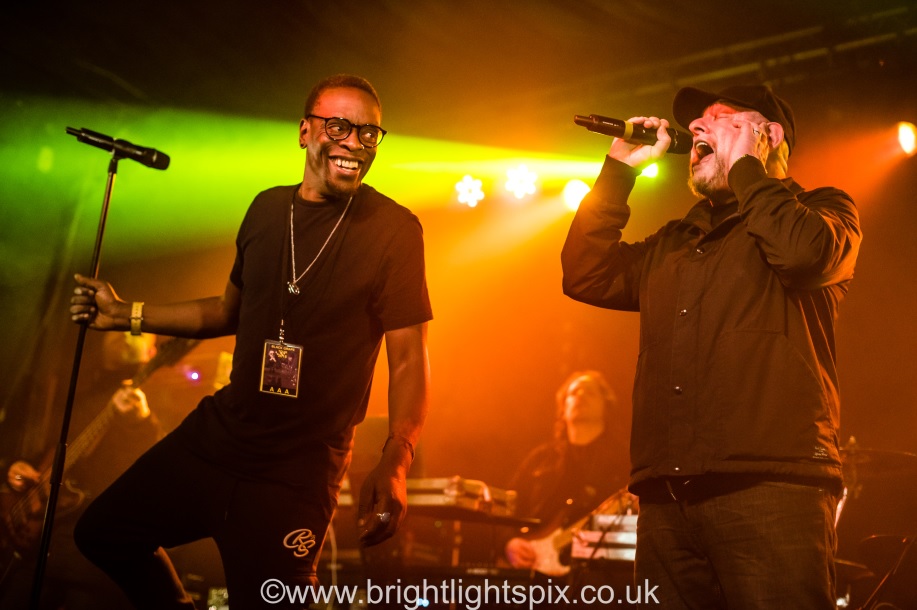 Black Grape are back! The legendary Shaun Ryder and Paul ‘Kermit’ Leveridge rolled into town with their accompanying 5 piece band to bring the Friday night party to the Brighton’s Concorde 2 and boy – did they deliver! 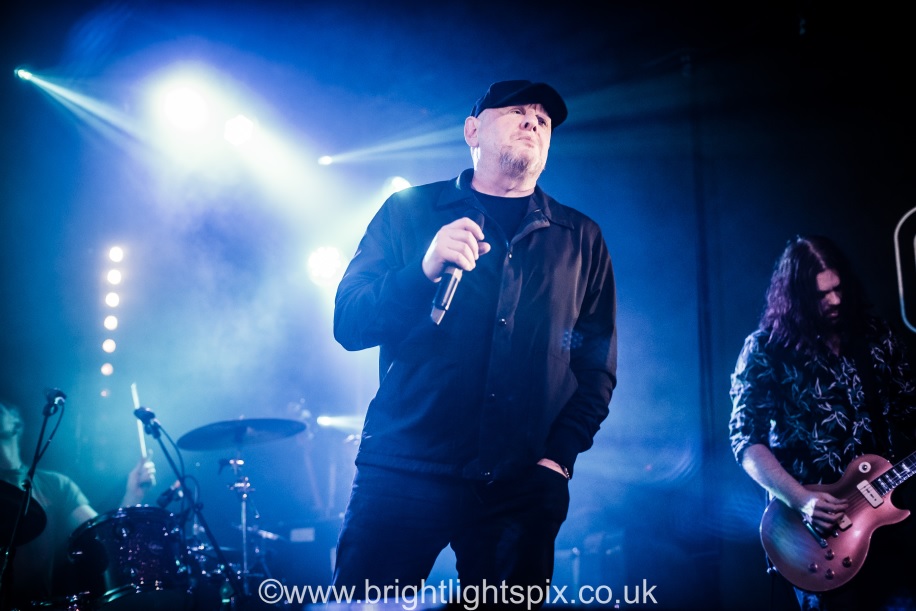 Black Grape were formed back in 1993 by Happy Monday’s frontman Shaun and Kermit from The Ruthless Rap Assassins. They went on to enjoy several hits from their debut album ‘It’s Great When You’re Straight….Yeah’ as well as number one position in the UK Album charts back in 1995. Black Grape’s songs combine elements of rock, hip-hop- acid house and reggae to create an original fusion that they execute in their live performances with great aplomb. 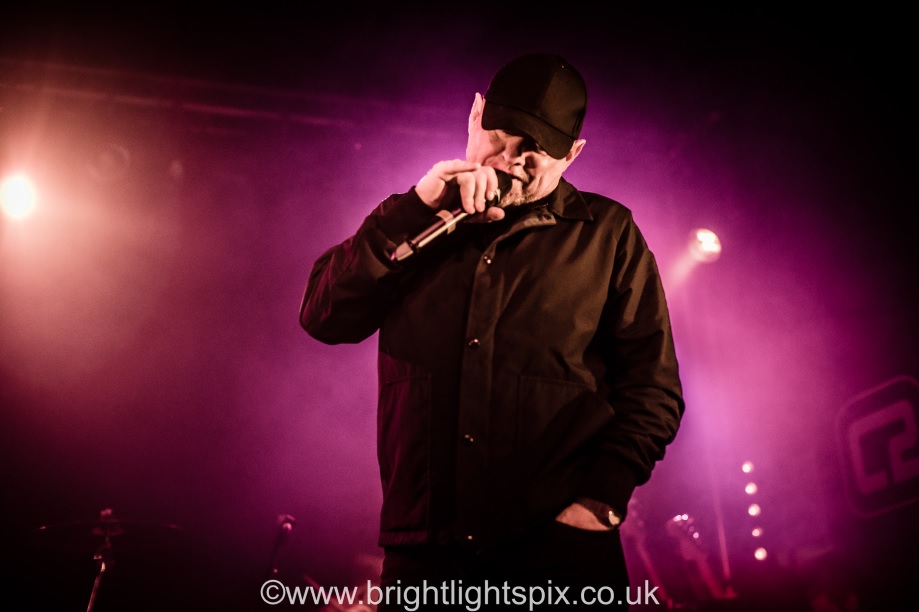 After a hiatus from the recording studio of almost 20 years, 2017 saw the release of their current ‘Pop Voodoo’ album, which reinforced the fact that these boys still write brilliant songs. Ryder alludes to a new-found maturity in their partnership and it’s not hard to see why as many of the new ‘Pop Voodoo’ tracks sat perfectly alongside those from 20 years ago and everything melded together extremely well during tonight’s show. 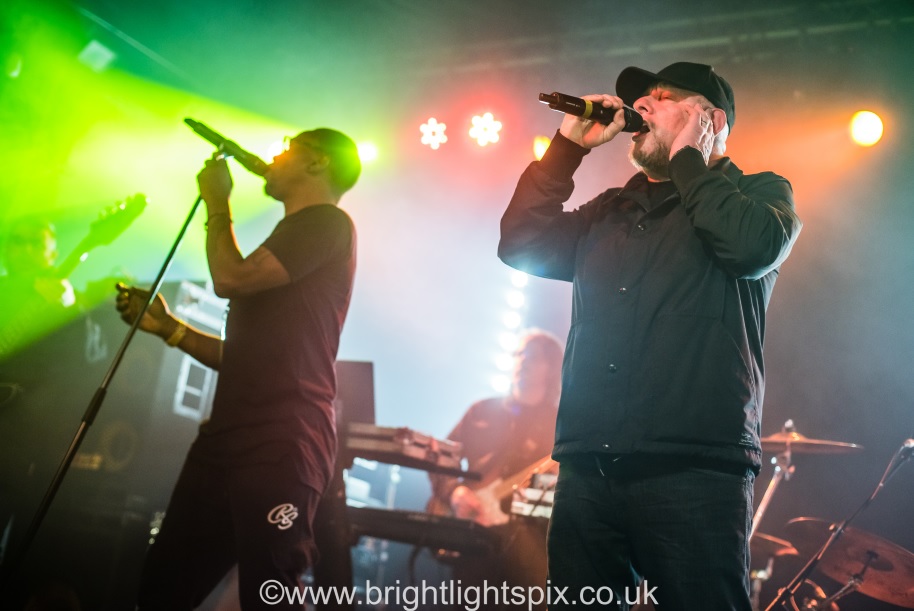 No messing around here, the set opened with a blistering version of ‘In the Name of the Father’ which got the party started and set the tone for the rest of the evening where the crowd lapped-up old and new songs alike. ‘Reverend Black Grape’ sounds like three songs being played simultaneously, but it just works and played live it’s even better with Kermit anointing the audience much to their delight. 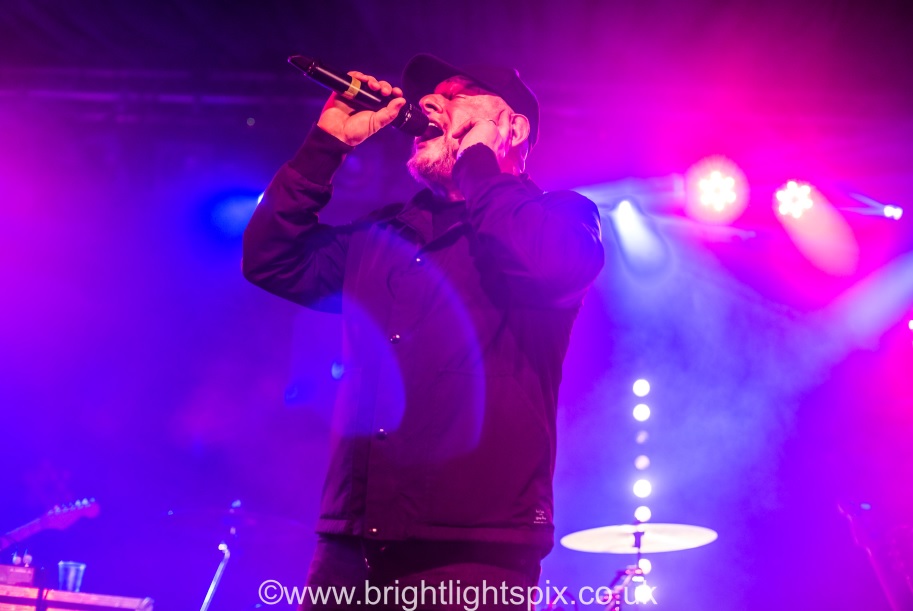 ‘Shame’ from the ‘Pop Voodoo’ album had a really funky edge to it, whilst ‘Kelly’s Heroes’ had the audience rocking back and forth with a mini mosh pit forming as those immortal lyrics “Jesus was a black man, no Jesus was Batman…..no no no that was Bruce Wayne” echoed round the venue. An extended version of ‘Little Bob’ with it’s distinctive BOOM! provided a great closing number as the singers left the stage to let the talented backing band bask in the glory at the end. 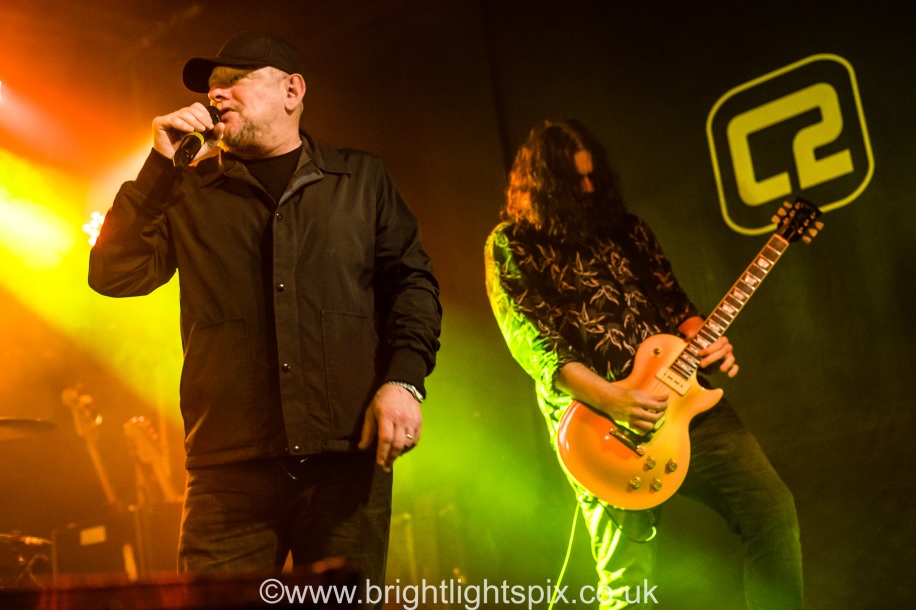 What’s great to observe is the camaraderie between Ryder, charismatic rapper Kermit and the rest of the band, they are clearly out to enjoy themselves at every show and the crowd enjoyed their banter throughout the set. They both had a drink on stage, but the drugs are a thing of the past. Ryder swigged from his bottle and delivered his lyrics in his inimitable style, his distinctive Manchester tones pervading the music whilst Kermit looked a picture of health after almost losing his life in 1997 with hepatitis. 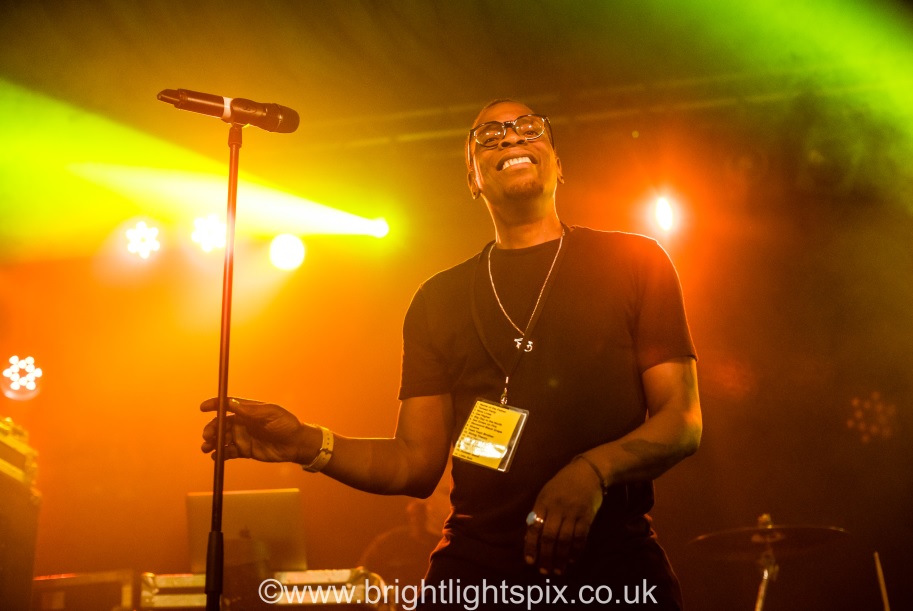 Kermit from Black Grape live at the Concorde 2 in Brighton 16.11.18 (pic Andy Sturmey)

He might be “nearly 60” as Ryder said himself (he’s 56), but there is no doubt that Black Grape are still making music that sounds as cool now as it did when they started out and on tonight’s evidence, they will be showing younger bands exactly how it’s done for a while to come. 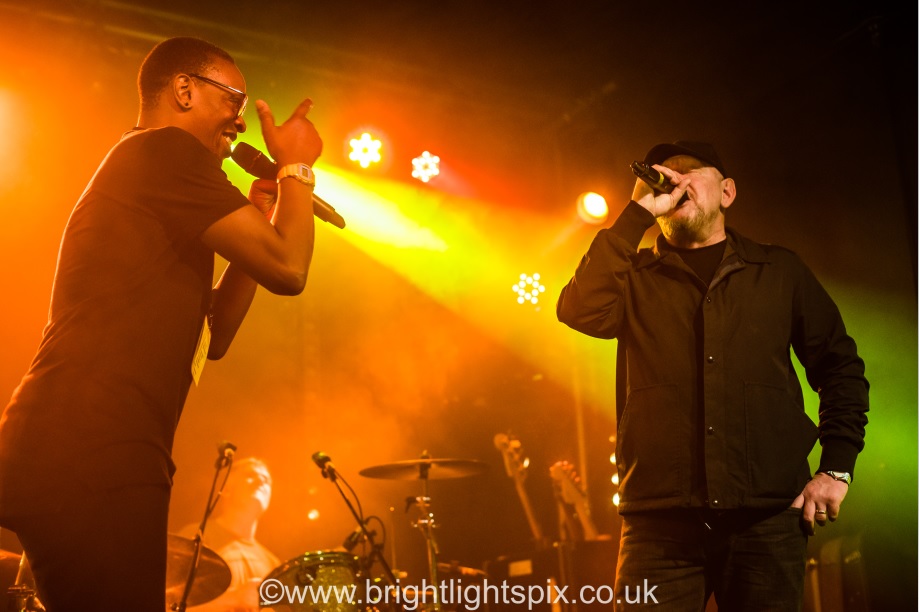 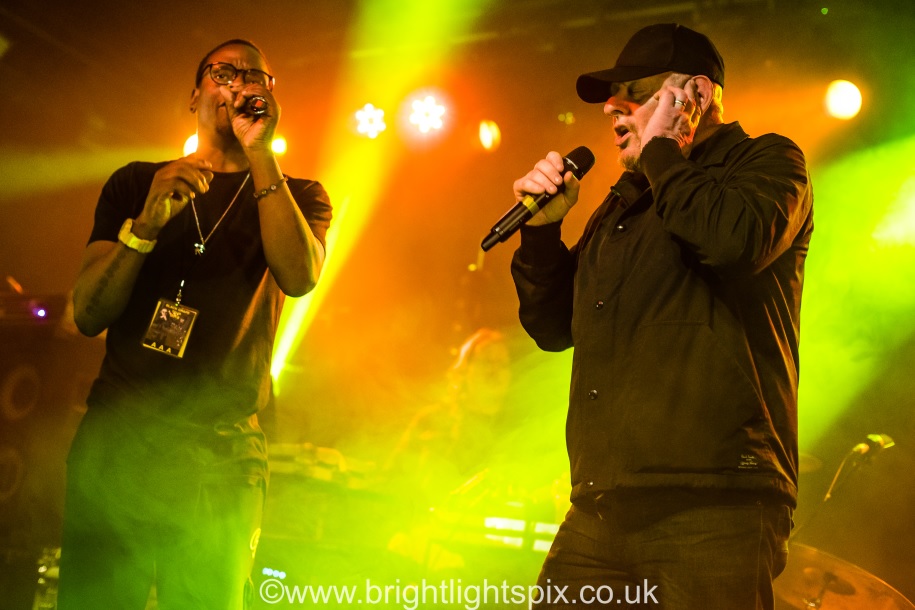 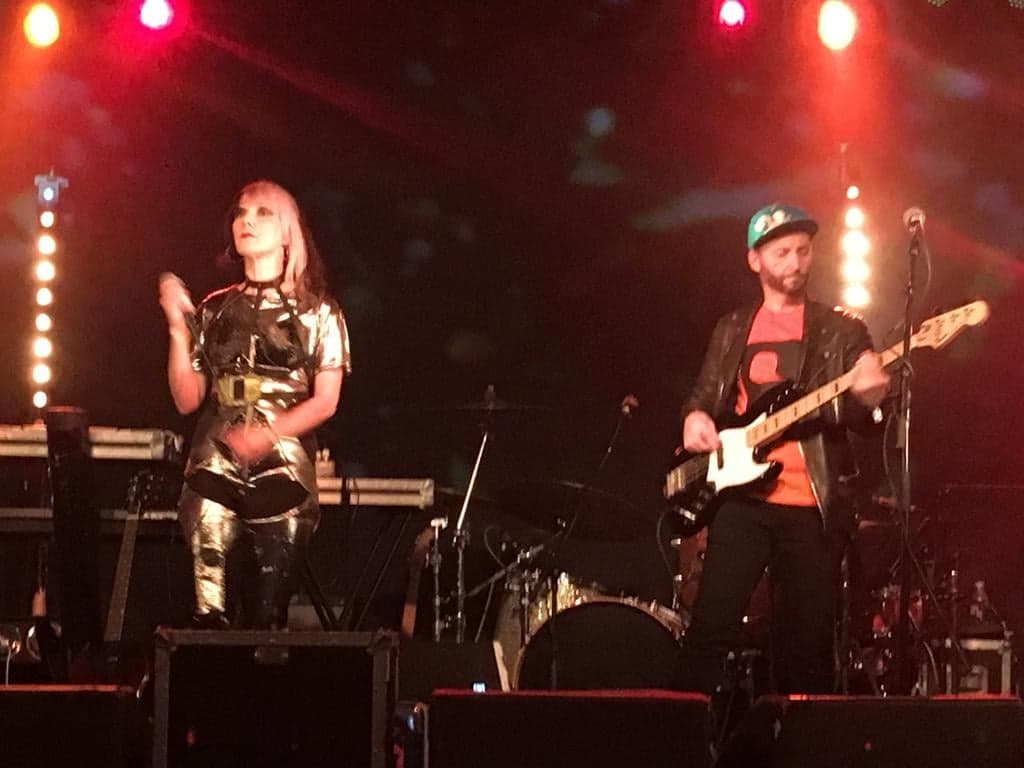 Support this evening came from London based Feral Five, although curiously there were just two of them, the ‘five’ being reference to their names Kat Five and Drew Five. The duo warmed the crowd up nicely with an original blend of post-punk electro, contrasting their guitars with a heavy synth backing tracks. I particularly enjoyed their songs ‘3D’ and ‘ManCatDollMachine’ with Kat’s vocals sounding a little Hazel O’Connor-esque at times. Singer Kat also mentioned she was originally from Brighton. They are definitely worth checking out…..www.feralfive.com

We meet Kermit after the show! 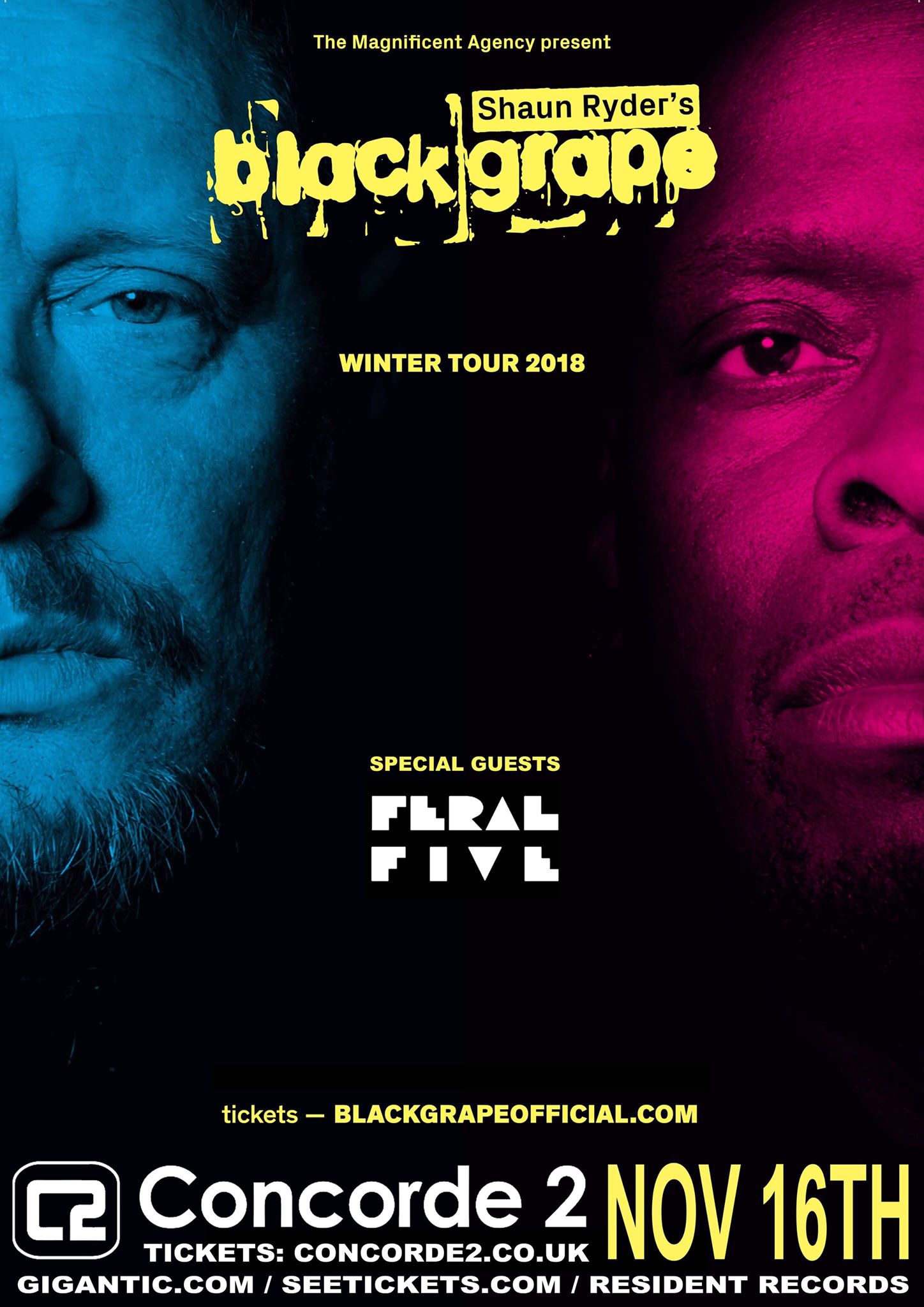