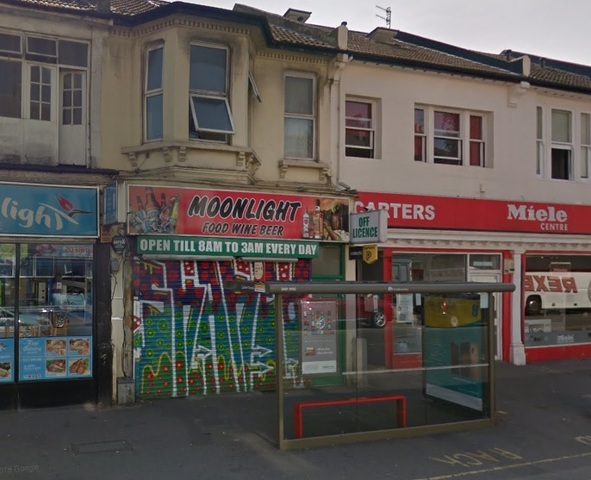 A new manager is attempting to reopen a “troubled” late night off licence which was stripped of its licence after selling fake and smuggled booze and failing underage test purchases.

The name on International Food and Wine’s licence in Preston Road changed several times during its “long history” of breaching licence conditions, and licensing officers often struggled to make contact with management.

Meanwhile, neighbours complained the 3am offy attracted antisocial behaviour, with customers shouting, fighting and urinating on their doorsteps in the early hours of the morning.

It was stripped of its licence in December 2017, with one councillor saying the “deceitful and criminal activities” taking place there meant it was one of the worst premises he’d come across” and last year an appeal was dismissed after yet another new manager failed to turn up to court.

It has now been renamed Moonlight, and a new applicant is applying to reopen with similar hours – but faces stiff opposition from neighbours, health officials, Sussex Police and council officers.

The licensing department is objecting to the application citing numerous problems at the shop.

“Although this is a different applicant to the previous premises licence but feel it is important to make the panel aware of the recent troubled history of this premises.”

The application in the name of Rany Dahwch, is for alcohol sales from 7am-1am Sunday to Thursday, and from 7am-3am Friday to Saturday.

Sussex Police is objecting to the late hours. Inspector Di Lewis writes: “Sussex Police note that Preston Road, while being largely a parade of shops, is also densely residentially populated with flats and other dwellings therefore the late opening hours would not be suitable due to potential nuisance this could cause to residence.”

Neighbours are concerned about increased noise and anti-social behaviour generated by an off-licence in the area.

One neighbour wrote: “As a resident in very close vicinity to the proposed premises there has been numerous occasions of noise disturbance which has occurred whoever puts the name on the licence.

“It has also come to my attention that the premises have previously applied and there has been a refusal and also has been revoked in the past. In fact, the last licence was refused, 19 January 2018.

“To me, and purely my assessment, there must be reasons for this and may suggest that possibly a repeat of nuisance behaviour and failings of the proprietor to adhere to the conditions of the licence which are meant to be followed legally.”

Another neighbour pointed out there are ten shops in the area where alcohol is on sale late at night.

They said: “Having such premises open until such a late hour attracts unwanted characters from outside our residential street allowing for more crime and disorder.

“The previous off-license which was in the same premises and with the same proposed late opening hours caused a lot of anti-social behaviour.

“Most late nights and weekends there would be lots of shouting, swearing, fights and shops were broken into including my own.

“It was very disruptive and impossible to get a quiet night’s sleep.”

Dr Peter Wilkinson, consultant in Public Health, has pointed out the business is on the edge of St Peter’s and North Laine ward, which has the second highest rates of alcohol related violence, crime and disorder.

The licensing panel will discuss the application when it meets at Hove Town Hall from 10am on Friday 18 January.