Two historic flint cottages are expected to be demolished to make way for a four-storey building containing student flats described as resembling a prison.

Forty-six people have written to Brighton and Hove City Council to object to the scheme by Tekton Student Living to replace 41 and 42 Park Wall Farm Cottages with 71 student rooms in a four-storey brick building.

Officials are recommending that the council’s Planning Committee approves the plans at a meeting next Wednesday (6 February).

Opponents of the scheme object to the loss of the historic-looking cottages, although they are not listed or in a conservation area.

One objector said on the council’s website: “I’m appalled to hear about this proposal, which is totally out of scale with the historic station buildings and cottages nearby.

“It would be highly visible – particularly from the Brighton University campus – and would ruin the view across to Sussex University and the wooded downland behind it.”

This anonymous commenter said that the cottages should be listed.

The Regency Society has not objected to the plans but asked for something “more sympathetic” to the area.

It said: “The proposed building is very unattractive, urban in appearance and resembles a prison.

“It was noted that the South Downs National Park is near by and this poor-quality building will be visible from the park.”

In a report to the Planning Committee, the need for student accommodation was described as “outweighing” the loss of two houses which have been empty for some time.

Another objector said: “Demolition of the beautiful farm cottages is a travesty. They are steeped in history and a beautiful part of what was the original village.

“The area is already massively overdeveloped with student accommodation and becomes 100 times busier when Albion are playing at home.

“The train station and bus stops are barely equipped to cope with the influx of people at the moment.” 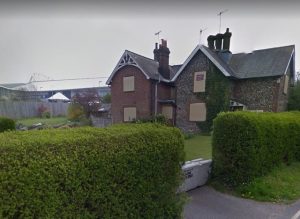 Four car parking spaces are planned for the site, including a disabled bay, plus storage for 56 bicycles.

Sussex Police listed a multitude of security measures for the site including details of fencing, secure bicycle parking and gates.

Without objecting to the scheme, the force said that its concern included the large number of people who moved through the area on match days and the potential for public order problems.

A previous application to redevelop the site with a four-storey, 91-bedroom student block was withdrawn in December 2017.

The Planning Committee is due to meet at Hove Town Hall next Wednesday (6 February). The meeting, which starts at 2pm, is open to the public.