A scheme to build ten houses on a slice of Varndean College’s grounds has been recommended for approval by planning officers despite hundreds of objections.

The Brighton college says it wants to build houses on a unused sloped bank next to its playing fields off Surrenden Road to fund improvements to the school including its new STEM centre, a new toilet block and kitchen.

Campaigners have successfully applied to have the field designated as an asset of community value (ACV) in a bid to stop the scheme – but planning officers say this has no bearing on whether planning permission should be granted because there is no regular access to the site.

The question of access has blown up in recent days after the gate to the Surrenden campus – which includes Dorothy Stringer, Varndean School and Balfour School as well as the college – was closed for health and safety reasons.

But the matter may be settled once and for all next week when the planning committee is due to decide whether or not to grant the college outline permission for the houses.

Also on the agenda is full planning permission for the college’s plans to install an artificial 3G pitch, which is also recommended for approval. 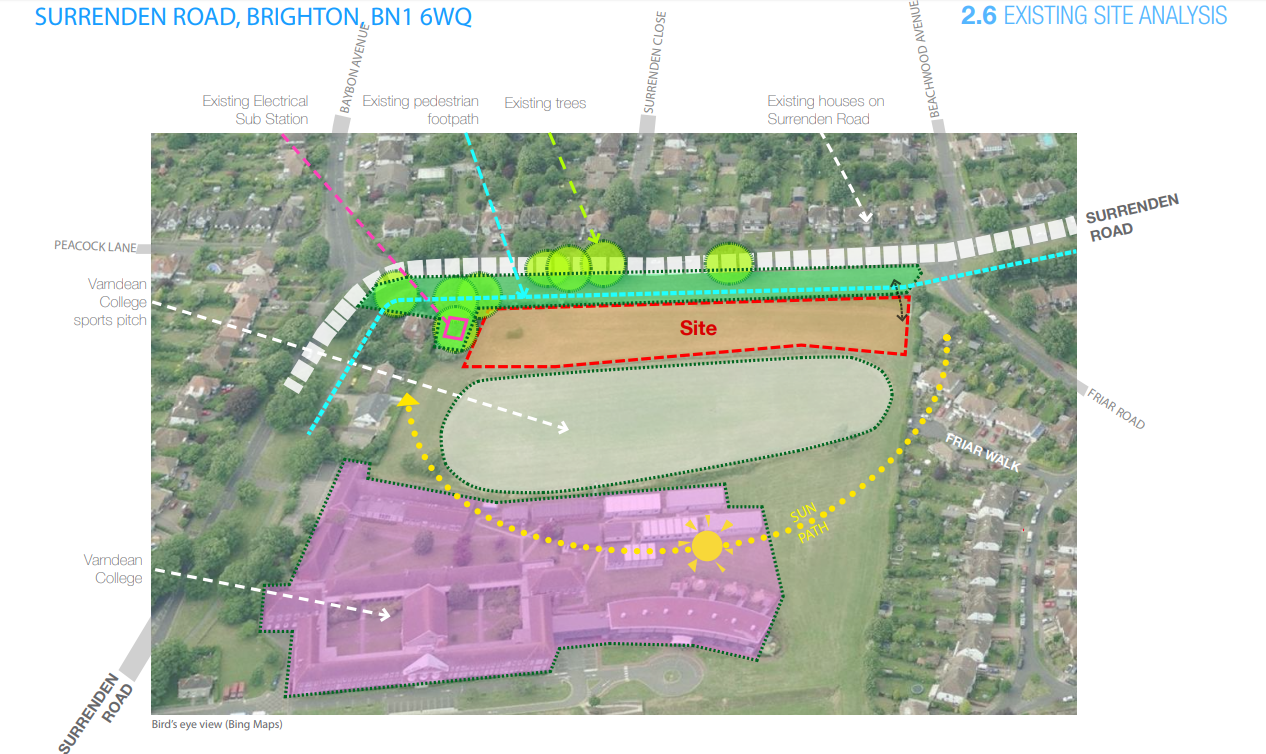 College head Phil Harland said: “The site is 0.63 hectares which is about one acre, out of a campus of 57 acres. The receipts from the ten houses will help fund further improvements to the school.

“I think some people are upset because of the principle of selling off school playing fields and I have some sympathy with that but we need satisfactory educational facilities.

“Brighton is blessed with two great colleges, Varndean and BHASVIC, but there’s a constant pressure to keep them up to date.

“There’s a principle that people think the government should pay for this, and I wouldn’t disagree but the reality is that austerity means the money I get needs to be spent on running the school and not capital investment.

“We are trying to do something which is proportionate.”

Mr Harland said he first locked the gates on advice from the college’s planning advisors in November, after the site was listed as an ACV. However, when he saw children climbing over the fence – and even some primary age children being helped over by their parents – he unlocked them as he thought it was more dangerous to keep them locked.

But once construction work on the college’s new STEM centre, for which planning permission was granted last November, started, the gates were once again locked as the site is now more dangerous.

Mr Harland said he had also been advised to secure the campus where possible by the city’s Prevent team, which works to protect and safeguard children from being drawn into extremism.

And he pointed to incidents where a flasher was able to escape police by fleeing through the schools’ campus or where a member of the public was able to access one school’s toilets as examples of why it was important to restrict access to the site.

Green VArndean said they were against building on the site because of the loss of green space. Campaigner John Davies said: “Granting of permission would seem to fly in the face of all kinds of advice about the importance of any green space for child development, for the physical and mental health of citizens, to prevent the collapse of ecosystems, to encourage biodiversity and to combat pollution.”

The ten houses will include two for affordable rent, and one shared ownership unit. It’s also proposed whoever develops the site makes contributions of £4,800 to the council’s local employment scheme, £43,844 towards recreation provision and £32,884 towards local education.

A range of conditions including restricting which trees can be cut or pruned and requiring new wildlife features to compensate for the loss of a butterfly bank and bat foraging habitats are proposed.

The reasons given by the 289 people who wrote to object to the plans are mixed, with the loss of green space and the impact on wildlife at the top of the list given in the report to councillors.

However, other objections contradict each other, with some complaining the site will be overdeveloped and some that it will be underdeveloped.

Objectors are also worried about the impact the ten houses will have on school spaces and other local amenities, as well as highway safety and parking.

Conservative ward councillors for Withdean Nick Taylor, Ken Norman and Ann Norman wrote jointly to object, saying: “Each of us have received numerous items of correspondence from local residents with their concerns for the proposed development. We share their concerns.

“The land has been designated a nature reserve and the loss of this land will do much to harm the local ecology of the area.

“In particular the green area gives the area an open green space and the permanent loss of such a space will be detrimental to the area.”

Another 27 people wrote to support the plans, saying they will provided much needed funds for the college.