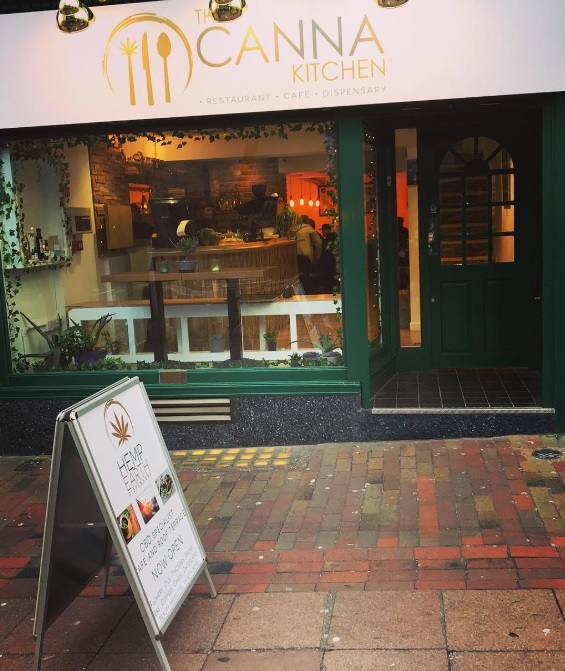 The UK’s first cannabis restaurant was one of three addresses raided by police in Brighton today – but the owners insist the “significant quantity of herbal cannabis” seized is legal industrial hemp.

Officers executed a warrant at Canna Kitchen in Duke Street, along with the Hemp Life head shop in London Road and a home address in North Place where a 36-year-old woman was arrested on suspicion of money laundering and supplying class B drugs.

On Wednesday night, she was still being questioned by police.

A spokesperson for Canna Kitchen said: “A quantity of stock was seized from our shop today. Our products are defined as industrial hemp, and are clearly and transparently imported as such, with all taxes and duties paid.

“Our products contain CBD and trace elements of THC in line with the UK legal guidelines for pharmaceutical definitions and UK legal definitions of CBD products.

“If trace elements of THC render these products illegal, then by default all CBD products must be illegal in the UK. This would mean that many large high street chains are currently breaking the law.

“We have never in the past year and a half had any confusion over the legality of these products, and are disappointed with the heavy handed approach of the Sussex Police force today.”

A spokesman for Sussex Police said: “Police in Brighton carried out three raids across the city on Wednesday (May 8).

“Warrants were executed at shops in London Road and Duke Street, and a home address in North Place, in connection with an investigation into money laundering and supply of class B drugs.

“At London Road drugs and cash was seized and one man attended a police station under caution for a voluntary interview.

“At North Place a 36-year-old woman was arrested on suspicion of being concerned in money laundering and the supply of class B drugs. She remains in custody.

“A further warrant was conducted at a shop in Duke Street and a significant quantity of herbal cannabis was seized.”

Canna Kitchen opened in December and features vegan and vegetarian food with the option of added cannabidiol or CBD, a non-psychoactive legal cannabis extract.

It also offers other cannabis extracts CBG and CBN as well as cannabis-derived flavours and fragrances.

Diners can also vape on the roof terrace.