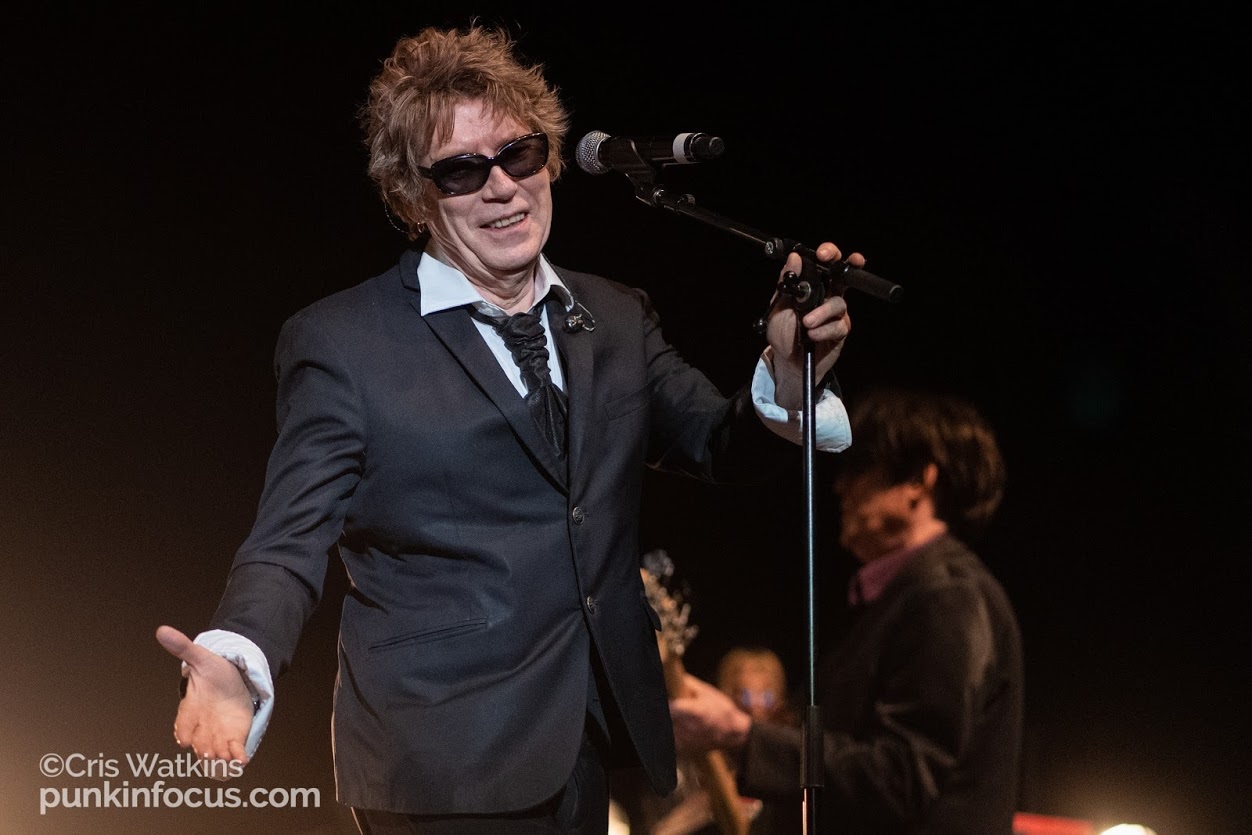 I really don’t understand how it has taken me so many years to finally get to see The Psychedelic Furs perform live in concert? It’s not as though I wasn’t aware of them four decades ago, I guess that I was just more into other similar bands such as The Cure, Echo & The Bunnymen and the like. But tonight I was going to address this situation.

I managed to secure a standing spot virtually right on the crowd barrier at the front, along with a few photographers who strangely had to be positioned our side of the barrier instead of in the pit. Even members of Brighton Dome’s security staff were commenting that this was rather unusual. 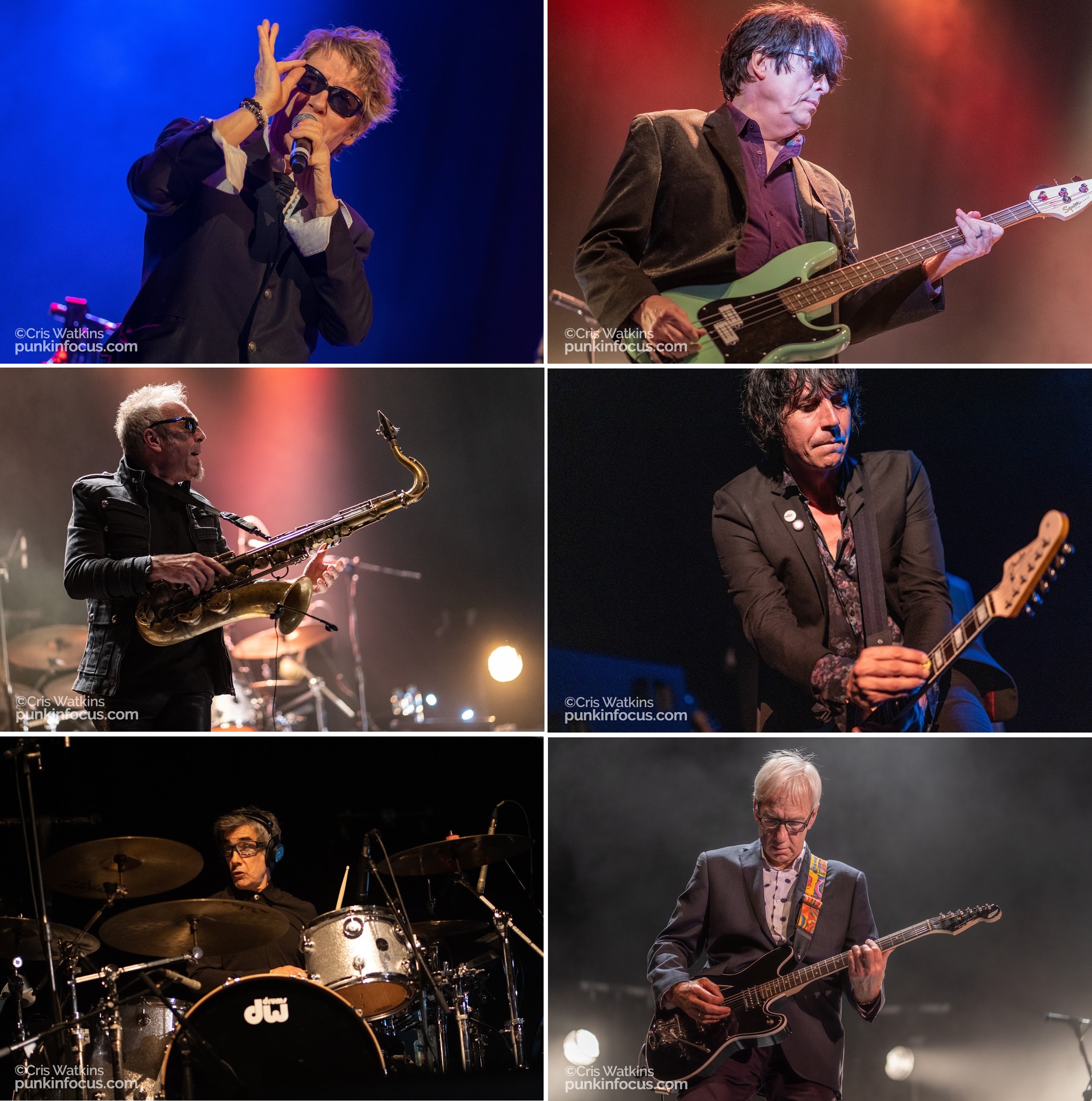 The intro music kicks in at 9:20pm and the seven piece band stroll on at 9:22pm to be welcomed by a packed audience. This was the start of an enjoyable sixteen tune set, which was their third of nine UK performances this month. The Psychedelic Furs are back in the UK (from The States where they now reside) to celebrate their 40th Anniversary since releasing their debut single ‘We Love You’ in 1979. Tonight was the turn of Brighton, having performed in Portsmouth last night and Manchester two days before that. The guys then scoot off to Birmingham and then take in dates in Leeds, Glasgow, Newcastle and Nottingham, before finishing off at the Roundhouse in London on Saturday 12th October.

The band continues to tour around the world as clearly there is a market for their sound. The current Psychedelic Furs touring lineup is made up of brothers and founding members Richard Butler (vocals) and Tim Butler (bass), along with Rich Good (guitar), Mars Williams (saxophone), Amanda Kramer (keyboards), and Paul Garisto (drums).

The first thing that struck me is that I had actually forgotten what a stage presence Richard Butler has and that he shares many characteristics with David Bowie and Pete Murphy. In fact, I was discussing this with an American chap in the audience that has seen them many times live before and he noted that Richard was particularly sprightly tonight and certainly had a bounce in his step. He was actually jumping up and down in between songs, which I understand is a little uncharacteristic, but his energy carried on past the performance and onto the after show party as far as I could tell from the photos that I have seen. Clearly he was trying hard this evening and I for one was more than pleased with this, as this was certainly not to be a dreary set, but a most enjoyable one, which was primarily made up of 75% of tunes from their 1980 to 1984 period. Although we did get a brand new unreleased track called ‘The Boy That Invented Rock & Roll’ which might turn up on the rumoured 2020 album.

Highlights for me were the aforementioned ‘The Boy That Invented Rock & Roll’ (because of the juicy echoey Nord Lead and Korg keyboards courtesy of Amanda), ‘Sister Europe’ from their 1980 ‘The Psychedelic Furs’ debut album, the powerful ‘Into You Like A Train’ plus ‘Pretty In Pink’ (both found on the 1981 ‘Talk Talk Talk’ album), ‘Love My Way’ (from 1982 ‘Forever Now’ album) and ‘Heaven’ (from 1984 ‘Mirror Moves’ album). Time had flown by and it was 10:43pm and that was our lot and I can report that they were better than I thought that they would be. Hopefully they will return next year! 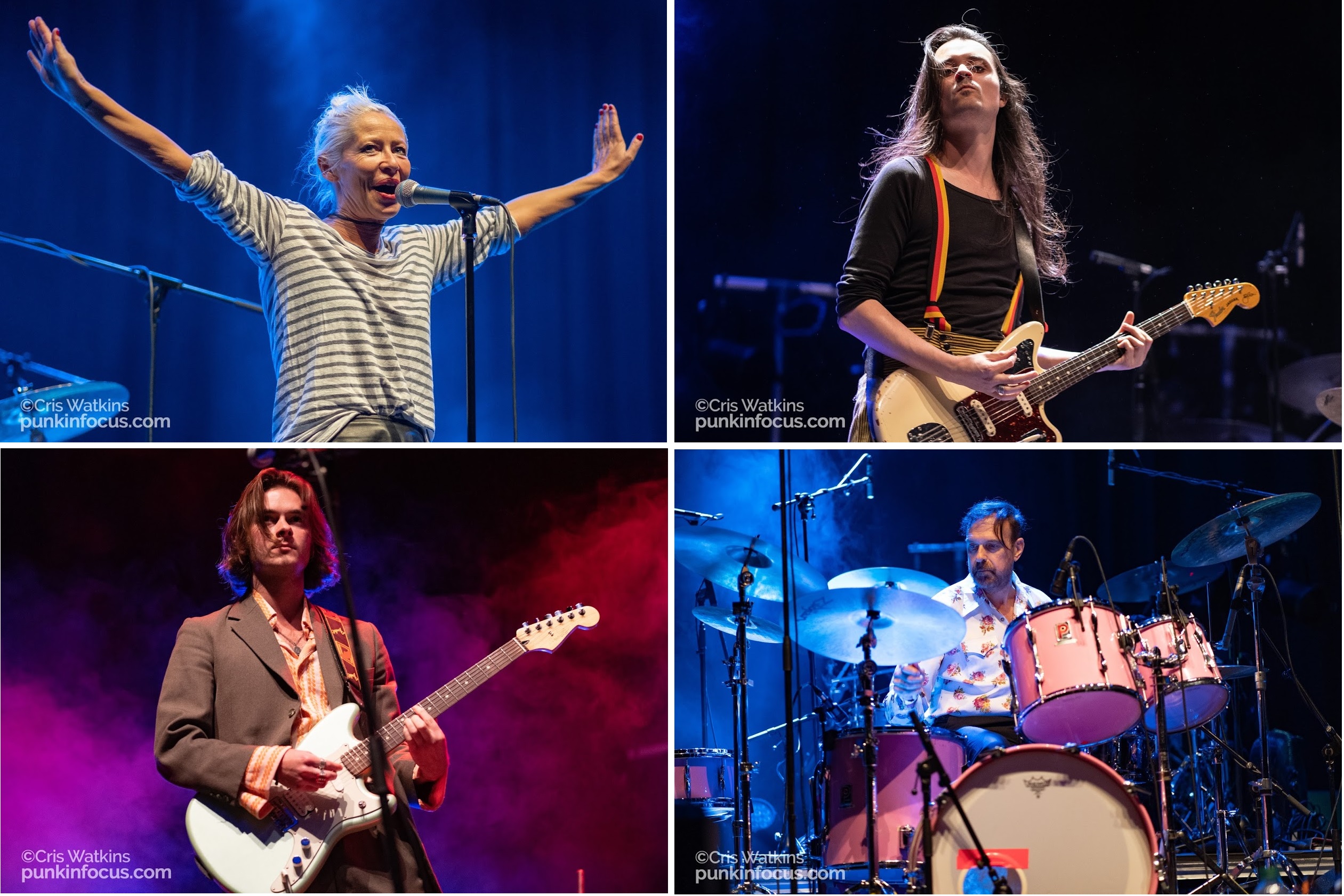 Wendy James was one of the most iconic figures in music in the 1980’s/early 90’s as the lead singer of Transvision Vamp, who produced a slew of chart-topping singles including ‘I Want Your Love’ and ‘Baby I Don’t Care’. Following the release of the Elvis Costello written solo album ‘Now Ain’t The Time for Your Tears’ in 1993, James stepped out of the music industry. She made a come back releasing a second solo album ‘I Came Here To Blow Minds’ in 2011 and ‘The Price Of The Ticket’ in 2016. Her new solo 20 track album ‘Queen High Straight’ is available from her official website – More info HERE.

Tonight they performed a dozen song set consisting of several Transvision Vamp numbers as well as newer material. They set the tone by kicking off with ‘Tell That Girl To Shut Up’ and shortly after the Blondie-esque ‘You’re A Good Man, Sister’ was given an outing. ‘I’m Freaking Out’ was delivered akin to The Ramones and ‘The Impression Of Normalcy’ from ‘Queen High Straight’ was suggested that it may well be their next single. For myself, the closing number ‘Baby I Don’t Care’, was the highlight of an enjoyable set. I had actually forgotten how well spoken Wendy was and would like to single out ‘Pip’ for his terrific guitar playing, as well as James on his striking pink drum set.

Strictly speaking, The Psychedelic Furs formed in London in February 1977 during the emerging punk scene and initially consisted of Richard Butler (vocals), Tim Butler (bass guitar), Paul Wilson (drums), Duncan Kilburn (saxophone), and Roger Morris (guitars). By 1979, this line up had expanded to a sextet with Vince Ely replacing Wilson on drums and John Ashton being added on guitar.

The Furs debut, a self-titled album from 1980 was produced by Steve Lillywhite. The LP quickly established the band at radio in Europe and was a top 20 hit in the UK. The album also found success in Germany, Italy, France, Spain, New Zealand and Australia.

The Furs found success in the U.S. with their next release, 1981’s ‘Talk Talk Talk’, which saw the band making its debut on the US album charts. In New Zealand, meanwhile, the band became immensely popular, as ‘Talk Talk Talk’ reached the top ten in the charts, the first in a string of Furs’ albums to chart in the New Zealand Top 10.

In the UK, the album spun off two charting singles, ‘Dumb Waiters’ and the original version of ‘Pretty In Pink’. The latter song served as inspiration for the 1986 John Hughes film of the same name, and was re-recorded for the film’s platinum-selling soundtrack.

In 1982, the Furs, now a four-piece with the departures of Morris and Kilburn, recorded ‘Forever Now’, with producer Todd Rundgren in Woodstock, New York. This album included ‘Love My Way’, which became yet another UK and US chart hit.

Ely left the band after ‘Forever Now’, although he would return for the 1988 single ‘All That Money Wants’ and the 1989 album ‘Book Of Days’.

The Furs’ 1984 release ‘Mirror Moves’ was produced by Keith Forsey, and featured the songs ‘The Ghost In You’ and ‘Heaven’. Both charted in throughout the world, and ‘Heaven’ became the band’s highest charting UK hit at the time.

By the mid-80’s, the band had become a staple on both U.S. college and modern rock radio stations. Simultaneously, they were experiencing consistent mainstream success, placing several singles in the pop charts on both sides of the Atlantic.

In 1986, the band recorded a sax-infused version of ‘Pretty In Pink’ for the soundtrack of the film of the same name. Released as a single, it became their biggest hit to that time in the U.S., and their biggest-ever UK hit.

‘Midnight To Midnight’, was their biggest Top 40 album success to date, but also a more overtly commercial effort than the Furs had ever recorded before. The album also featured the single ‘Heartbreak Beat’, which became the Psychedelic Furs biggest hit yet on the U.S. Top 40. The album also featured drummer Paul Garisto and sax player Mars Williams, both of whom continue to tour with the band.

In the wake of ‘Midnight To Midnight’, the Furs subsequently returned to a rawer sound with ‘All That Money Wants’, a 1988 track especially recorded for a best-of compilation album ‘All Of This And Nothing’. 1989’s ‘Book Of Days’ and 1991’s ‘World Outside’ also saw a return to the earlier Furs’ style.

The band went on extended hiatus in the early 1990’s, with the Butler brothers going on to create the band ‘Love Spit Love’ along with guitarist Richard Fortus and drummer Frank Ferrer. Love Spit Love released two albums and enjoyed some chart success as well.

After spending most of the decade apart, the Butlers and Ashton reignited The Psychedelic Furs in 2001, and released a live album ‘Beautiful Chaos: Greatest Hits Live’, which also featured a new studio recording, ‘Alive (For Once In My Lifetime).’ A DVD version of the performance included live versions of ‘Alive’ and three other previously unreleased songs: ‘Anodyne (Better Days),’ ‘Cigarette’ and ‘Wrong Train’.

Since then, lead singer Richard Butler has released an eponymous solo album produced by Jon Carin, and has hinted at the possibility of a new Psychedelic Furs album. 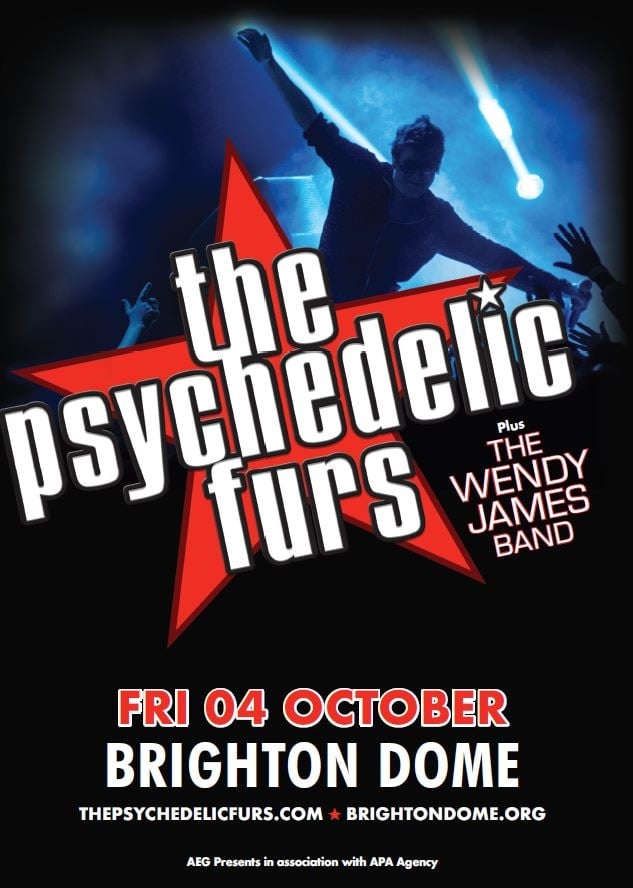 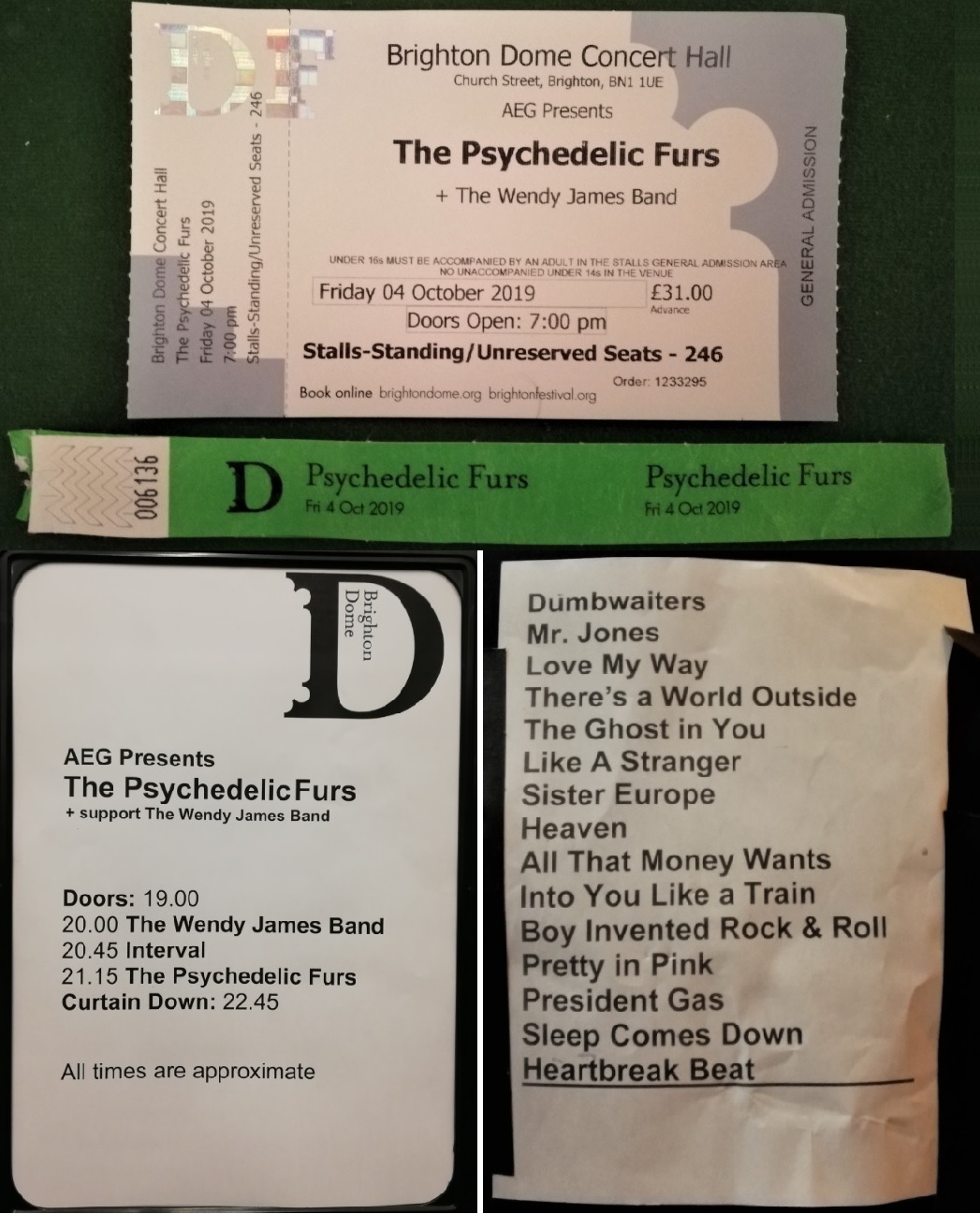