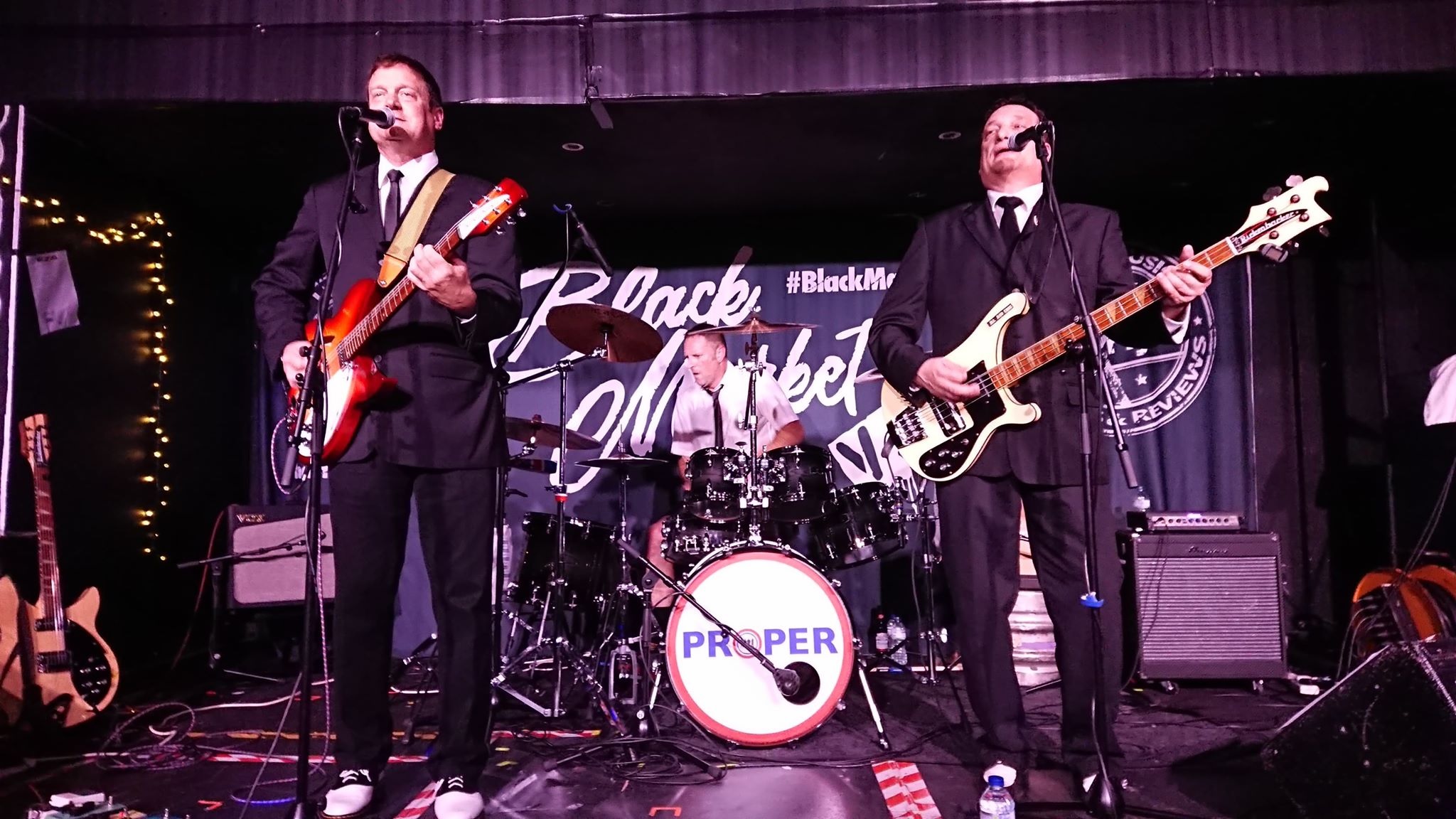 Friday night in Hastings was a particularly busy one musically with the likes of local favourites Kid Kapichi playing, but as tempting as that was, nothing would keep me from revisiting the wonderful BlackMarket VIP in the heart of the Old Town for the opportunity to catch up with a band I hadn’t seen play live for 23 years, and whom hadn’t toured in the UK for 15 years, All Mod Cons. It is their 30th Anniversary tour, but alas it will also be the last time that they visit these shores with Hastings being their second last ever gig in England. They had visited The Green Door Store in Brighton on Wednesday.

Back in the early nineties I was desperate for a band to replace my childhood favourites The Jam. As much as I adored Paul Weller, even travelling to France to watch The Style Council play live, for me he never quite hit the heights of his early days. From purchasing everything he ever made it is with some sadness that I no longer follow his career. Suddenly along came the concept of the tribute band, which I had not been familiar with until a three piece from Boston in Massachusetts burst onto the scene. I remember thinking it quite ironic given Weller’s disdain for all things American in his days with The Jam, and the relationship the band had with the very English Mod scene, that this band would dare to take on classic songs from British music’s voice of a generation. Could anyone actually clone the sound and image of The Jam? The first time I saw them was at The Marquee Club on Charing Cross Road, where on that night they broke the attendance record for a gig at that particular venue, showing that I obviously wasn’t the only one missing The Jam and the crowd were loving the fact that the void in their lives had been filled.

I was immediately taken aback by their energy which I had never thought could be recreated by any band other than The Jam. They had the look down to the 1977 suits synonymous with ‘In The City.’ I also caught them at Subterania in Ladbroke Grove and The Mean Fiddler in Harlesden before they seemed to go off the radar until now. The Subterania gig stands long in my memory and not just because All Mod Cons were outstanding, but also because they didn’t come on stage until near midnight when I was really hoping to be ‘down in the tube station’ making my way home to the wife. This rendered my mate and I lost in a ‘strange town’ pre-Google Maps and I recall walking through streets unknown trying to locate a night bus on a ‘school night’ and not getting back home until it wasn’t long before I had to get up. Thankfully tonight I only had to walk half a mile to the venue, so there was little chance of a repeat of the Subterania debacle. Orienteering at cub scouts was wasted on me. 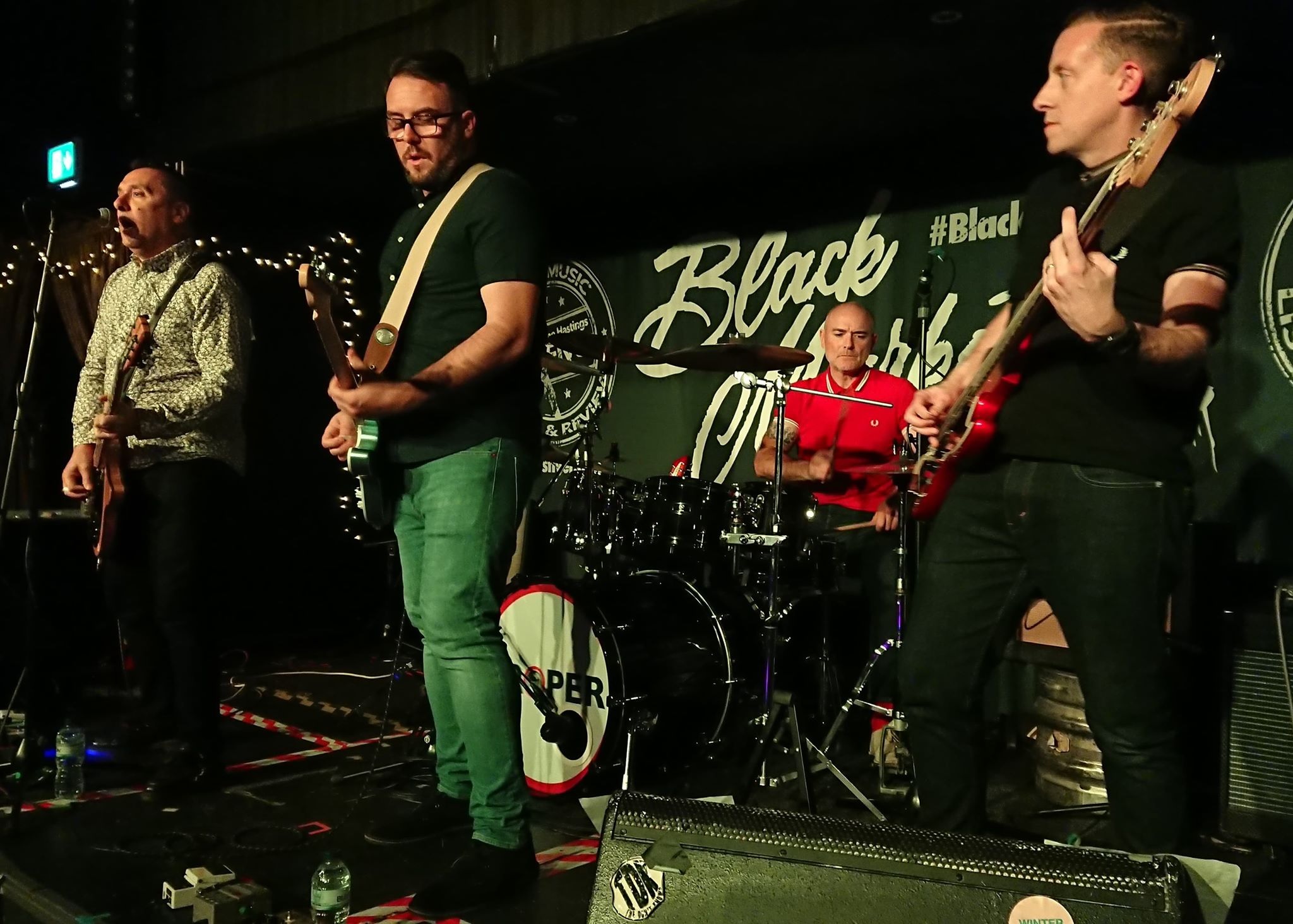 First up tonight was a new band to me named ‘Proper.’ Given who they were supporting and that Len and Jez were kitted out in Fred Perry tops, it was already looking promising though you can never judge a book by its cover and though the image looked good I was yet to hear their music. Lead singer Ivano had also gone around the room and handed out ‘Proper’ badges to all the audience which was a nice touch and mine is currently adorning my Harrington. ‘Proper’ describe themselves as a powerpop band and there are noticeable musical influences from the Mod revival scene, which is confirmed when Ivano tells the audience that ‘Sinister’ was produced by drummer with ‘The Chords’ (the most underrated band ever in my humble opinion) Brett ‘Buddy’ Ascott.

Formed in 2015 ‘Proper’ released their debut album ‘To the Point’ in 2017 and played four tracks from it tonight: ‘Beg To Differ’, ‘Lucky Things’, ‘Ready’, and ‘A Different Scene’. They have also released two EP’s this year and we were treated to all six tracks from them: ‘Sinister’, ‘Somewhere’, ‘The Resolve’, ‘Welcome To This Town’, ‘Ritornero’, and ‘Dead On Noon’. I now have these in my possession and have to say that they are worth playing in your car CD player as they are catchy tunes which will cheer you up and keep road rage to a minimum.

The set was up-tempo only slowing down for ‘Ready’ before a barnstorming end to their set including my personal favourite ‘A Different Scene.’

Lead singer, Ivano, is the focal point of the band and uses his charm and personality well onstage but is ably supported by Jez with his impressive bass playing, Joe on guitar and Len on drums, to form a tight knit sound. It would be interesting to hear some backing vocals which are used on recordings, but were not on show tonight, but you really cannot fault their musical ability. Even though sparsely attended the reaction from the crowd was good towards the support band and Ivano commented that it sounded like there were 500 in the room. He also joked at his own expense about why he realises that not many guitarists use the Rickenbacker nowadays as they are very hard to tune, though it wasn’t that noticeable to the untrained ear.

A lengthy 13 track set from a support act being so well received is an achievement in itself and ‘Proper’ are a band definitely worth catching on their travels. 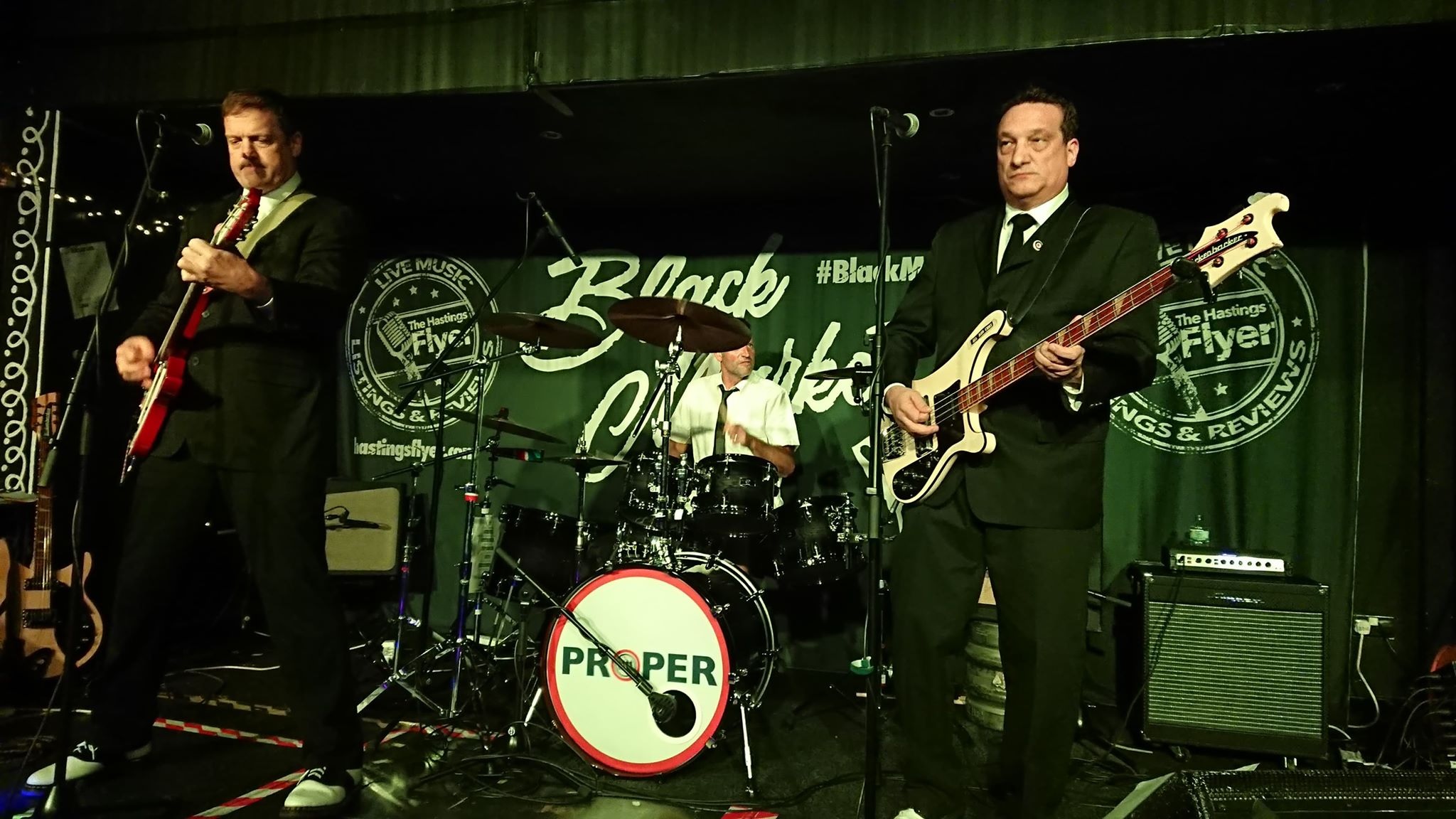 Now for the moment I had been waiting for since April 1996. With the formation of The Gift in 2006 (Rick Buckler), shortly followed by From The Jam in 2007 (Bruce Foxton and for a couple of years Rick Buckler), there has been less need for tribute bands of The Jam as both had original members present in the line-ups, though that hasn’t stopped a few English bands from forming and continuing to tour, though it was probably less financially viable for All Mod Cons to cross the Atlantic to do so with the emergence of more acts, which probably contributed to the 15 year break from touring the UK.

All Mod Cons took to the BlackMarket stage in the same style smart Jam suits they wore back in 1996, though they may be slightly larger in size nowadays. There was a new, to me, addition to the band in the shape of AJ Beaulieu (Buckler) on drums who was wearing a white shirt and black tie, but let the side down with his black shorts, though it would soon become apparent as to why. AJ was only nine years old when All Mod Cons formed in 1989 and took over the sticks some 16 years ago just prior to their last UK tour.

Looking at Barry (Weller) and Glenn (Foxton) just prior to the show, I must admit that I wasn’t sure if their hearts were in it, but once they kicked off with ‘Thick As Thieves’ the years were rolled back instantaneously. The set went from strength to strength and my vocal chords were tested to the max as I sang along to every song. Apart from the obvious ‘Down In The Tube Station At Midnight’, my favourite song of the night was ‘But I’m Different Now’ taken from ‘Sound Affects,’ The Jam’s 5th studio album, but in truth every song was almost performed to perfection, but with the rough edge of an early Jam gig which made it all the more authentic.

As previously mentioned AJ was donning shorts and by “A’ Bomb In Wardour Street’ it was obvious why as he finished off the song with a wonderful drum solo which had me perspiring just watching it. He continued to put his own mark on songs which I’m sure that Rick Buckler was unable to do, but AJ’s energy, enthusiasm and drumming expertise was second to none, and dare I say he is better than Rick Buckler was in his heyday.

All Mod Cons gamble on playing songs by The Jam that you are unlikely to hear anywhere else including ‘Standards’ and it pays off. Glenn recited how he met Vic Coppersmith-Heaven, record producer for The Jam, at The Marquee in ’93 and he had told them that they should never play one song live and yet here they were tonight defying those words by finishing of their set with ‘Life From A Window,’ another song that you probably won’t hear played live elsewhere.

There was an issue with the lighting during the set, but when it was attempted to rectify the problem we were left with something reminiscent of ‘Close Encounters of the Third Kind’ which made it easier to take photos if nothing else.

The band don’t take themselves too seriously and appeared to enjoy the intimacy of the gig. Barry commented on how the jumps were a bit higher 15 years ago and the need for diuretics nowadays means that a toilet needs to be close to hand. Barry may have got his Welleresque vocals down to a tee, but when asking the crowd at the recent Woking gig about his English accent after 30 years, he was told in no uncertain terms that he requires a further 30 years practice to which he laughed.

Barry also gave a special ‘Thanks to the guy at the front wearing The Jam t-shirt, that is very inspiring to us” and that guy just happened to be me.

The only disappointment was that they omitted the last two songs from the setlist, ‘In The Crowd’ and ‘Private Hell’, but still it was a great evening, and I even had the opportunity to speak with Barry and AJ afterwards, who are both down to earth regular people. Barry and Glenn have been best friends since 1977 and just formed the band because of their mutual love for The Jam, not realising how much it would take off in the early days. Sadly their race is run in the UK, but they gave us some memories along the way and kept the flame burning for fans of The Jam for quite some time. It is appropriate that they play their last ever UK gig at The Hope and Anchor in Islington, a venue which The Jam frequented in their early days.

Well done to the BlackMarket VIP for putting on this show, but disappointingly the apathy of the Hastings public meant that they missed out on this opportunity to witness one of the best tribute bands on the circuit.

Further information on All Mod Cons can be located here – www.allmodcons.info 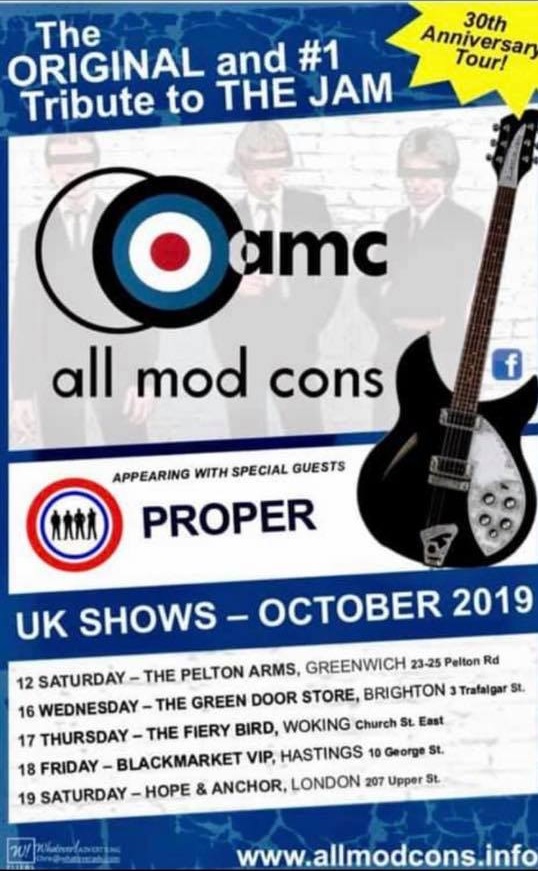