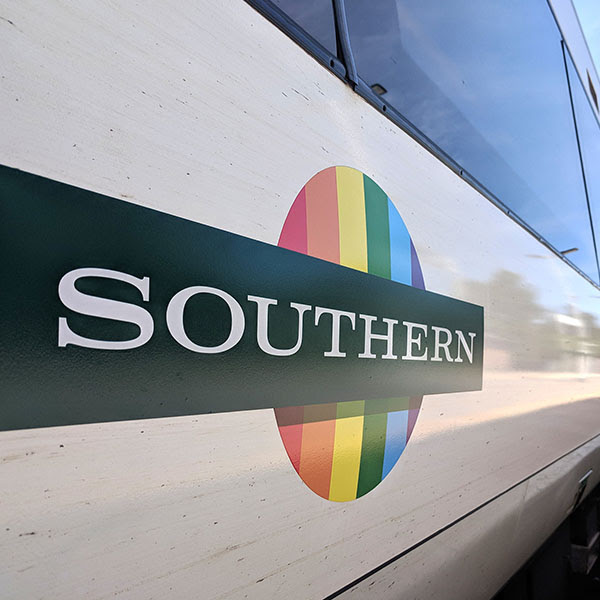 Southern is to scrap off-peak trains from Brighton to Victoria as part of a raft of changes on the Brighton mainline this summer.

GTR, which operates Southern, Thameslink and Gatwick Express services, says it needs to make the changes while major works to lengthen the platforms at Gatwick take place.

Thameslink and Gatwick Express trains will carry on much as they are but Southern services from Hastings and Littlehampton to Victoria will be run as separate services rather than combining at Haywards Heath.

To achieve this, all off-peak Southern trains from Brighton to London will go from May 17 this year until at least 2022 – and possibly longer.

UPDATE/CORRECTION: change is for Gatwick upgrade. Only route to suffer less trains is Btn-Vic. There will 1 morning peak train a day, all off-peak @SouthernRailUK to Victoria will be cancelled. Initially until 2022 but Southern won’t/can’t confirm if train will ever return. pic.twitter.com/YeozRRMSyC

“There will be one morning peak train a day, all off-peak Southern Rail to Victoria will be cancelled.

“Initially until 2022 but Southern won’t/can’t confirm if train will ever return.

He added: “The only way to get to Victoria [off peak] without changing will be the £££ express ticket.”

He also posted a letter from GTR outlining the changes, a full copy of which Brighton and Hove News has seen.

“During these two years, a 30mph speed restriction will be in place and platforms will be unavailable. These platform works mean that there is no option but to develop a dedicated timetable as the Brighton Main Line, the railway running through Gatwick Airport, can accommodate fewer trains per hour.

“While we have to run fewer trains per hour, those trains will be longer wherever possible.

“The timetable has also been designed to deliver a punctual service so that passengers can rely on connections.

“Importantly, it also has enough flexibility to allow us to recover the service when disruption occurs. Two things passengers have told us are important to them.”

The letter invites Mr Russell-Moyle for a briefing on the £150 million upgrade to Gatwick Station. 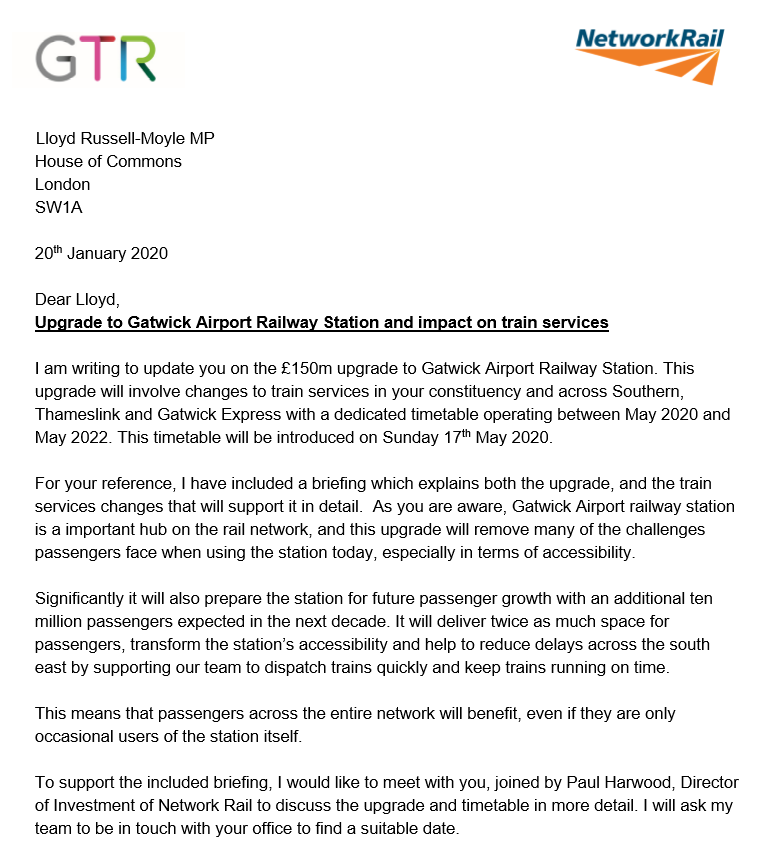 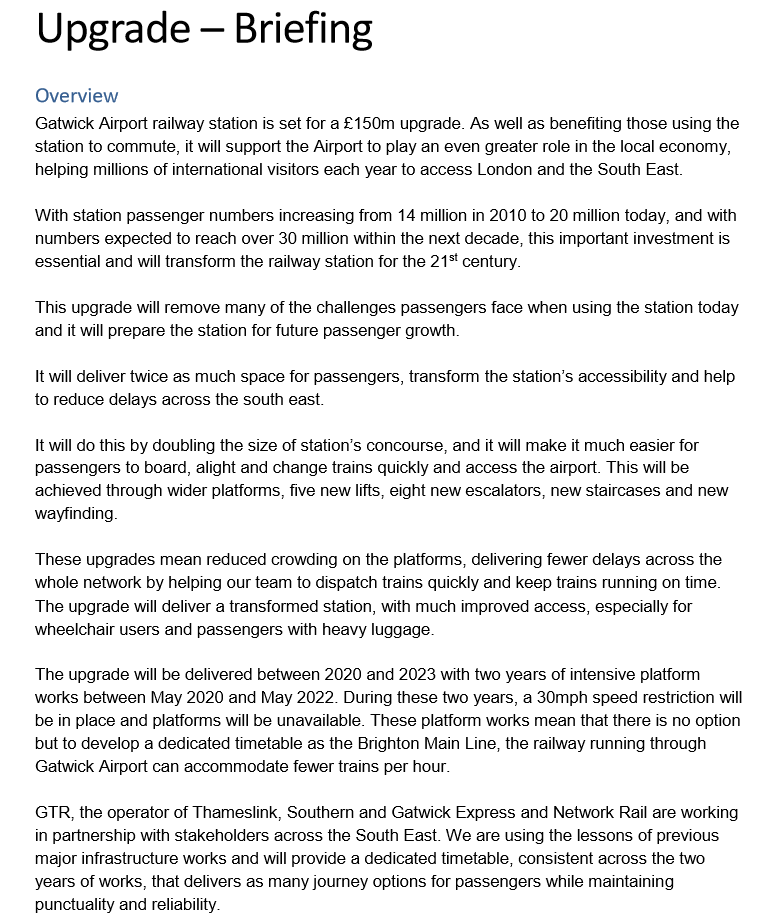 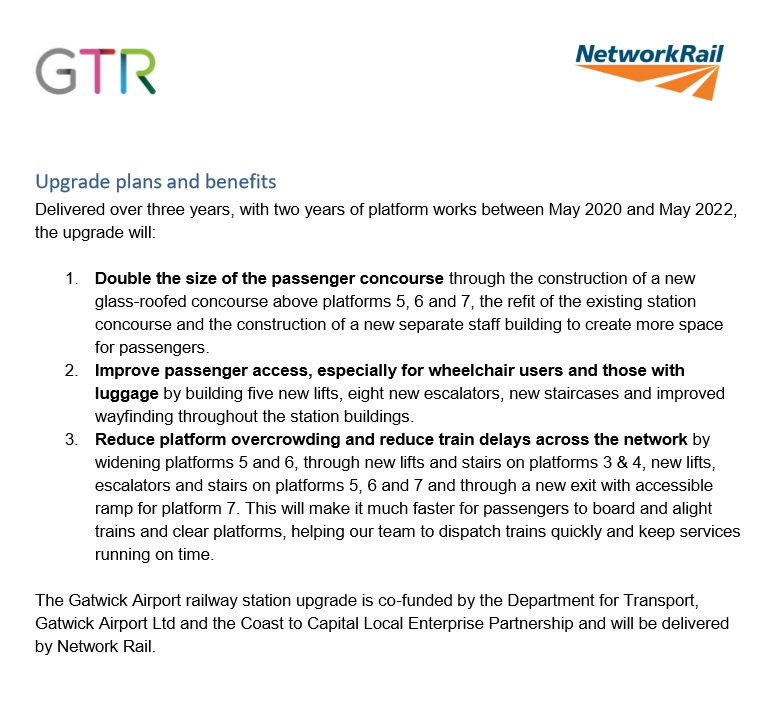 A spokesman for GTR said: “The division and joining of trains at Haywards Heath, in combination with overtaking moves by other trains adds a significant level of operational complexity to the network in the current timetable. When the platform work at Gatwick Airport starts in May 2020, we will have fewer options available meaning that maintaining these division and joining moves creates major potential for delay across the network.

“The elimination of most division and join moves at Haywards Heath will improve reliability while the line is able to accommodate fewer trains, by removing a significant operational move and with it, the prospect of delay.

“It also significantly increases passenger capacity on the two routes, both of which are the most crowded services in the south with passengers regularly standing for over one hour. This will represent a major service improvement for passengers on the routes to and from Littlehampton and Eastbourne at stations such as Preston Park or Lewes.

“We recognise that this will involve change for passengers at Brighton. We are maintaining eight trains to London per hour in the high peaks, and while outside of these times, the service will reduce to six trains per hour, we will be running longer trains.

“This means that for most passengers to / from Brighton, this is more about travelling at a slightly different time or by a different route than a significant reduction in space.”

He added that off-peak passengers buying a travelcard to use the tube won’t have to pay any more than they do today to travel direct from Brighton to Victoria because these tickets are valid on Gatwick Express.

Angie Doll, Managing Director of Southern and Gatwick Express, said: “With over 20m passengers now using Gatwick station every year, this upgrade is essential to address overcrowding, improve accessibility and maintain a sustainable, reliable and punctual rail service for visitors and commuters along the route alike.

“This revised temporary timetable will create room for the work at the station while retaining as many services as possible, supplemented by longer trains.

“Gatwick supports the economy of the entire South East, bringing international travellers and trade to the region worth £2.7bn, supporting 70,000 jobs.”

More information about the route changes can be found here.