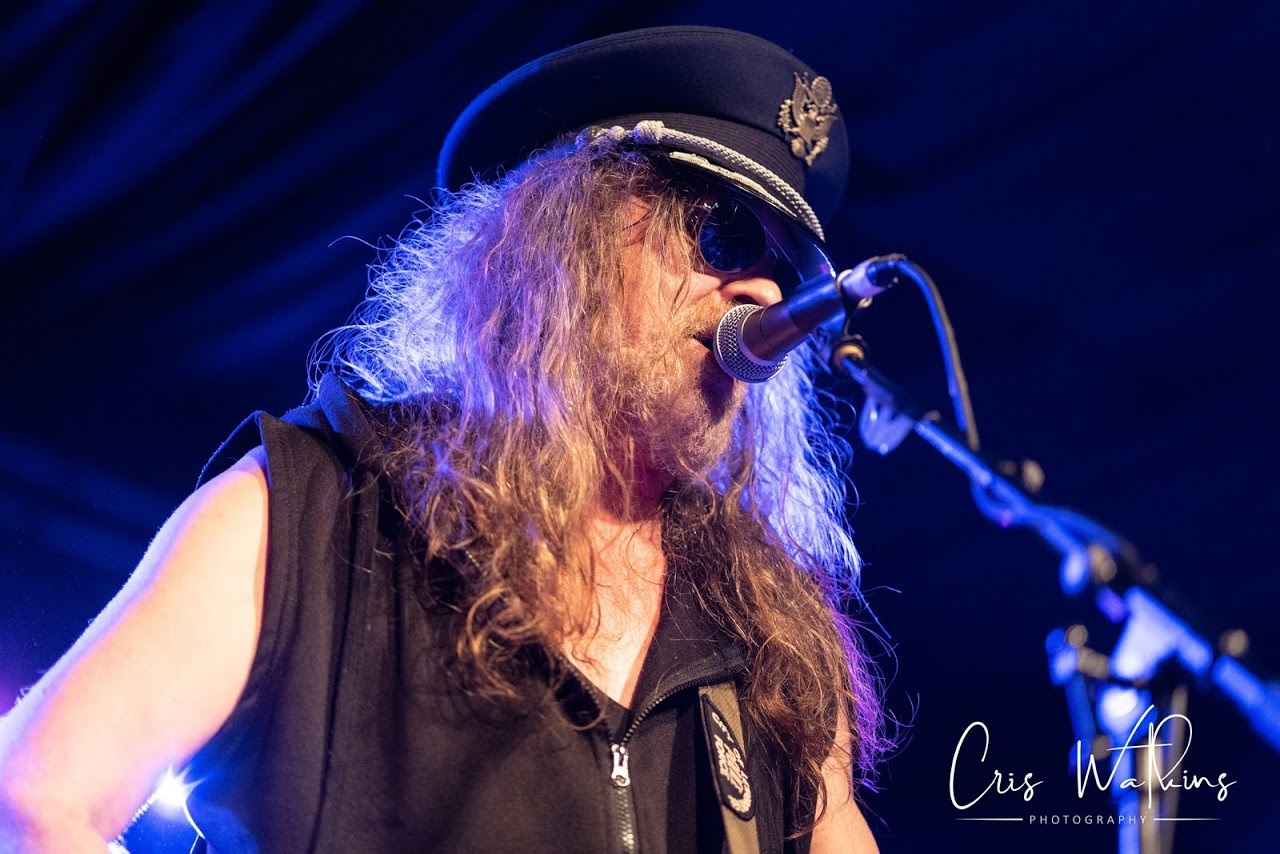 These days regarded as a tribal elder of the alternative music scene and something of a national treasure, Julian Cope first came to public attention forty years ago as frontman of post punk new psychedelics The Teardrop Explodes. With a mop of blonde hair and a trademark flying jacket, he was an engaging presence singing “Bless my cotton socks, I’m in the news”, the opening line of the horn driven ‘Reward’, a top ten hit in January 1981. Despite two moderately successful and well received albums, the band soon imploded in a morass of drug assisted personality clashes. Julian didn’t just talk the psychedelic talk, he walked the walk and crawled the crawl, notably with a turtle shell on his back for the cover of second solo album ‘Fried’. Slashing himself with a broken mic stand during a gig cemented a reputation for erratic behaviour.

Stopping short of becoming a total acid casualty, he moved to Island Records and enjoyed a return to mainstream chart success in the late 1980’s, belting out hits like ‘World Shut Your Mouth’ clad in black leather, perched atop a custom built mic stand, before embarking on a trilogy of albums themed on environmental concerns, beginning with ‘Peggy Suicide’ in 1991. Although critically acclaimed, the new direction was too much for Island Records, who bailed out after 1992’s ‘Jehovahkill’, leaving the final instalment, ‘Autogeddon’ (named after the epic poem by Heathcote Williams), and two subsequent solo albums, to be released on Echo.

Since 1997 Julian has been ploughing his own furrow with a more DIY approach, moving to Wiltshire and putting out material on his own Head Heritage label. A website of the same name provides a discussion forum, online shop, and platform for his own cultural commentary as the self styled ‘Archdrude’ of Wessex. He has branched out into writing, becoming a respected academic for his gazetteers of prehistoric stone circles, has published two volumes of autobiography and a novel, and forged an impressive reputation as a musicologist for his ‘Krautrocksampler’, ‘Japrocksampler’ and ‘Copendium’ titles. He is an enthusiastic champion of obscure psych music, and a political activist, noted for his involvement in the Poll Tax riots and Newbury Bypass road protests. Never shy of airing his righteous and often controversial views, he has evolved into something of a counter-cultural icon, and after releasing well over 30 albums is still big enough news to be selling out dates on a solo tour, including this one at Brighton’s Concorde 2. 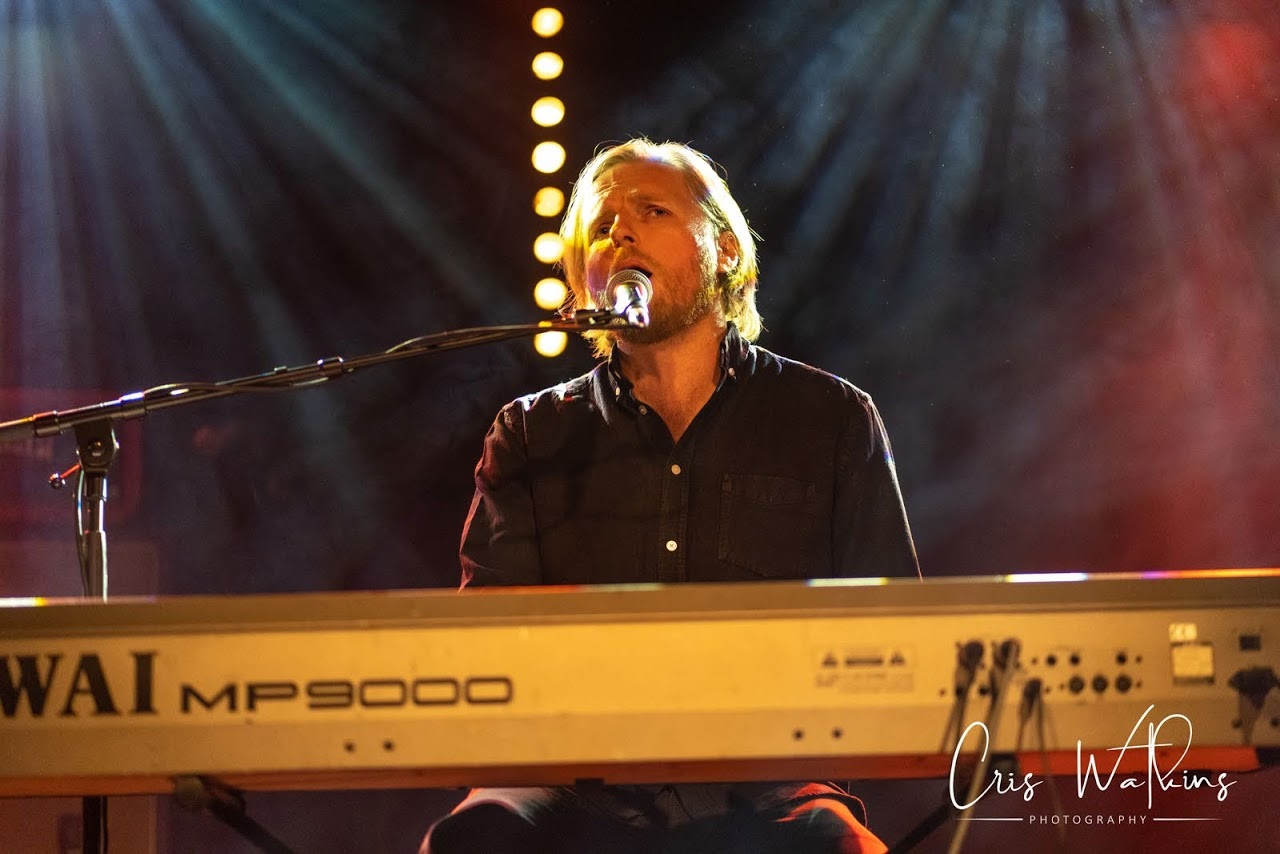 Support tonight comes from Tom Hickox, an earnest young man with blonde hair and a beard, seated behind a large Kawai digital stage piano. His deep rich voice sings wistful lyrical tales, set to beautifully poignant melodies. He has two albums of quality songs to draw on: ‘War, Peace And Diplomacy’ released in 2014, and ‘Monsters In The Deep’ from 2017. The more recent material seems slightly more upbeat musically, whilst his wittily downbeat lyrics have an interesting delivery that reminds me of John Grant.

Tom is accompanied on guitar by Sam Grimley, also bearded, who plays seated, hunched over a Stratocaster. There is some interesting interplay between the guitar and keyboard, and I particularly like this in closing number ‘Monsters In The Deep’, with the lead line dancing up and down a scale over rhythmic piano chords. I’d be interested to hear more.

Tim Hickox setlist:
‘Out Of The Warzone’, ‘The Pretty Pride Of Russia’, ‘Istanbul’, ‘Let Me Be Your Lover’, ‘The Dubbing Artist’, ‘White Roses Red’, ‘The Lisbon Maru’, ‘Monsters In The Deep’. 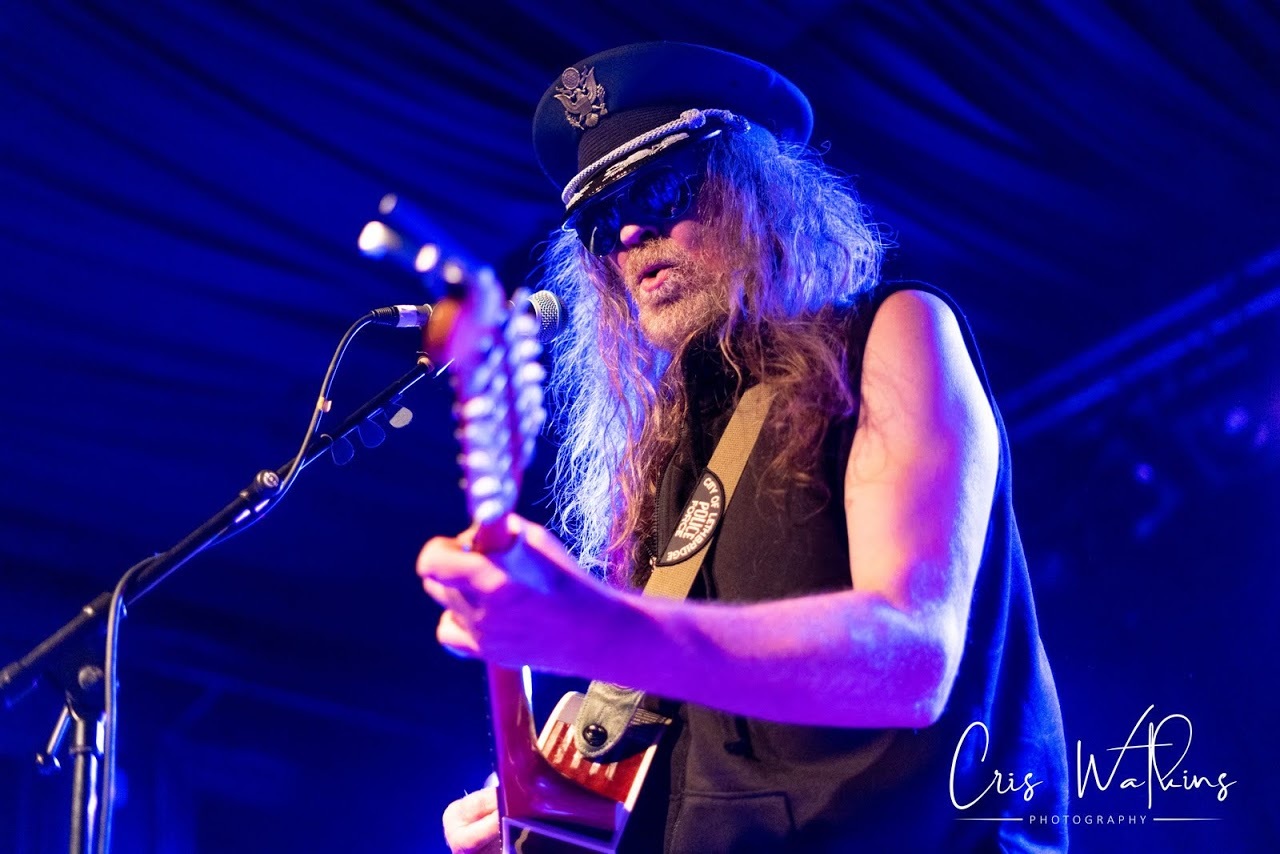 The long thin main room of Concorde 2 is full and buzzing with anticipation. My wife and I are right at the front and quite excited, the music of Julian Cope has provided a significant contribution to the soundtrack of our relationship since the 1980’s. A rack of 12-string guitars are prepped, ready for action, a Siel Audio analog string machine and another synth are set up house right, and a monstrous Matamp stack stands sentinel.

Live music here is early on Friday and Saturday, to allow the venue to accommodate a club night afterwards, so Julian Cope takes the stage promptly at 8.20pm to a massive cheer. He has a distinctive look which he has adopted for some years now: long blonde hair and a full beard, under dark sunglasses and an American military cap. He is dressed radically but comfortably in a black sleeveless top, long black shorts and jackboots, and the proximity of his bare knees is causing a bit of a stir in the front rows. A guitar tech hands him a 12-string acoustic emblazoned with a “WHEN WE RISE” motif, and we’re into the first number: ‘Soul Desert’.

I have to say, I’m not usually a fan of the solo acoustic touring medium for music originally made with a band. Julian has easily enough charm and charisma for a whole orchestra though, and with a strong voice and an array of pedals at his feet processing the guitar, it makes for an engaging presence and a very big sound indeed for one person. At the song’s play out, his vocal is mimicking the effect of his Morley wah wah, and the overall impression is powerful and moving. We’re off to a great start.

There’s a new album to promote, ‘Self Civil War’, and the very witty and instantly catchy ‘Your Facebook, My Laptop’, is up next. “Here’s one of those ‘bah bah’ songs,” says Julian, introducing ‘The Greatness And Perfection Of Love’ from his very first solo album, and referring to its poppy backing vocal. It’s three minutes of nostalgic bliss. ‘Autogeddon Blues’ has a very different vibe, and its lyrics about car culture’s effect on society and our environment sounds more topical than ever, 26 years on. As the song progresses, a killer combination of phase and wah elevates the guitar sound to a hurricane force howling scream.

There’s a pause for an amusing anecdote to introduce ‘They Were On Hard Drugs’, Copey’s theory on the motivation behind society’s achievements through the ages. He tells us that whilst visiting the valley in Wales from which the Stonehenge stones were quarried, he found 27 types of mushroom in one hour, four of which were psychedelic. “Put the kettle on!” shouts a wag in the audience, and everyone is in stitches. 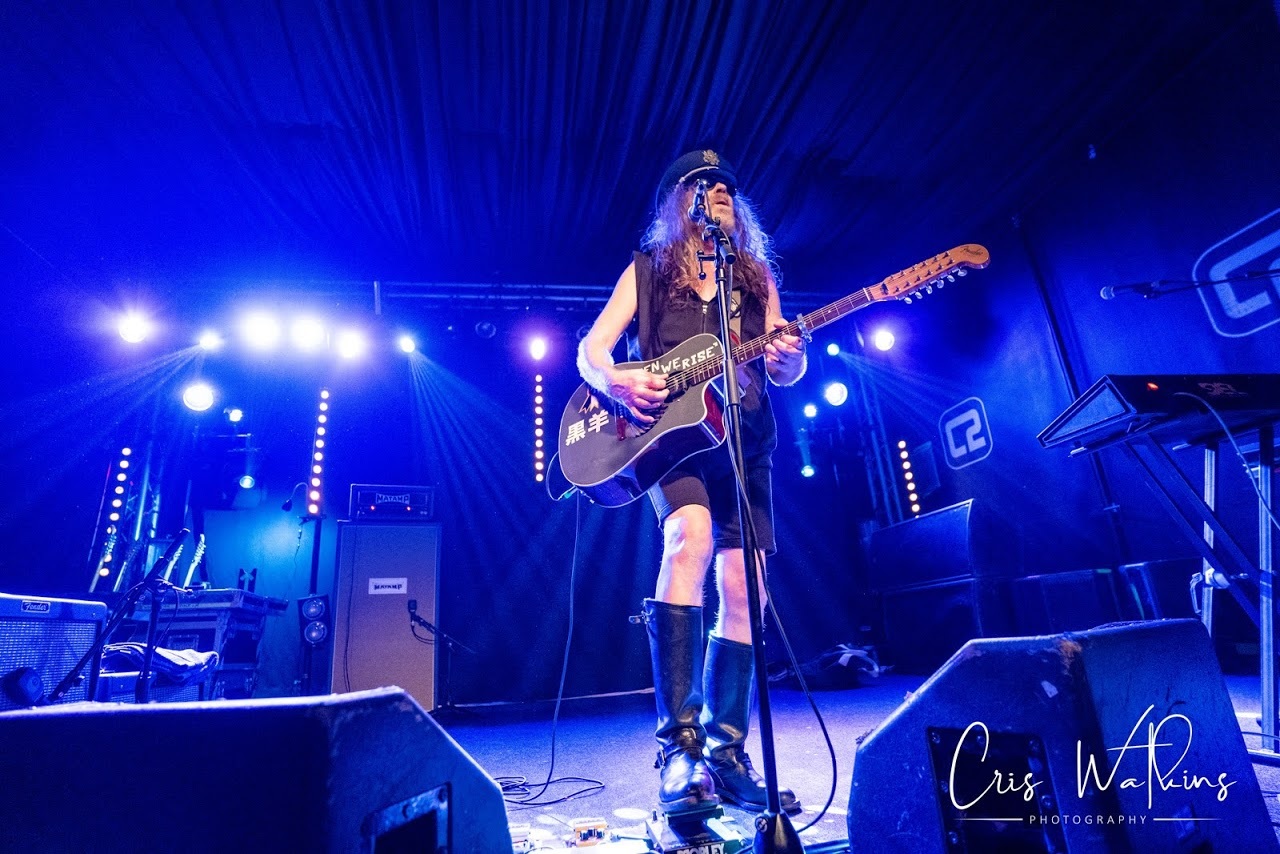 After the Teardrop Explodes’ classic, ‘Passionate Friend’ and the hilarious ‘Drink Me Under The Table’, there’s a long funny rant about folk music, since Julian is playing an acoustic guitar. “The trouble with folk music,” he jokes, “is that it’s written by the folk, not by professionals like me.” He launches into ‘Cromwell In Ireland’ as an example of how a professionally composed ditty might sound, which in this instance is a roaringly powerful list rant about some of the very worst people in history.

The tireless guitar tech who has been busy attending to Julian’s many and varied needs is introduced to us as Chris Holman. For ‘The Great Dominions’, Julian moves to the Siel keyboard and Chris joins in, holding down a single droning bass note on the second synth. This old Teardrop Explodes number is as vast, soaring, magnificent and desolate as the title would suggest.

After the charming ‘I’m Your Daddy’, there’s another amusing anecdote about the lexical uses of the ‘F’ and ‘C’ words. Americans apparently find the common English phrase “f*ck off” too finite, preferring “f*ck you” instead. In Ireland, even the ‘C’ word, sweariest and most terrible of all, can be a term of endearment. The example given is of a kindly farmer, having watched the Antiquarian Cope fail to locate a stone circle, inviting him to “Jump on me tractor, oi’ll give you a lift there, you c*nt.” I’m not sure Julian is using it in quite that sense in his following musical analysis of capitalism: ‘C*nts Can F*ck Off.”

In ‘Immortal’, another excellent song from the new album, the narrator boasts of his drug ingesting capacity to show off to a potential partner. I can’t say that’s ever worked for me. After a fine rendition of 1986 hit ‘World Shut Your Mouth’, there’s a break for Chris the guitar tech to spray Julian’s hands with Deep Heat spray (other brands are available, I imagine). I notice this is actually scheduled in the set list, suggesting that tour experience has proved how many numbers our hero can play before his hands seize up.

‘Treason’ is a hit from the days of The Teardrop Explodes, and there’s another anecdote to introduce ‘Sunspots’ from ‘Fried’. Julian tells us how his record company wouldn’t let him release a 12-inch single version, and gets a big chorus of pantomime “aaahhh”s in response. The song is magnificent, and he goes into an improvised extended version, in lieu of that 12-inch mix of which he was so cruelly deprived back in the day.

The curfew is approaching, and ‘Pristeen’ from the classic ‘Peggy Suicide’ album has to be the last song. The crowd are baying for more though, and there is just time for a cheeky encore of the charming ‘Robert Mitchum’ before we have to make way for whatever goes on at a club night these days. It’s been a fantastic evening’s entertainment. Julian Cope is a living legend and absolutely splendid company. 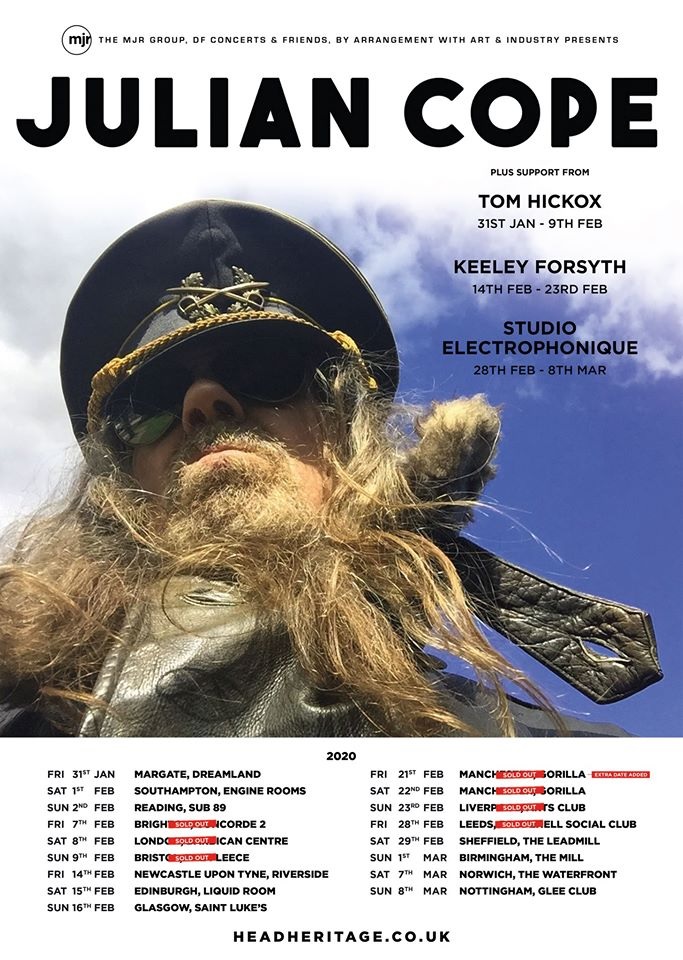