The Murder Capital play the capital The Murder Capital are, along with Fontaines DC, part of Dublin’s apparent post-punk revolution. However, like Fontaines DC, they are not simply copying a style, they are taking it further. We at the Brighton & Hove News are also taking it further, as this time around, the band’s 10-date UK tour sadly omitted an appearance in Brighton. So we travelled up to the Electric Ballroom in Camden to see them.

Musically, the obvious comparison is Joy Division. Not just because of the Stephen Morris style drum tattoos, but also because of James McGovern’s very impressive baritone. McGovern, like Ian Curtis, is also the lyricist, and what lyrics! He is influenced by 21st Century issues such as homelessness and society’s burgeoning problems with mental health. Whilst the songs are not specifically anthems for doomed youth, the gut-punch of the ‘When I Have Fears’ album’s opening line “I am a blissless star, corroded through the core” (from ‘For Everything’) sets the tone to a large extent. This all translates very well to the live stage. Indeed, dark though many of the lyrics are, the band performing live are a joyous, celebratory spectacle. The songs are powerful and the playing is often very atmospheric. The lead guitar is sometimes reminiscent of David Gilmour from Pink Floyd of all people! The effects used embellish the playing without overpowering it. The songs too are expanded beyond their recorded equivalents.

James McGovern is already a skilled frontman. He tells the crowd that the UK feels like home to the band. Well, you’re welcome James! He jumps into the photo pit and sings to the front row. At one point he and the band tell the crowd to sit down, and they comply. Towards the end of the set he crowd-surfs. The Murder Capital already draw a very partisan crowd. London audiences often have an air of waiting to be impressed – not tonight at the Electric Ballroom! Once the band and audience have warmed up, there are frequent outbreaks of mass moshing, and at the end of the gig (there is no encore) there is the biggest crowd around the merch stand. There is one bloke trying to serve them.

This is a band who have clearly very much arrived. They don’t need any advice from a hack like me. However, I would say: have at least two people working the merch stand!!! Great gig: what more can I say?

All of the tunes performed tonight can be found on The Murder Capital’s ‘When I Have Fears’ UK top 20 debut album, which was released on 16th August 2019, purchase/listen to it HERE. 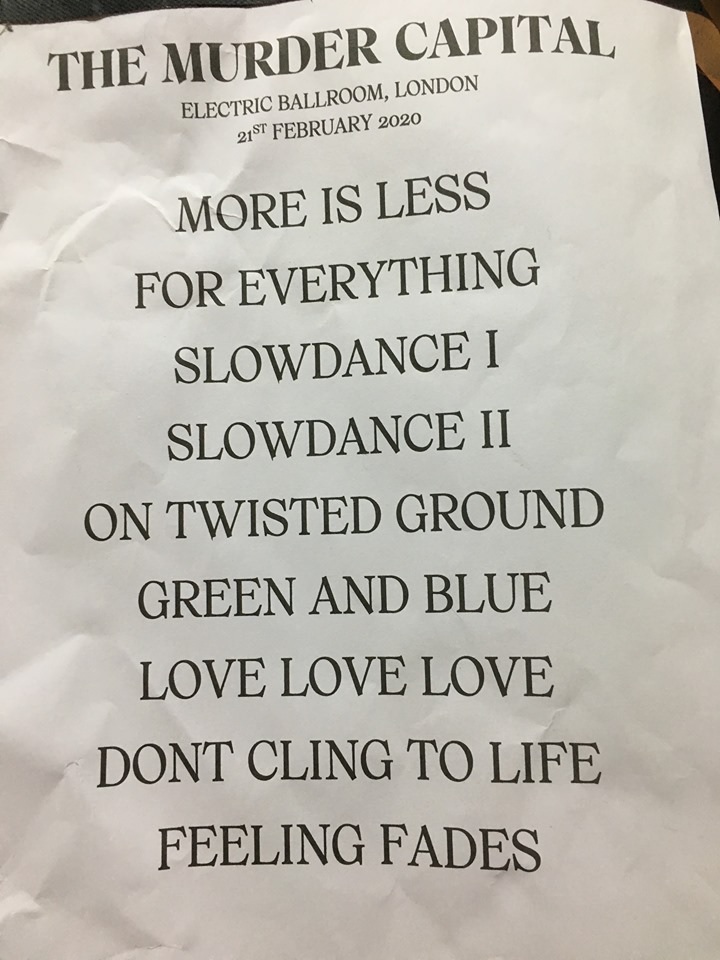